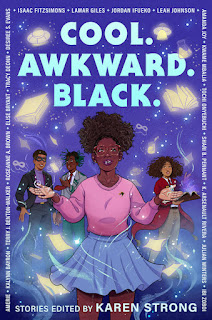 I love the variety here - geeks of all sorts, and a wide range of genres. From contemporary, to sci-fi, to fantasy, we get to see a bunch of tremendous authors exploring the theme in a variety of ways. There's sweet romance from Elise Bryant, surely one of the most talented authors to debut over the last few years, the superb Leah Johnson and Julian Winters, who I need to read more of because I'm dazzled by everything I HAVE read of his. We have a couple of intriguing stories in which contemporary settings take a real twist, as K Arsenault Rivera's "Initiative Check" sees an RPG come to life, and Amanda Joy's "The Panel Shows The Girl" has a similar idea, but with the main character's sketches having a strange effect on her classmates. And there's sci-fi, most notably Ibi Zoboi's "Earth Is Ghetto" about an MC who's been contacted by aliens and is ready to leave with them once they appear.

There's lots here I'd like to see more of - in particular, Tracy Deonn's "Catalyst Rising" is stunning, but the ending seems to be begging for a follow-up, and while "Wolf Tracks" by Roseanne A. Brown worked perfectly as it was, the characters - a gay boy from a line of men who transform into wolves in the presence of the people they're in love with, his family, and his love interest, are so wonderful that I'd be intrigued by more.

"Our Joy, Our Power" by Julian Winters - waiting to go into a convention ball, a boy distracts himself from thinking of a loss in a cosplay contest - and the microaggressions in his feedback - by talking to another cute guy as they both wait for their chronically late best friends. This is a gorgeous read, with instant chemistry between the pair, and a perfect start to the anthology.

"Spirit-Filled" by Jordan Ifueko - A teenage girl, daughter of staunch Republican Christians, starts to question her family's viewpoints as she reads epic fantasies that she knows her parents wouldn't approve of, and finds support from an unlikely person. Lots of fun, Romily, the MC, is wonderful.

"Cole's Cruise Blues" by Isaac Fitzsimons - This was one of my most anticipated - I really loved Fitzsimmons's The Passing Playbook - and lived up to expectations. It's the story of Cole, a 14-year-old trans boy seeing his father for the first time in four years, going on a cruise with his 10-year-old stepsister and their parents. The two siblings connect, while Cole also meets a guy he likes. Really love the blossoming connection between Cole and Evan here, and the warmth of the family relationships.