Six years after I originally ran the feature, it's the return of Indie Advent! I'm really happy to be able to do a tiny bit to help promote amazing indies after such an incredibly tough year for them, and thrilled that I have people signed up to write about shops from England, Scotland, the USA, and Canada. There are a few spaces left if anyone else is interested in writing something - leave me a comment on this post or tweet me @yayeahyeah.

But no more delay, let's get things started! First up, Martin Griffin, fabulous YA author, tells us about Chorlton Bookshop in South Manchester. 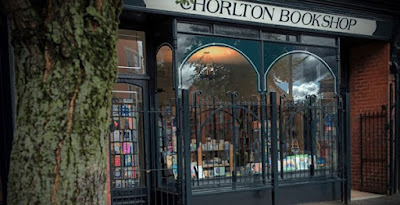 There are a thousand things that indie bookshops offer over and above online retailers, but the foremost for me? The front window. I’m not going to give you a childhood sob-story or indeed any of that David Copperfield crap, but I did spend a lot of time as a teenager and young adult – the early nineties, no internet – looking at books through windows. They were a treasure as unattainable as the stuff on display in the jewellers back then, but the window at least meant I knew that they existed. Nowadays if you’re struggling for cash, you might be doing so in a neighbourhood with no physical representation of art at all – just a main drag of shiny gewgaws. High Street front windows are a display of possible future purchases on the one hand, but they’re also a symbol of the culture we aspire towards on the other.

My favourite bookshop – pictured above – has lovely ironwork, presumably a throwback from those days when joyriding Manchester thieves used to ramraid them and make off with Jeffrey Archer novels, but behind the grille it also invariably has a wonderful display, particularly at this time of year. Things shimmer and glow and rotate. Books are displayed like they’re polished gems in the snow. You can even see the publisher-specific carousels; Picador, Paladin, Virago. Inside the modest space, every available square foot is used to display and promote beautiful books. It’s got a lovely homely vibe. There’s even a Victorian fireplace in the back corner of the children’s section.

I’ll be through those doors as soon after reopening as I can. I’ve got an eye on a few choice items that will brighten the winter. There’s a new Tana French novel called The Searcher. Now that French has left the Dublin Murder Squad sequence behind, she’s exploring place and culture in a different way and this new one looks like it will be is intricately constructed as her other work. If you’re just starting out with French, may favourite is Broken Harbour, a taut psychological tale of paranoia and murder. I’ll also be bagging Alma Katsu’s The Deep, a ghost-story set on the Titanic and its sister ship. Katsu writes creepy historical-supernatural superbly and I loved The Hunger. A few more, you say? OK then – let’s talk about Chris Hammer. I enjoyed a fascinating interview with him recently, an insightful dive into his writing process, and I feel compelled to check out his work. I’m going to begin with his first, Scrublands, which I’m excited about being a sucker for anything set in the outback. And I want to dive into some exciting writing for younger readers too, so I’ll be checking out Orion Lost by Alistair Chisholm, Dan Smith’s Invasion of Crooked Oak and a timeless classic for all ages that I haven’t yet read – Gary Paulsen’s Hatchet.

So many plans, so little time. Roll on December the 2nd eh?

Martin (M.A.) Griffin writes fiction for teens and adults. His debut, The Poison Boy, was published under the pseudonym Fletcher Moss. It won the Times Children’s Fiction Competition and was shortlisted for the Branford Boase, the North East and the Leeds Book Awards, among others. Lifers and Payback, two YA thrillers, were shortlisted for North East, Cheshire, Wirral and Leeds Book Awards. He is also a writer of best-selling non-fiction.