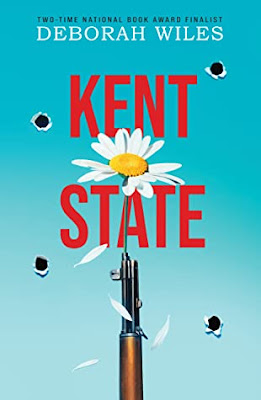 Told in verse, Kent State is a book about people looking back on the event of May 4th, 1970, in which four American students - Sandy Scheuer, Allison Krause, Jeffrey Miller, and Bill Schroeder - protesting the Vietnam war were killed by National Guardsmen.

This is an impactful read which will definitely stay with me - as a Brit who wasn't born at the time, I knew vaguely of the terrible events the book covers, but wasn't aware of any of the details. Wiles conveys the full horror of the shootings, and the events of the weekend leading up to them, using the powerful technique of having six voices - representing students both white and Black, townspeople and the National Guard - look back on the events and argue over their interpretations of them. We find out little about the speakers themselves, other than getting a rough idea of what group they're representing; an interesting stylistic choice which for me added to the book by making it read more like a non-fiction book than a novel.

It's a bleak book, as you'd expect from the subject matter, and Wiles doesn't hold back, describing the exact injuries which killed the four victims. But it's also a powerful one, which does a great job of looking at why people hold different views of tragic events, and a timely one given the current political climate. I would definitely recommend this as a read which, despite its short length, will give you plenty to think about for a long time after reading.