Book Review: In The Role Of Brie Hutchens by Nicole Melleby 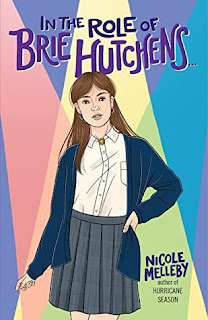 In The Role Of Brie Hutchens by Nicole Melleby (Algonquin Young Readers) - Brie is horrified when her religious mom walks in on her just as she's accidentally looking at inappropriate pictures of an actress she has a crush on. To distract her, she blurts out news that she knows will delight her mother, telling her she's been chosen to crown the statue of Mary in a big ceremony at school. It works - but Brie's lying, and the job only ever goes to a top student, which she certainly isn't. Can she somehow get out of this mess, and will star student Kennedy, who's suddenly looking a lot more attractive than Brie ever realised before, be able to help her?

This is a gorgeous coming-of-age story and as a fellow soap fan I loved the way Brie turned to soaps to prepare for a drama school audition, as well as figure out things about her own sexuality. I was especially impressed by the way that Melleby portrayed the conflict between Brie and her parents - most coming-out stories I can think of seem to include family members who are either supportive pretty quickly, or really terrible. This goes for a middle route, and is no doubt going to be useful and reassuring to teens finding themselves in a similar position. (But I loved that Brie had a really supportive friend and two teachers who were brilliant at backing her up.) It also looks at financial insecurity - Brie's father has recently lost his job and both parents are struggling with this - and does a great job of exploring that too. Massively recommended.