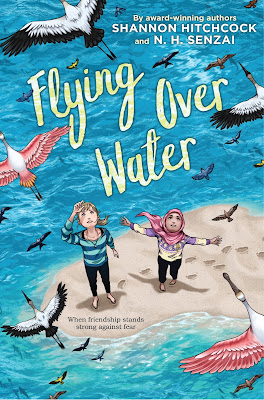 Noura Alwan and Jordyn Johnson are two twelve-year-old girls who've lived very different lives, who meet when Jordyn becomes Noura's school ambassador. Noura is an immigrant from Syria, along with the rest of her family, and the pair quickly become friends. Meanwhile, their parents are also getting to know each other, with Jordyn's mother - grieving a recent miscarriage - teaching English to Noura's mother, who repays her with cooking lessons. But not everyone in the community is as welcoming as Jordyn and some of the girls' other friends, and both Jordyn and Noura have to find their voices to stand up to hatred.

This is a really sweet dual narrative story looking at the problems faced by both girls. Jordyn feels guilty for not really wanting a baby sibling until her mom miscarried, while her mother, in particular, is struggling to come to terms with her loss. Noura and her family have fled to safety, but it's hard for them to feel safe when they see the Muslim ban on a national level being discussed (the book is set in early 2017) and protests closer to home as well. Both girls' hopes and fears are well-portrayed, and I loved the school community. While there is some hatred - as you'd expect from the summary - there is much, much more friendship and compassion shown by both fellow students and staff. There are lovely scenes with Jordyn and her swim coach gently teaching Noura, who's initially terrified of the water because of something which happened to her friend back in Syria, how to swim, and there's a very positive portrayal of therapy, which Jordyn goes to to help deal with her anxiety. There's also great religious rep - in addition to Muslim Noura and Christian Jordyn, there's a Jewish boy, a Hindu girl, and a girl whose family don't practice organised religion, all of whom come together to support each other and the main two.

While there's never any sugarcoating of the level of anger some people feel towards Muslims, or of the anxiety attacks Jordyn suffers from, it's nowhere near the bleak book that it could have been - the friendship and the warmth shine through and make it an enjoyable read as well as an important one. (Perhaps particularly in the mouth-watering descriptions of various foods!) Massively recommended, and this is one that I could see being a great class read in schools.