Book Review: This Train Is Being Held by Ismée Williams 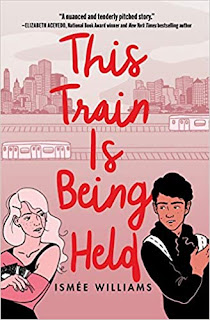 This Train Is Being Held follows Isa, a Cuban ballet dancer whose life is falling apart, and Alex, a Dominican baseball player, with the potential to surpass his father's short career in MLB, but a burning dream to write poetry. After a couple of subway meet-cutes, the pair fall for each other, but can their new love survive their family problems, and their different cultures?

I was expecting a fairly light read here and got so much more than that! This is a very good romance with two likeable POV characters whose chemistry is excellent, but it also looks at some deep themes. In particular, Isa's mother and her brother both have mental health issues, while her father loses his job in the course of the book, Alex faces racism and sees one of his friends get dragged into a gang, while white-passing Isa doesn't have to deal with this kind of thing, and there's several clashes between what the MCs want and what their parents expect. Alex's father had a very short professional career and he's desperate to see his talented son succeed to a far greater degree than he ever did, while being constantly hard on Alex's younger brother who doesn't have the same amount of skill at baseball. Isa's mother, in particular, has views on her daughter's future which definitely don't include a career as a ballet dancer, or a Latino boyfriend.

As much as I enjoyed the central relationship, particularly the way Isa encourages Alex to follow his poetic dreams, it's perhaps the skilled way in which these heavier issues are dealt with which made this such a truly fantastic read for me. The portrayal of Isa's mother and brother feels really nuanced and brings home the difficulties of living with someone with bipolar disorder. The novel is also at its best when dealing with racism, especially in a scene when Alex's papi loses his temper with his younger son as they play baseball, and the police get involved.

Massively recommended as one of the most compelling contemporary books of the year so far for me.

Email ThisBlogThis!Share to TwitterShare to FacebookShare to Pinterest
Labels: contemporary, YA