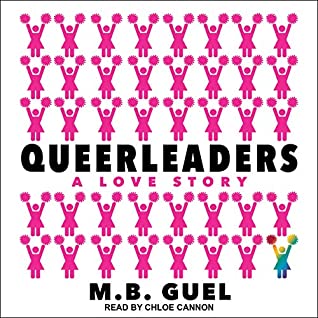 Queerleaders tells the story of Mack, a teenage girl at a Catholic high school who's crushing hard on head cheerleader Veronica. Outed against her will by Veronica's jackass boyfriend, Mack finds herself claiming she'll pay back the jocks who bully her for her sexuality by stealing all of their girlfriends. Despite the help of her best friend Lila and her parents, it seems a tall order, but a few of the cheerleaders are interested for various reasons - will she succeed? And could she find love on the way?

I've never managed to listen to an audiobook in full before this one - I have major attention span issues and have never been able to focus on one. I've just taken up running/jogging/fast walking, though, and decided to give this a try. The combination of MB Guel's writing and Chloe Cannon's narration worked perfectly together to create a fun read which totally captured my attention. Guel's novel is reminiscent of 90s teen rom-coms like She's All That and 10 Things I Hate About You, although an interesting twist is added with all of the cheerleaders seeming to be well aware of the bet.

There's a ton of homophobia here, with the school authorities being fervently against same-sex relationships, and most of the students initially seeming to go along with this, but as long as you can get past that then it's an upbeat read with a truly joyful ending (at a prom, just like so many classic teenage movies have!) On the way to that wonderful climax, we get a really sweet novel focusing on not just Mack's quest to get the cheerleaders to kiss her, but also the friendship between her and Lila. Mack and Lila are one of my favourite parts of the book, with Lila initially being supportive but quickly (and justifiably!) getting irate as Mack starts to ignore her as she's so focused on the bet, and the heady sensation of being popular.

The main cheerleaders who Mack gets involved with are also good characters, and Cannon's different voices do a great job of capturing their distinct personalities. Special mention has to go to Mack's mom and dad, too - the scene where she officially comes out to them is both hilarious and super-sweet, and I loved seeing how much they cared about her and supported her.

In addition to the romance, I loved the focus on a couple of friendships, and the way the book looked at different people's expectations of teens - ranging from the heteronormativity of the school as a whole, to the way in which characters are put into boxes by different people, even when they may have surprising aspects to them.

A really good read and I'm looking forward to more from both this talented author and this awesome narrator!

Email ThisBlogThis!Share to TwitterShare to FacebookShare to Pinterest
Labels: audiobook, reviews, YA