Book Review: The Beauty That Remains by Ashley Woodfolk 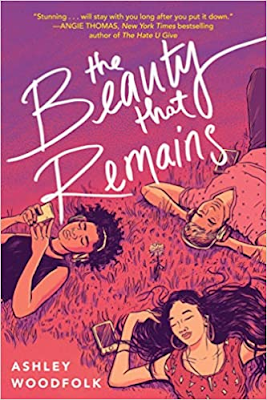 The Beauty That Remains is a YA contemporary novel following three teens grieving for people they were close to - Autumn, whose best friend Tavia died in a car accident, Shay, whose twin sister Sasha passed away from leukemia, and Logan, whose ex-boyfriend Bram was found dead after a drug overdose. As all three struggle to cope in different ways, their love of the local music scene, and the support of their friends and family, starts to help them heal.

I've been eager to read Ashley Woodfolk's first novel since I was captivated by her 2020 release When You Were Everything, so I was super-excited when my wife got this for me from our local library. It absolutely exceeded the high expectations I had after reading WYWE - I love both books, but in different ways. Here, I'm amazed that Woodfolk - then a debut author - did such a great job of portraying such a sprawling cast of characters. In addition to the large cast of well-developed teens, the three dead friends are all given real depth; Tavia through the e-mails Autumn sends her even after she's passed away, Sasha from the brief album reviews which start Shay's chapters, and Bram from the way the people around him talk about him. The strength of the friendships and the relationships, both with the dead and those who are left, packs a powerful punch - perhaps especially the way Logan reconnects with Bram's mother, and starts to tentatively get to know Yara, the girl who Bram dumped him for.

I loved the support network which developed and thought the way that connections were revealed between the three main characters as the book went on worked really well, especially as we learn more and more about Logan's former band, Unraveling Lovely, hyped by Shay and Sasha on their BAMF and also including Tavia's brother Dante and Autumn's friend Rohan.

It's very hard-hitting - Sasha suffers from panic attacks, Autumn from depression, and Logan is drinking heavily to try and cope. However it's a really hopeful read which shows how help from both professionals - Logan's scenes with a therapist are stand-out ones - and from friends and family can help people in this awful situation pull through. There's also sweet romance between Dante and Autumn and Shay and another of her friends. Overall, this is a gorgeous read and I'm excited for more from Ashley Woodfolk - especially the Flyy Girls series, the first two of which were released last month.