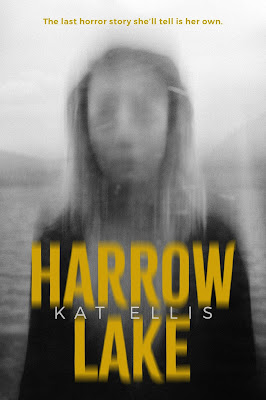 Thrilled to have another 5-4-3-2-1 today with Kat Ellis, author of the incredibly creepy YA horror novel Harrow Lake, published by Dial Books.

So I've gone from being a big fan of people like John Saul and Richard Laymon as a teen myself, to not reading any horror for ages because I'm so easily scared now. I know there's other great YA horror out there, though - if getting through Harrow Lake (even only reading during daylight hours!) has got me up for more, any recommendations?

Good Girls Die First by Kathryn Foxfield – an abandoned pier, ten teens with dark secrets, and a whispering villain picking them off from the shadows… this is Agatha Christie meets Point Horror, bringing both bang up to date for teen readers.

Hold Back the Tide by Melinda Salisbury – in an isolated Scottish village, something lurks deep in the nearby caves… this is like The Village meets The Descent, with Melinda Salisbury’s usual stunning prose, and characters you root for.

Teeth in the Mist by Dawn Kurtagich – a gothic horror inspired by the legend of Faust and set in the Welsh mountains, this epic story spans three timelines and ties together the fates of three very different girls.

Uzumaki by Junji Ito – a graphic novel about a Japanese town which has become infected by spirals. One by one, its inhabitants succumb to ever more grisly and twisted (pun absolutely intended) fates.

Last One To Die by Cynthia Murphy – this one comes out in January 2021, but I was lucky enough to read it early. It’s a fabulous thrill-fest set in London, where a Ripper-esque murderer targets girls with a striking resemblance to our main character, Niamh.

Harrow Lake is trapped in the past for several reasons, one of which being the tourist industry centred around Nolan Nox's Nightjar, which sounds incredibly spooky. What are your favourite creepy films?

Event Horizon – I’m a huge fan of sci-fi horror, and this one takes the ghost ship trope to the next level! It also stars Laurence Fishburne and Sam Neill, which makes it a must-watch.

Get Out – a young Black man goes to meet the parents of his white girlfriend, and there he finds a small town hiding a monstrous secret. This movie takes the idea behind Stepford Wives and puts a much creepier, racially-themed spin on it.

Jennifer’s Body – Jennifer is murdered by a fame-seeking indie band, but the ritual sacrifice goes wrong, instead leaving her possessed by a demon and feeding on men to stay alive.

The Babadook – an Australian widow is worried when her son begins displaying violent behaviour, becoming convinced the monster from his picture book is real. This one is smart, and deals with themes of anxiety/depression as well as providing plenty of scares.

I love weird small-town settings and Harrow Lake is one of the weirdest of them all! Seeming to be perpetually stuck in the past, with mysterious disappearances happening, it's great to read about but it's definitely not somewhere I'd like to stay. Which small towns are the ones you'd least like to spend a night in?

Derry from It by Stephen King-- especially if it was coming up to 27 years from the last Pennywise appearance! (I’ve never been a fan of storm drains.)

Twin Peaks – despite its damn fine coffee and cherry pie, there’s way too much weirdness in Twin Peaks for me to spend a night there.

Blackfin from Blackfin Sky/The Twins of Blackfin by me! It’s not cheating to say another creepy town I created, is it?? Because all kind of strange shenanigans happen in Blackfin: girls return from the dead, eerie voices summon sleepwalkers from their beds, circus bells chime deep in the woods, and the weathervane on the school roof is haunted. (Yes, I definitely have a thing for small-town creepiness.)

As I mentioned at least once on Twitter, Harrow Lake took me substantially longer than most books to read because I didn't dare pick it up once it was dark out - it's truly chilling! Can you think of any times you've been especially scared at night, either as a result of what you'd been reading/watching or due to things happening?

I have occasional bouts of sleep paralysis, which generally involve having terrifying nightmares where something is coming to get me, and I can’t move or scream or wake myself up. I’m usually nudged awake because I’m making a weird animal sound in my sleep (fun for all involved, I’m sure you’ll agree).

When I was about 8, I also went through a spell where I couldn’t sleep in my own room because a massive spider kept tapping its legs on the wall above my headboard at night. It eventually disappeared without a trace.

One of the things likeliest to give me nightmares is the urban legend (or is it?) of Mr Jitters, who supposedly became a cannibal after a landslide trapped him with a bunch of dead bodies. What’s the urban legend that scares you the most?

I have to give a shout-out to Slender Man here — this legend is pretty new, born on an internet forum in 2009, but the sometimes-tentacled figure in the woods definitely creeped me out when I heard about him! He’s partly responsible for inspiring Mister Jitters, not to mention several books, movies, video games, and a real-life attempted murder in 2014.

A can't-put-down, creepy thriller about the daughter of a horror film director who's not afraid of anything—until she gets to Harrow Lake.

Things I know about Harrow Lake:
1. It's where my father shot his most disturbing slasher film.
2. There's something not right about this town.

Lola Nox is the daughter of a celebrated horror filmmaker—she thinks nothing can scare her.

But when her father is brutally attacked in their New York apartment, she's quickly packed off to live with a grandmother she's never met in Harrow Lake, the eerie town where her father's most iconic horror movie was shot. The locals are weirdly obsessed with the film that put their town on the map—and there are strange disappearances, which the police seem determined to explain away.

And there's someone—or something—stalking her every move.

The more Lola discovers about the town, the more terrifying it becomes. Because Lola's got secrets of her own. And if she can't find a way out of Harrow Lake, they might just be the death of her. 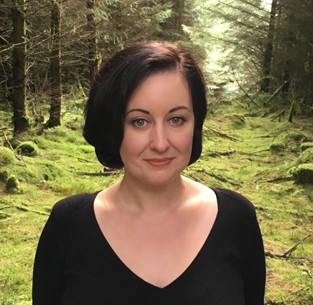 Kat Ellis is a young adult author whose novels include Blackfin Sky, Breaker, Purge and Harrow Lake. She is a self-proclaimed sci-fi geek, and a keen explorer of ruins, castles and cemeteries – all of which are plentiful in North Wales, where Kat lives with her husband.

You can find out more about Kat at www.katelliswrites.com or connect with her on Twitter @el_kat.

Email ThisBlogThis!Share to TwitterShare to FacebookShare to Pinterest
Labels: 54321, YA