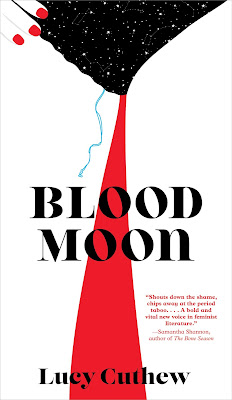 I'm thrilled to be bringing the return of a feature I originated on the Teens on Moon Lane book blog I used to run, 5-4-3-2-1! In this feature, I catch up with an author, give them a choice of questions to answer, and they respond to one of them with 5 answers, another with 4, and so on. First up in this version of the feature, Lucy Cuthew, author of the outstanding Blood Moon, published by Walker Books US.

There seems to have been a huge rise in the number of verse novels published over recent years, and in the amount of attention they're getting, which is fabulous! Other than Blood Moon, could you tell me some of your favourite verse novels?

Long Way Down by Jason Reynolds

One by Sarah Crossan

The Black Flamingo by Dean Atta

The Girl and the Goddess by Nikita Gill

Periods are something that are sometimes thought of as taboo, even though as Frankie says - #itsonlyblood. What other 'taboo' subjects would you like to see discussed more in YA novels?

We can see right from the start of the novel how important astronomy is to Harriet. What things in astronomy inspired you?

In 2017 LIGO detected the gravitational waves from the collision of two neutron stars. The waves literally warped space and time. They were hypothesized by Einstein but this was the first time they were actually detected. More here if anyone missed this. It was AMAZING!

The moon – every time I see it, I love it. It never loses it’s power. It’s so beautiful.

I loved the way the girls in the Beans on Toast WhatsApp group supported Frankie, even as they navigated the troubled waters of a major friendship issue. Who are some of your favourite groups of fictional friends?

Blood Moon is a fabulously feminist read! Name a feminist you admire.

This powerful, timely novel in verse exposes provocative truths about periods, sex, shame, and going viral for all the wrong reasons.After school one day, Frankie, a lover of physics and astronomy, has her first sexual experience with quiet and gorgeous Benjamin—and gets her period. It’s only blood, they agree. But soon a gruesome meme goes viral, turning an intimate, affectionate afternoon into something sordid, mortifying, and damaging. In the time it takes to swipe a screen, Frankie’s universe implodes. Who can she trust? Not Harriet, her suddenly cruel best friend, and certainly not Benjamin, the only one who knows about the incident. As the online shaming takes on a horrifying life of its own, Frankie begins to wonder: is her real life over?Author Lucy Cuthew vividly portrays what it is to be a teen today with this fearless and ultimately uplifting novel in verse. Brimming with emotion, the story captures the intensity of friendships, first love, and female desire, while unflinchingly exploring the culture of online and menstrual shaming. Sure to be a conversation starter, Blood Moon is the unforgettable portrait of one girl’s fight to reclaim her reputation and to stand up against a culture that says periods are dirty.

Lucy Cuthew has published more than thirty children’s books, including picture books, educational titles, and nonfiction, and she regularly speaks on the subject of children’s books for the BBC. She was a children’s editor for more than ten years and recently graduated with a master’s in writing for young people from Bath Spa University. Lucy Cuthew lives in Cardiff, Wales, with her husband and young twins.

Email ThisBlogThis!Share to TwitterShare to FacebookShare to Pinterest
Labels: interview