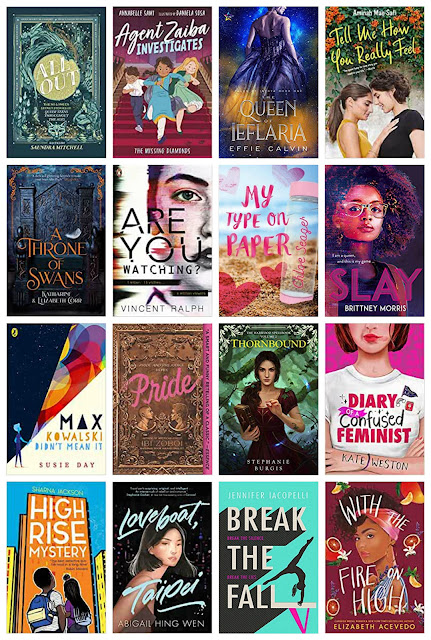 I blasted through my year-long reading slump in style in January, averaging a book a day. This was partly due to more spare time than I’d had for a bit, but mainly down to two things – my use of the “ten by twenty” idea to help me focus more, and an amazingly good streak of picking books that I was really keen to read. One of my favourite things, looking back, was seeing just how many of the books I read featured characters with really strong passions for their interests. Starting off with The Lady’s Guide To Celestial Mechanics by Olivia Waite (Avon Impulse), which has a main character struggling to break into the male-dominated world of science in early 19th century England, and a female love interest for her who is starting to see that her embroidery can be considered art, and going through to Kate Weston’s Diary of a Confused Feminist, (Hodder Children's) with a lead who is doing her best to be a good feminist while not always being 100% sure what one looks like, there were so many examples of great characters with hobbies and career plans they cared about deeply. Others in this vein were Keira, the VR game designer heroine of Brittney Morris’s SLAY (Hodder Children's), Olympic hopeful gymnast Audrey in Jennifer Iacopelli’s superb Break The Fall (Hodder Children's), young mom Emoni in Elizabeth Acevedo’s gloriously lyrical With The Fire On High (Hot Key) – taking culinary arts and trying to transform her talent at food preparation into a career – and aspiring film director Rachel and potential future doctor Sana in Aminah Mae Safi’s Tell Me How You Really Feel (Feiwel &Friends), the whip-smart rom-com for anyone who realises Paris was BY FAR the best match for Rory in Gilmore Girls.

Another really interesting theme that ran through many of my reads was the conflict between expectations – whether they were a character’s own or that of their family – and what they really wanted. Tell Me How You Really Feel starts with Sana deliberately pulling a risky move in an important interview because she needs to try and find out for herself whether being a doctor is the right career for her, Loveboat, Taipei (Simon and Schuster) by Abigail Hing Wen sees another girl expected to become a doctor try to figure out how to chase her passion for dancing, and adult romance The Truth of Things by Tasha L Harrison (Dirtyscribbler Press) has a wonderful female lead who has a good job as a press photographer but is more passionate about her side hustle, shooting weddings. Then there’s Cassandra Harwood in Snowspelled (Five Fathoms Press) and Thornbound (Five Fathoms Press) by Stephanie Burgis, supported by her family but having defied the expectations of an entire nation (the alternate history Angland) to become the first female magician, only to lose her powers. And family played a hugely important role in so many of my reads last month – I loved the support MC Kat got from hers in Diary of a Confused Feminist, especially as they realised how badly she was struggling with her mental health. (On a side note, I was so grateful for the clear, positive portrayal of therapy in this book, a brilliant depiction which shows teens that there are ways to deal with issues such as anxiety.) Then there’s the fabulous group of sisters who replace the Bennets in Ibi Zoboi’s wonderfully engaging Pride and Prejudice remix, Pride (Harper Collins), and Max Kowalski and the sisters he’s trying so hard to protect in Susie Day’s gorgeous MG Max Kowalski Didn’t Mean It (Penguin), which sees their father get into some trouble and disappear and Max decamp the entire family to Wales in a desperate attempt to sort out their money worries by stealing from a dragon’s hoard. Two more relationships between sisters which I loved are those in SLAY and in Sharna Jackson’s High Rise Mystery (Knights Of), as detectives Nik and Norva – ‘NSquared’ – investigate a mysterious death at the block of flats they live in. Oh, and I couldn’t talk about family without mentioning Agent Zaiba – definitely a character who I’m excited to read more about – and her Aunt Fouzia, a detective who’s a role model for her in Agent Zaiba Investigates: The Missing Diamonds (Stripes), first in a brand new series for MG readers. Annabelle Sami brings her characters – including some interesting suspects – to life wonderfully and Daniela Sosa provides truly gorgeous art; an outstanding pairing of author and illustrator.

Then there’s found family, always a favourite theme for me. As Max and his sisters run away to Wales, they’re greeted by a wonderful pair of gay parents and their adoptive son, who fall for the claim that their father is ill in bed and help the children take care of themselves. In Geekerella (Quirk Books) by Ashley Poston, meanwhile – a fabulous love letter to fandoms – main character Elle doesn’t get on well with her stepmother and stepsisters (what Cinderella-based character would?!) but quickly finds a fairy godmother-type named Sage, a colleague at work who she starts to grow close to, and is supported by Sage’s mother as well. I loved Break The Fall partly because of the way in which gymnasts who are rivals – and who never forget this, all being desperate to win gold – nevertheless come together to support each other, both within and across teams.And then there’s the community which builds up as the families of the victims of the Magpie Man start to support each other in Vincent Ralph’s super-tense thriller Are You Watching? (Penguin)

Are You Watching? kept me glued to its pages for the entire time I was reading it; Ralph’s short chapters and tremendous pacing make it a brilliant read building to a superb climax – one of many in the month. Diary of a Confused Feminist, as well as the aforementioned excellent mental health rep, is an entertaining read with lots of laughs and the climactic scene is absolutely hilarious. Other endings I really loved included a massively tense face-off in SLAY, the wonderfully-described competition sequences in Break The Fall and the main character’s take on one of my favourite tropes in the first Agent Zaiba book. Then there's Anna and her friends teaming up to fight back against the slut-shaming which runs through society in The Burning (Simon & Schuster) – Laura Bates’s powerful YA debut, about a girl moving to Scotland to try and escape a dark incident from her past, which somehow follows her there, and the parallel historical story of a girl accused of being a witch – and Maya finally deciding which guy to go for in My Type on Paper (Scholastic), Chloe Seager’s latest hilarious contemporary read, which sees three very different guys appear as if by magic just after she's answered a magazine questionnaire about what she wants in a boy. Oh, and how could I not mention A Throne of Swans? (Hot Key) Katharine and Elizabeth Corr pull off a stunning ending to their fantasy, set in a world where the nobility can change shape into giant birds, which manages to provide a satisfying conclusion to the novel while doing a terrific job of setting up the other book in the duology - but do we really have to wait a year for it?!

Going back to Maya’s decision, I loved that she not only had more than one love interest in MTOP, but also that they were aware of each other and there was a recognition that it’s perfectly fine to be considering your options when you’ve just met someone. Lots of other great romances as well for me last month – for adult reads, I’ve already mentioned The Truth of Things (m/f) and The Lady’s Guide To Celestial Mechanics (f/f) as being brilliant books; both of them had superb couples I really got behind, as did Farrah Rochon’s Huddle With Me Tonight (Wandering Road Press), about an NFL player turned restaurant owner and cookbook writer, and a book reviewer who slams his first release. The pair start by butting heads but quickly find themselves falling for each other and I thought it was a great portrayal of a couple realising they’d misjudged each other fairly early on in the book. Speaking about a couple initially at odds who then find themselves having very different feelings for each other, The Governess Affair by Courtney Milan, with Serena Barton demanding compensation from the duke who got her sacked but having to deal with his right-hand man, Hugo Marshall - nicknamed The Wolf of Clermont - was a stunning read which has me definitely wanting to read more from her. (thankfully, there are a LOT of other books available from her; she's a massively prolific author!) My reread of Snowspelled, and first read of sequel Thornbound, convinced me that Cassandra and her love interest Wrexham, are one of my favourite pairings ever – two people who would clearly die for each other, but are stubborn enough that sparks fly when they disagree on the best way to do something. (And while I wasn’t planning on mentioning February reads in this post, the central f/f couple in Moontangled, third in the Harwood Chronicles, is another wonderful one.)

Back to YA, and there’s no question that Sana and Rachel – who’ve been at odds for years at school, ever since Rachel took Sana’s attempt at asking her out to be a mean joke rather than realising it was sincere, but get thrown together by a teacher setting them an assignment – were my absolute favourite couple. Another f/f couple, the very different princesses thrown together in an arranged marriage after Adale’s brother, who Esofi was originally expected to marry, passed away suddenly and tragically, made The Queen of Ieflaria (NineStar Press) by Effie Calvin a delightful fantasy read and I’m excited to continue with the series. In addition, I loved that the world-building here made the vast majority of people pan – always great to see a fantasy world which isn’t heteronormative! A third YA couple who I really enjoyed were Jewish boy Jamie and Muslim girl Maya in Becky Albertalli and Aisha Saeed's Yes No Maybe So (Simon and Schuster), a fantastic contemporary which saw the pair of them canvas for a local politician while falling for each other. The slow-burn romance here is super-cute and it's an outstanding read - and a very timely one given there's a US election this year. Another couple who meet through politics - this time in an NA book are trans intern Kieran and grouchy Seth in Coffee Boy (NineStar Press), by Austin Chant. This is a wonderful read; I love the chemistry between the pair as Kieran realises that Seth has a crush on his painfully straight boss, but in turn starts to crush on him. And back to YA, the anthology All Out: The No-Longer-Secret Stories of Queer Teens Throughout The Ages (HQ Young Adult), edited by Saundra Mitchell,has so many fabulous pairings! Dahlia Adler's two girls mourning the death of Kurt Cobain, Shaun David Hutchinson's pair of gay magician's assistants, and Anna-Marie McLemore's bruja heroine and trans lover are perhaps my three favourite couples but there are so many amazing ones; it was also a great way to find new authors with pretty much every story being very good, and many being incredible.

What were your favourites last month? Did you find any themes which kept recurring?
- February 05, 2020