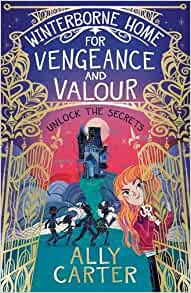 April accidentally sets fire to a museum and ends up living at the Winterborne house with fellow orphans Colin, Sadie, Tim, and Violet. They’re cared for by Ms Nelson and butler Smithers, who are still mourning the loss of Gabriel Winterborne, missing for nearly 10 years and about to be declared legally dead by his uncle Evert.
So when April finds Gabriel hiding out in the house, it’s something of a surprise, to say the least.
This drew me in from the opening few chapters, which pretty much explode onto the page. We have fake claimants to be Gabriel, a mysterious key that April was left by her mother which has a crest matching the Winterborne crest, and then the fire leading to a mysterious figure saving her. A really fabulous way to start a book!
April is one of my favourite MG heroines ever; in some way’s she’s similar to Cammie from author Ally Carter’s outstanding Gallagher Girls YA series – she’s smart, resourceful, brave and determined. However, in other ways she’s a very different character – brash, bold, and reckless. Teaming her up with Gabriel Winterborne (who is in many ways Batman, rich as heck and with a burning thirst for revenge) is a perfect match (although Gabriel himself probably wouldn’t agree with this!) and the supporting cast are fabulous, particularly inventor Sadie who creates hilarious contraptions which don’t always (or even often) work as planned.
The book is jam-packed with great action sequences, zipping along at a breath-taking pace, but there’s also lots of wonderful quieter moments between characters, and I really loved the way so many strong relationships were developed, especially between Gabriel and the orphans. It builds to a phenomenally exciting heist as a climax, brilliantly tense and full of great moments.
Ally Carter’s writing style feels perfect for MG. Obviously, I’m glad she started out writing YA as if she hadn’t we’d have potentially missed out on some incredible books, including the Gallagher Girls series which is one of my favourites of the last decade. But she makes the switch here superbly and I really hope that she’s going to be writing a ton more for this age range – preferably in this series, because it feels like there’s a huge amount of great opportunities set up by the ending to this book!
Absolutely massive recommendation for fans of fun, exciting action.
- February 20, 2020