(Thanks to Stripes for NetGalley approval to read this one!) 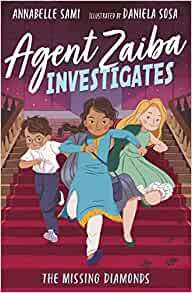 Agent Zaiba is about aspiring sleuth Zaiba, who admires her Aunty Fouzia, a professional detective, and wants to follow in her footsteps. When a celebrity's dog goes missing, followed by some diamonds disappearing, at her cousin's pre-wedding party in an exclusive hotel, she has the chance to save the day, along with her best friend Poppy and brother Ali.

There are SO MANY great MG mystery series out there (Murder Most Unladylike by Robin Stevens is my absolute favourite, Katherine Woodfine's books are glorious, and there's dozens more) that it can feel hard for a new one to stand out, but the writer/illustrator team of Annabelle Sami and Daniela Sosa definitely make this one do so. Sosa's full-page illustrations certainly have a real impact here - she's a stunning talented artist who I'm eager to see more from. And she makes a perfect pairing with a fabulous debut author who's created an excellent central character in the brave, resourceful, and determined Zaiba.

It's great to see such strong representation of British-Asian characters here; I loved Zaiba's family - in particular her detective aunt, who's wonderfully supportive of her! Add in a beautifully-described Mehndi party - a setting which I've never seen before - a host of interesting supporting characters as suspects, and a clever plot which kept me guessing at the eventual solution, and this ranks up there with High Rise Mystery by Sharna Jackson as one of the top MG series starters of recent years. I especially loved the climactic scene, which is a standard going back to the Golden Age of detective stories, and is brilliantly handled here.

Massively recommended, and I'm really excited for The Poison Plot, second in the series, coming this summmer!