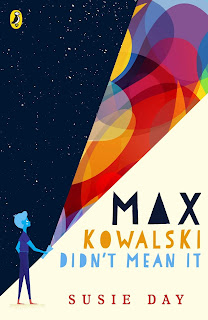 Max Kowalski Didn't Mean It sees a good-hearted but clumsy title character, used to messing things up, have to 'step up' to look after his sisters after his dad disappears. Desperate to hold his family together, and thinking that money will be the only thing which can do so, Max takes the girls to Wales after hearing a legend about a dragon guarding a hoard of gold. Can he find the treasure and take care of the rest of his family?

I grabbed this when I saw it in the library; I'm a huge Susie Day fan - her Pea's Book series is one of my all-time favourites and I love the YA she's written. (Apart from The Twice-Lived Summer Of Bluebell Jones, which is superbly written but which I haven't forgiven for making me cry just before a full day of teaching thanks to a REALLY unexpected ending.)

With any Susie Day book, you're guaranteed a warm, funny, and deeply moving story, and this is definitely no exception. Max is a great central character - struggling ever since the tragic death of his mother in a car accident, which has clearly knocked the entire family for six. "A good, kind, bright young man," as he's described by his teacher early on, but one who's impulsive and can find things overwhelming. There's a really rich supporting cast - Max's sisters are great, while I smiled every time Max's sweet friend Elis Evans appeared on the page. Once they get to Wales, we also get to meet a lovely foster family with two very different dads. The relationships Susie writes are always beautifully portrayed, and the family ones shine through here, both Max's grieving family and Tal and his two foster fathers clearly really love each other, but that definitely doesn't mean they always know the right thing to do where the rest of the family is concerned.

This is a book with very strong themes (another thing you can say about all of Susie's work); it looks at mental health, gender stereotyping, grief, relying on other people, but also accepting that adults aren't always right. It does it all with a touch that I was about to describe as 'surprisingly light', but that's only true for people who've never read Susie's books before - for any who have, there's no surprise at all in the way she weaves all of these into a wonderful story.

What I was quite surprised by, actually, is just how tense it was - it's clear fairly early on that Nice Jackie, Max's dad's boss, is perhaps not exactly what her name suggests, while there's a heartbreaking scene when a pet dies later in the book.

Eventually, though, things build to a realistic climax which deals with some of the problems and gets Max's life on track to improve - while never pretending that it will be easy or that there aren't issues ahead. It's a warm and hopeful read which I'd absolutely recommend to anyone who loves reading wonderful children's novels with bags of heart.
- January 18, 2020