Guest Post: Simon James Green on why he loves laughter and funny YA

A day later than planned because of technical issues (huge apologies to Simon and Scholastic!) I'm thrilled to have Noah Can't Even author Simon James Green talking about funny YA! 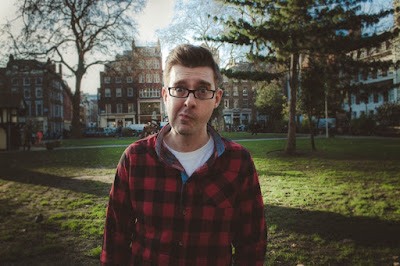 Why I love laughter and funny YA


I must have been about thirteen. I wasn’t particularly bullied at school, but like my protagonist, Noah, I was a long way from being one of the popular kids. It’s very unfair. At that age, some kids are somehow built like proverbial brick, er… lavatory accommodation, securing their popularity by virtue of the fact they could snap your neck just by looking at you. Others, even though they’re going through the hell that is puberty, somehow manage to be good looking, totally avoiding the spots, gangly limbs and terrible hair – and everyone loves them. I needed an angle. I needed something that would make people like me. Just a little bit.


I found it in making people laugh. I distinctly remember the drama lesson where it happened – a funny improvisation involving my portrayal of a rather camp vicar, and afterwards, basking in the warm glow of everyone coming up to me, telling me how funny it was, and slapping me on the back like I was somehow cool. While it may have started as more of a defense mechanism, I soon found that I enjoyed making people laugh not because it meant there was less chance of getting battered, but because it felt good to make people happy. Entertaining people is fun. It’s a privilege being able to create material that people want to turn to when they want to relax, kick back, and have a good time. Laughter takes us away from whatever else is happening in our lives, and the World in general. It’s escapism. It’s the best medicine. That’s one of the big reasons I love writing funny stuff.


So when I was writing my debut YA novel, writing something funny was my natural angle. I also found that writing comedy, and then twisting something more heartfelt and raw in there, can be really effective – funny and sad by turns, just like life is. But I was conscious of something else too: there were some great funny YA books out there, but it didn’t feel like there was exactly a glut of funny LGBTQ+ YA. Now, don’t get me wrong – there are certainly some, and some excellent ones at that. But I felt there should be more. I really didn’t want to write a sad story about a boy discovering his sexuality. I wanted to show that coming out can be a joyful thing; that there can be lots of positives and lots of laughs and lots of fun. And that’s not to diminish the very real struggles that a lot of gay teens face – Noah certainly encounters his fair share of prejudice, heartache and turmoil along the way – but the ultimate message and ending, it’s uplifting. I felt that was important. Life can be good. You deserve happiness.


Whilst that was my starting point, I soon found that actually, I wanted this to be the message I sent to everyone, not just gay teens. My god, the world can be a grim place – who wouldn’t want to seek refuge in the pages of a good book right now? With everything that was going on, I really felt that what people needed was to laugh, have a good time, a giggle. I hope Noah Can’t Even let’s some of us do just that.


Noah Can’t Even is out now – published by Scholastic UK.

Simon James Green grew up in a small town in Lincolnshire that definitely wasn’t the inspiration for Little Fobbing – so no-one from there can be mad with him, OK? He enjoyed a classic British education of assorted humiliations and barbaric PE lessons before reading Law at Queens’ College, Cambridge, where he further embarrassed himself by accidentally joining the rowing team despite having no upper body strength and not being able swim. When it turned out that being a lawyer was nothing like how it looks in Suits or The Good Wife, and buoyed by the success of his late night comedy show that involved an inflatable sheep, he travelled to London to pursue a glamorous career in show business. Within weeks he was working in a call centre, had been mugged, and had racked up thousands of pounds worth of debt. Finding strength and inspiration in the lyrics of Tubthumping by Chumbawumba, he eventually ended up working on a range of West End shows and UK tours, co-wrote a feature-length rom-com for the BBC and directed Hollyoaks for C4 / Lime Pictures. After trying really, really hard, he also managed to write Noah Can’t Even. If you are interested in stalking him, he still lives in London, where he spends a lot of time telling people that Noah Can’t Even is only partly autobiographical, and his mum has definitely never done a Beyoncé tribute act.