The Fallen Children by David Owen is really high on my TBR pile, and I loved last week's awesome launch!

It's always great to hear from David so I was thrilled to get this fantastic piece to share with you all. 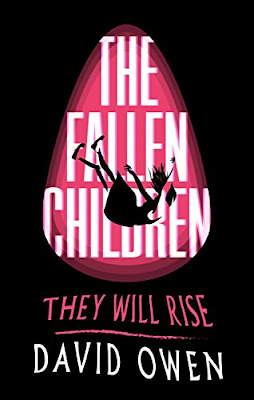 The Fallen Children was the first book I ever had to put in the metaphorical drawer for a year after writing progress had ground to a halt.

I had the core concept – John Wyndham’s The Midwich Cuckoos transported to a modern day council block – but the approach I had taken to writing it simply wasn’t working.

This was because I had set out to write the book as something studiously ‘commercial’, which in my mind meant action-focused, heavy on shock and excitement and light on exploration of social or political issues. Around this time I was reading Michael Grant’s Gone series which, though hardly apolitical, certainly doubles-down on excitement and gratuity, sometimes at the expense of reflection.

I thought The Fallen Children could follow suit. I’d developed a misguided notion of what makes commercial fiction, and this meant dumbing my idea down. The earliest outlines had evil alien children running amok, contrived twists and shoehorned explosions, while doggedly ignoring the thematic questions and connotations inherent in the concept.

Partly I wanted to write something more ‘fun’ after my debut Panther, a deeply personal book I was still finishing up at the time. And partly I had convinced myself that I needed to write this way to have a book people would actually want to buy.

When I returned to the manuscript, I realised that it was impossible – and irresponsible – to write about young women being impregnated by unseen powers without engaging with the emotional trauma this violation would cause. It couldn’t simply be a device to deliver evil aliens into the story.

Almost immediately, characters emerged that felt real and compelling, and the story soon evolved into something much more interesting, because everything I had tried to ignore was the story. The book became interesting once it had something to say.

That’s how The Fallen Children became a story not just about (possibly) alien children with superpowers, but about how young people are being let down by society, how a generation facing immense hardships outside of their control are nevertheless blamed and vilified for their perceived failings, and how they will have to fight to make a better future for themselves. There’s still plenty of excitement in The Fallen Children, but it serves a purpose beyond cheap thrills.

This is something YA fiction does so well, and why many people fail to see YA’s value. Outside commentators see YA’s penchant for breathless, dramatic, often fantastical stories and dismiss it as vacuous, when in fact the best YA is using these to tackle head-on the most urgent issues facing young people.

To pluck some random examples: Only Ever Yours by Louise O’Neill and The Big Lie by Julie Mayhew are rich, provocative dystopian stories about feminist issues and more. Malorie Blackman’s Noughts & Crosses series has all the drama and romance we associate with YA, while also offering nuanced examination of race relations. The Call by Peadar O Guilin is relentlessly exciting (and terrifying) while also being about disability. Grasshopper Jungle by Andrew Smith is as much about sexuality and identity as it is about a giant grasshopper apocalypse.

A young adult readership demands excitement, of course, whether it comes from edge-of-the-seat action, intense romance, or outrageous humour. But it should be a vehicle for exploration and reflection, never an excuse to simplify ideas for a young audience – to talk down to them. The best YA fiction trusts that its reader is ready to engage with difficult topics, because they’re already living them. By acknowledging this, by trying to help young people better understand the most serious issues facing them and the world, we hope to empower them – like the characters in The Fallen Children – to fight for a better future.

The Fallen Children is published by Atom and is available now in all good bookshops.
- May 17, 2017