I used to do a LOT of interviews on this blog at one point, talking to tons of amazing authors. A couple of years ago I hit the stage where I felt I was running out of questions to ask, and took something of a break. I did 2 last year for books I especially loved, though, and after reading another one I adored, Eleanor Wood's Becoming Betty, I was desperate to find out more about her and her awesome book!

If you want to see my mini review, it's at the bottom of this piece along with the blurb for the book - but first, check out the interview itself!

I love standalone books taking place in shared settings, so it was great to see Tuesday appear in Becoming Betty! Are you planning on Tuesday, Lizzie, or any of your other characters appearing in your next book?

I am also a massive fan of crossovers between standalone books. It’s something that Sarra Manning does beautifully and I always wanted to copy! It’s my aim to keep the link going in every future book. It’s nice to give a little nod and feel like we’re all in a gang together.

One of the key themes of the book is Lizzie reinventing herself in order to fit in with what Viv wants. What's the most you've ever changed about yourself for another person? And did you regret it?

I actually had a friend very much like Viv, so that relationship comes directly from personal experience. It started off harmlessly: offering to dye my hair like hers or lend me clothes, but turned into trying to get me to dump my (very nice) boyfriend for someone ‘cooler’ and all sorts of controlling behaviour. Of course, I was eventually replaced with a new BFF who was turned into another clone. This girl was so dazzling – for a while it was like a full-on romance. We would swap dresses halfway through a night out, wear matching make-up, make each other mix tapes and call each other secret nicknames.

When you are not that confident in your own identity, it can be really easy to fall into copying someone you admire. I do regret it, as it ultimately doesn’t make for a real friendship – it should be about what you both bring to the table. Also, of course, I see photos of myself from those months and cringe at the fact I look like someone else!

Music plays a key part in both of your first two books, of course! What's the most fun you've ever had watching music live?

I recently went to see The Raincoats, playing in a tiny community hall near where I live in Brighton. It was truly one of the most amazing nights I have ever had. It was genuinely life-changing. The Raincoats were a 70s all-girl punk band, who are still together and playing live in their 60s – they are still angry and shouty and brilliant. They are not like a normal band and I danced and laughed and cried throughout. It was raw and joyous and emotional. I highly recommend looking up their ‘Feminist Song’ on YouTube. The Raincoats were (among others) a big influence on Dirty Harriet in the book.

Of the bands competing in Becoming Betty, which would you most like to be a part of? And which one would you least like to play/sing with?

I love Dirty Harriet so much. Those girls bring me such joy – I basically wrote them as my dream girl gang. I would LOVE to be in their band. I also have quite a soft spot for Dream Genies, who look like they have a lot of fun.

Living in Brighton and having a lot of friends in bands, I’ve come across a lot of bands like Gypsy Death Curse – music snobs who take themselves *extremely* seriously. I can’t think of anything worse than being in a band like that!

Another key theme is friendship; I love the way the book looks at Lizzie's relationships with friends both old and new. Who are your favourite pair or group of fictional friends?

I love the friendship dynamic in Beautiful Broken Things by Sara Barnard, which feels so true to life (I think that book has basically become the gold standard for writing about friendship in YA!). Also Kaz and Ruby in Remix by Non Pratt, and Kate and Mark in You Know Me Well.

It was really interesting to see Lizzie's experiences at college compared to her friends' at sixth form. Do you think it's important to show teens a range of options that are available after leaving school?

Definitely. It was based a bit on one of my best friends, who left our school to go off to college – we all thought she was so cool and I was very envious, while I was still stuck at school and feeling like a child by comparison. She ended up not coping very well and coming back to our school sixth form. It’s a funny time as people go off to do very different things, which really affects relationships – you can suddenly feel like you’re at a completely different stage in life to your friends of the same age; it’s weird.

If you were asked to put together a band of YA authors to support a group or artist on tour which authors would you pick? And who would you be playing support for?

I love this! I would definitely want to put together a YA supergroup of amazing female authors, so I choose Mel Salisbury, Tanya Byrne, Non Pratt and Holly Bourne. We will play disco-punk anthems and support my hero Patti Smith.

Finally I really appreciated the part that Lizzie's parents and sister played in the novel. Other than your own, who are some of your favourite families in YA?

I’m so glad you thought that, because I am extremely fond of Lizzie’s family (I think Grace might be my favourite character in the book). I know it’s different for everyone at that age, but my family always played a really important role in my life and it feels very natural to make family a big part of the story.

I love the family themes of Harriet Reuter Hapgood’s Square Root of Summer, Nina Lacour’s We Are Okay and Jess Vallance’s The Yellow Room. I ADORE the dad in Rainbow Rowell’s Fangirl beyond all measure.

I always seem to bring up this book, but OF COURSE I have to mention the Mortmain family in I Capture the Castle – the best fictional family of all time!

Thank you so much for taking the time to talk to me, Eleanor! 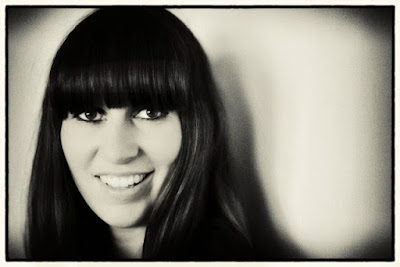 Eleanor Wood lives in Brighton, where she can mostly be found hanging around in cafes and record shops, running on the beach, pretending to be French and/or that it's the 1960s and writing deep into the night. She used to make a photocopied fanzine, moved on to embarrassingly personal blogging and has written for magazines like Elle, Time Out and The Face. She has a fringe, is fond of eyeliner and wishes she had a dog. 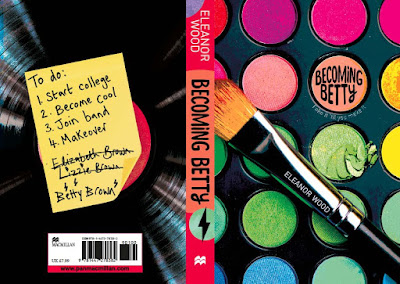 Lizzie Brown's life is one big to-do list:
1. Start college
2. Become cool
3. Decide wtf to do with her life
So when she meets Viv, the crazy, beautiful lead singer in a band, she thinks she's on her way to achieving number two on her list. And when Viv asks her to be the bass player in the band, there's only one problem - Lizzie can't play a single note. And that she's nowhere near cool enough (ok, two problems). And that she has a huge crush on the guitarist (ok, three), who happens to be Viv's boyfriend (ok, this is a terrible idea).

But Viv won't take no for an answer, and decides that a makeover is the answer to everything. Boring Lizzie Brown is going to become Betty Brown the Bass Player and there's nothing Lizzie can do about it . . .
Told with Eleanor Wood's trademark warmth and hilarity, Becoming Betty is the story of one girl's journey to being cool, and learning what's on the other side.