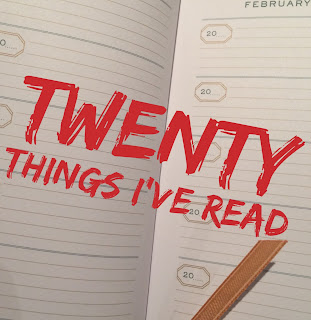 As mentioned in week 1, there are some sites which could quite conceivably fill this list between them EVERY WEEK as they constantly produce amazing posts - and I find it way too hard to single them out! So instead, I will just list them at the start of each post. If you're not reading the following, you are REALLY missing out.


Addition: Given the current political climate, I would strongly suggest also reading EVERYTHING Celeste Pewter tweets; she is incredibly insightful and her tweets on US politics have helped me figure out which things going on are reasonably worrying and which are absolutely terrifying.


n case you missed it first time around, this Nikesh Shukla piece on the need for greater diversity in books is superb. Córdova's Bustle list of overrated books and what to read instead, and Casey's Autostraddle post, 8 queer sci-fi books to read right now.

debut authors of color and Native Americans, Lucy Nisbet for YA Interrobang on 8 YA books to watch out for this February. (I’m so excited for American Street, while The Hate U Give is INCREDIBLE!) Isabel Calkin’s NYLON piece, on 10 black women in academia that you need to know about, is wonderful. I loved Myles E Johnson’s piece on Beyoncé for the NYT. while Remi Joseph Salisbury, on Stormzy being suspected of breaking into his own house, is excellent.


this The Book Voyagers post on racial diversity on book covers is brilliant, as are Houghton Mifflin Harcourt's Black History Month recommendations. Two great interviews, one with wonderful crime author Nick Bryan over at Whispering Stories and another with Nina LaCour at Booklist Reader; I can't wait for We Are Okay! Jacqueline Carey for Tor on the breathtaking wonderfulness of Elizabeth Wein’s Code Name Verity is amazing!

There's a great piece here by Keah Brown on resistance, black joy,disability and work to do. Hannah Gersen’s piece for The Millions about women seen andheard in Hollywood is awesome – I loved Hidden Figures! And an excellent piece by Mark Rice-Oxley on the dark worldview ofthe Daily Mail. I loved Grace’s post on romantic moments in her life. As fun as that post was, I have to be honest and say I struggled with Valentine's Day in general. This was NOT helped by an abysmal Tor article talking about how romance makes characters in SFF relatable. I was so glad to see a brilliant Twitter thread from Sarah Strange, who explained the issues with the post far more clearly than I could.

Nikesh Shukla is running a masterclass on Writing Motivation at Waterstones Piccadilly on 25th February from 1pm – 4pm. There are four places available as gifts to BAME writers – one bought by Nikesh himself, and three donated – who couldn’t otherwise afford to take part. Deadline is 5pm Monday 20th February to apply for one of these four places; details in Nikesh’s tweet here.

The Branford Boase Award longlist looks great; if any schools are looking to shadow a prize then this would seem like a brilliant one to pick.

This open call for submissions from Muslim writers, coming from a lot of incredible agents is fabulous! Also open for submissions, Black speculative fiction magazine Fiyah, and Haus of Liberated Reading, who are putting together an anthology of Black writing from across the globe.
- February 17, 2017