Lots of kind publishers sent me books - special mention to Scholastic, who hosted their annual bloggers' brunch! I came away from this with a signed copy of Lisa Thompson's Goldfish Boy, which I won in a prize draw at the start of the morning, and the intriguing-looking Show Stopper which was included in our goodie bags. In between, we had the chance to pick up recent Scholastic books we'd missed so I grabbed To All The Boys I've Loved Before and PS I Still Love You by Jenny Han; I've heard great things about this series and want to catch up before the release of Always and Forever Lara Jean.

I'm not going to talk about every book I was sent by publishers because there were simply so many - thank you all so much - but there's a full list, with Goodreads links, below.

One which I jumped on pretty much as soon as I received it was Phil Earle's Mind The Gap, his debut for Barrington Stoke. Over the past few years Phil has shown himself to be one of the most consistently superb YA/MG writers around, and this is no exception - check back later this week, or see my pinned Twitter thread, for a full review of everything I've read this month, including this. 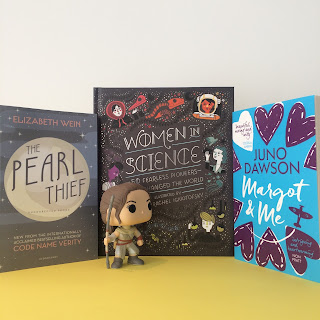 Elizabeth Wein's Code Name Verity is one of my favourite ever YA books, so her prequel The Pearl Thief is one that I'm incredibly excited for; I can't wait to read more about a phenomenal character. I am also a huge fan of Lisa Williamson's debut The Art of Being Normal and have been waiting impatiently for more from her for ages, so getting All About Mia is great! Juno Dawson's Margot & Me is another that intrigues me and I'm very much looking forward to it. 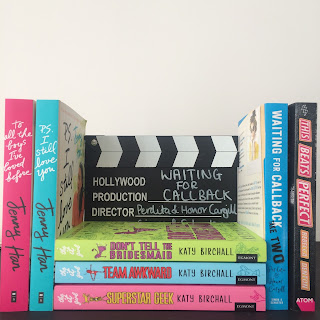 I appear to be flooded with fun contemporary reads which is a VERY nice problem to have; it's my favourite genre! In addition to the Jenny Han books mentioned above, Simon & Schuster sent me Waiting For Callback: Take Two, which I read almost immediately and definitely lived up to my high expectations! Atom sent This Beats Perfect; I am intrigued by this one partly because the recent influx of #boybandlit has been of such a high overall quality - I think I've really enjoyed nearly all of them - and partly because it got an incredibly strong recommendation from Lucy at Queen of Contemporary, who has exceptional taste. Egmont also sent me The It Girl trilogy; great to see the new covers together! I really enjoyed the first couple and am looking forward to reading Don't Tell The Bridesmaid soon. 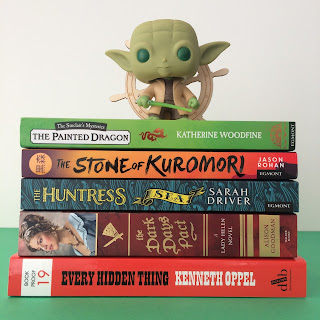 I'm excited for more in series I'm enjoying, with Egmont sending me The Mystery Of The Painted Dragon and Stone of Kuromori, 2 really fun MG series, and Orchard sending Take The Key And Lock Her Up - I'm a huge Ally Carter fan and loved book 1 of Embassy Row; I need to catch up soon! 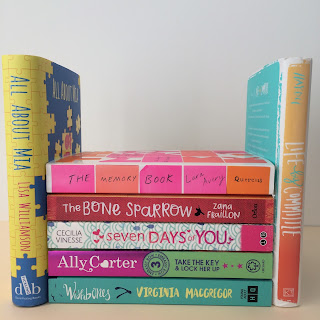 Speaking of series, I got sent two series starters which look really interesting, Sea from Egmont and Who Let The Gods Out? from Chicken House. Intrigued by both of these!

As a huge fan of road trip novels I'm exceptionally excited for See You In The Cosmos which sounds utterly amazing -  it's an MG debut about a boy trying to make audio recordings on his iPod then launch it into space to show other lifeforms what life on Earth is like. This is getting huge praise, and lots of comparisons to Wonder and Curious Incident. 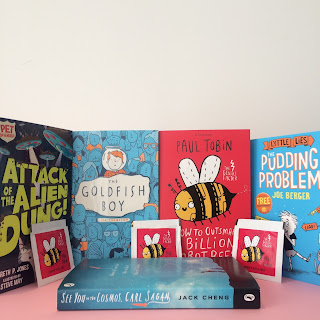 And I got sent Women In Science: 50 Fearless Pioneers Who Changed The World by Wren & Rook. I hadn't heard of this one but I'm so glad they sent it me because it is BEAUTIFUL! I will be reading it properly soon but even a quick flick through shows how wonderfully written and illustrated and how well laid-out it is; it's the best-looking book I've received for some time.

Finally, I was approved to read several books I'm hugely excited about on Netgalley! Two of my favourite reads of the past 18 months or so have been Emily Skrutskie's The Abyss Surrounds Us, which has incredible world-building and amazing romantic tension between the two leads, and Riley Redgate's Seven Ways We Lie, which juggles 7 POVs brilliantly and has wonderful pan AND ace rep! (The ace/aro character isn't called this on page, but Riley has confirmed they are, and it fits their character NOT to know the words.) Flux and Abrams, respectively, approved me for these two authors' next books and I'm incredibly excited to read them. The Edge Of The Abyss is the sequel to TASU and I can't wait to catch up with these outstanding characters and see what happens to them. (Side note; the first book in the series is one of the only YA novels I've seen to address the power imbalance which inevitably makes a captor/prisoner relationship hugely problematic, rather than romanticising it - this was so great to see!) Riley Redgate's Noteworthy is a stand-alone about a girl infiltrating a boys' school to sing a capella and sounds tremendous fun; friends who've read it really love it!

Stripes approved me for Following Ophelia by Sophia Bennett, a historical romance about a girl trying to reinvent herself as a Pre-Raphaelite muse. I mentioned earlier that Phil Earle was one of the most brilliantly consistent authors I know of; Sophia is definitely another who deserves that praise! I really enjoyed adventure story The Castle and last year's #boybandlit book Love Song, while You Don't Know Me is one of my very favourite contemporary YA novels of the last decade. I'm hugely excited to read this new one. Stripes also approved me for Poppy's Place book 3, The Great Cat Cafe Rescue. Katrina Charman's a really fun writer and she's perfectly paired for this series with Lucy Truman, my current favourite illustrator, so this is another which should be a lovely read.

The It Girl series by Katy Birchall (Egmont)

Take The Key And Lock Her Up by Ally Carter (Orchard)

See You In The Cosmos by Jack Cheng (Puffin)

Who Let The Gods Out? by Maz Evans (Chicken House)

The Edge of Everything by Jeff Giles (Bloomsbury)

The Dark Days Pact by Alison Goodman (Walker) Given to me by my lovely friend Grace!

Rabbit and Bear: The Pest In The Nest by Julian Gough and Jim Field

To All The Boys I've Loved Before and P.S. I Still Love You by Jenny Han (Scholastic)

Life By Committee by Corey Ann Haydu (Katherine Tegen) Given to me by my wonderful friend Debbie.

The Stone Of Kuromori by Jason Rohan (Egmont)

How to Outsmart a Billion Robot Bees by Paul Tobin (Bloomsbury)

Seven Days of You by Cecilia Vinesse (Hachette)

All About Mia by Lisa Williamson (David Fickling Books)

The Mystery of the Painted Dragon by Katherine Woodfine (Egmont)

Fantastic Beasts and Where To Find Them (the Poster Book) (Scholastic)

The World of the Hunger Games: The Official Colouring Book (Scholastic)

The Edge of the Abyss by Emily Skrutskie (Flux)