Debuting another new feature this week, which is hopefully going to be monthly, depending if I can keep up with it - I thought I'd let people know what books I bought and received, and highlight some of them. At the end, there are links to all of the books on Goodreads!

I bought far more than I was planning on this month, but there were so many great books I couldn't resist! 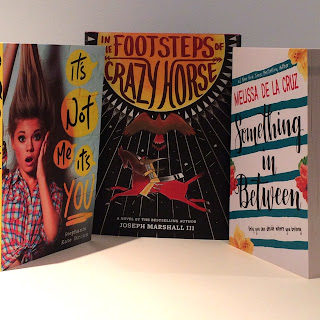 The overwhelming love on my Twitter feed for The Sun Is Also A Star and Bone Gap made them 2 of my first purchases of the year, along with In The Footsteps Of Crazy Horse, highly recommended by Debbie Reese on American Indians in Children's Literature. 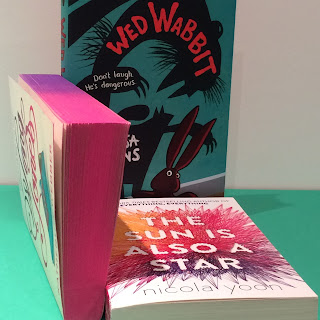 Tereze at Tales On Moon Lane brilliantly hand-sold me Wed Wabbit, which I read on the day I bought it and absolutely adored - check back later in the week for my reviews of everything I've read this month to see details of why I loved it so much. (Or take a look at my Instagram, or my pinned Twitter thread, collecting all my reviews of books read in 2017.)

Sue's review of Something In Between was enough to get me to order it, it's an incredible recommendation from someone with outstanding taste in books. Speaking of people with fabulous taste in reading matter, I made the mistake of rereading Dahlia Adler's year-end survey post just before going to Foyles, which could have proved even more expensive than it did. I was restrained, but couldn't resist Stephanie Kate Strohm's It's Not Me, It's You, her pick for book that put a smile on your face/was most fun to read. (On a side note, this is one of the most gorgeous covers I've seen for ages! Would definitely have drawn me in even if it hadn't been on my radar from Dahlia's post.) 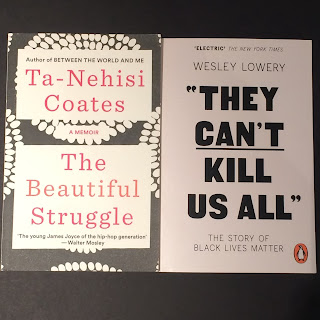 I'm also hoping to read more non-fiction this year; reading Angie Thomas's phenomenal Black Lives Matter-inspired YA novel The Hate U Give made me want to add to my knowledge of the movement and Wesley Lowery's They Can't Kill Us All looks superb, while Ta-Nehisi Coates's piece for The Atlantic last year, My President Was Black is one of the best things I've read for ages so I can't wait to read The Beautiful Struggle, his memoir. 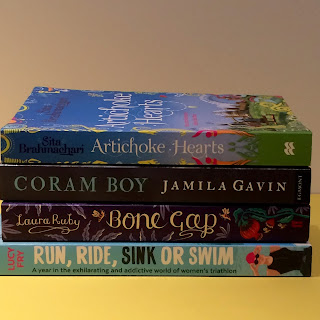 I picked up Run, Ride, Sink or Swim second-hand as Debbie has me yearning to read more sports books at the moment. (I was going to claim I bought it mainly so I could pass it onto her once I've read; I think this is fairly clearly me making excuses though!) I also grabbed Artichoke Hearts from the same shop; I've been meaning to read for ages and Sita Brahmachari's stunning short story in the Stripes anthology I'll Be Home For Christmas reminded me that I need to get around to this one. I already own the ebook but a lot of the time I find it much easier to concentrate reading physical books, so thought it was worth getting a paperback as well. Another one I've been meaning to read for a long time, having had it recommended a lot, is Coram Boy, so I finally succumbed and bought it at Tales a few weeks ago. 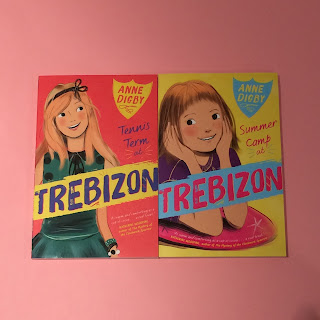 Finally, I bought new copies of three I own. I continued my collection of Trebizon reissues with the 6th and 7th in the series; I have older editions of both but cannot resist Lucy Truman's gorgeous illustrations! And I will always treasure my signed proof of Katherine Webber's fantastic Wing Jones, but the sprayed edges in the final book were too much to resist! (Especially as it's a book so great I want to lend it to EVERYONE and can now do so without letting my signed proof out of my sight!) 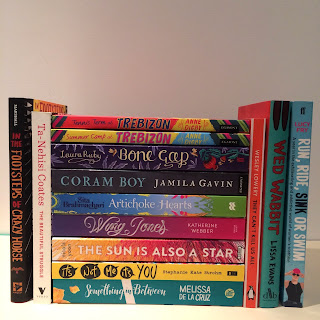 Most of the ebooks I got were cheap impulse buys - the @diversaesthetic Twitter account gets the credit for several of them! - but I was really excited to see Corinne Duyvis's On The Edge Of Gone, which I've heard lots of great things about, reduced to just over £1 on Kindle. This sci-fi about an autistic girl trying to obtain a spot on a ship leaving Earth just before a comet hits, and protect her mother and sister, is hugely praised by people I follow on Twitter. I've not read many own voices novels with autistic characters and Corinne's Twitter feed is hugely informative about autism so I'm looking forward to reading this novel.

The sample chapters of Ishara Deen's God Smites and Other Muslim Problems were enough to convince me I needed to read it in full. (I'm very glad I did, it was wonderful!) I was immediately engrossed in the mystery here and really enjoyed the relationship between Asiya and the rest of her family. It's great to see a Muslim lead in a children's crime book, and I'll definitely be hoping for more from Ishara Deen and her fabulous main character. Again, full review to come in a few days.

The Beautiful Struggle: A Father, Two Sons and an Unlikely Road to Manhood by Ta-Nehisi Coates

The Tennis Term at Trebizon and Summer Camp at Trebizon, both written by Anne Digby and illustrated by Lucy Truman (Egmont)

They Can't Kill Us All: Ferguson, Baltimore, and a New Era in America’s Racial Justice Movement by Wesley Lowery (Penguin)

It's Not Me, It's You by Stephanie Kate Strohm (Scholastic)

The Sun Is Also A Star by Nicola Yoon (Corgi Children's)

Half of a Yellow Sun by Chimamanda Ngozi Adichie (Harper Perennial)

On The Edge Of Gone by Corinne Duyvis (Amulet)

Once Upon A Player by Agay Llanera

Prep and Prejudice by Miren B Flores