I thought I'd recommend some middle grade books/series that I think would be particularly interesting reads for book clubs. 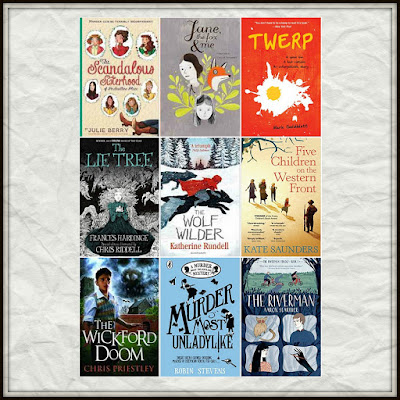 Murder Most Unladylike series by Robin Stevens (Puffin) - Fabulous historical detective novels which have clever plots and wonderful characters. In addition, it's a stunning look at the racism narrator Hazel Wong faces, and the way that her friendship with Detective Society leader Daisy Wells changes as the series progresses.

The Wolf Wilder by Katherine Rundell, illustrated by Gelrev Ongbico (Blloomsbury Children's) - Wonderfully lyrical historical adventure story with gorgeous illustrations. Rundell's prose is near-peerless amongst current writers and lead character Feo - a 'dark and stormy girl' - is one of my favourites for years. Her quest to rescue her mother - aided by other children and the three wolves that she and her mother have been trying to re-introduce to the wild - is a magnificent story.

The Riverman by Aaron Starmer (Square Fish - US import) - 12-year-old Alistair Cleary is deputised by mysterious neighbour Fiona Loomis to write her biography, telling the story of the gateway in her basement to a magical world. But in this world, the mysterious Riverman steals the souls of children. Should Alistair believe her tale? Or is something even worse happening to her? This is confusing at times but breathtaking often, an amazing one to discuss.

The Lie Tree by Frances Hardinge, new version illustrated by Chris Riddell (Macmillan) - MG/YA crossover maybe, but I wanted to include this (especially since there's a new edition out with illustrations from the wonderful Chris Riddell!) The story of Faith's search for the truth behind her father's death, and the strange tree that bears fruit related to lies you spread, is a strange but gripping historical fantasy. It's also brilliantly feminist, with so many wonderful female characters.

The Wickford Doom by Chris Priestley, illustrated by Vladimir Stankovic (Barrington Stoke) - This novella shows Priestley's skill in building up an incredibly creepy atmosphere in a short book, as Harry and his mother, after the war, seemingly fall prey to a cruel prank only to realise there could be something far more evil than a nasty joke to worry about. A perfect post-Halloween read.

The Summer of Telling Tales by Laura Summers (Piccadilly Press) - Ignore the cover that makes it look like it's for very young readers (I've left it out of the collage to make it easier to ignore!) this is a stunning read - switching between fun, scary, and life-affirming as it tells the tale of two girls and their mum who are on the run from their domineering and abusive father. The two girls blossom in new surroundings - but can they ever be free from their dad's shadow?

Twerp by Mark Goldblatt (Random House - US import) - This is a fascinating read, where Julian Twerski writes a journal about something which got him suspended from school. The narrator skirts around the issue for as long as possible - leading it to initially feel more like an interconnected set of short stories than a novel - but things eventually get tied together superbly. Great characters and an awesome New York 1960s setting add to reasons to recommend it, while Julian's voice is fabulous.

Five Children on the Western Front by Kate Saunders (Faber Children's) - A well deserved winner of the 2014 Costa Children's Book Award, Kate Saunders' sequel to E Nesbit's books is an outstanding read which shows just how well a talented author can do in breathing new life into familiar characters. The Psammead and the children here are portrayed brilliantly and it's an incredibly moving read.

The Scandalous Sisterhood of Prickwillow Place by Julie Berry (Piccadilly Press) - Reading like an MG version of an Alan Ayckbourn farce, this Victorian murder mystery - which shows the seven schoolgirls at St Etherelda's School For Young Ladies try to cover up the sad news of the deaths of the headmistress and her brother - is a hilarious read. It's really interesting to look at the way Julie Berry plays with expectations even in her characters names, with Smooth Kitty, Disgraceful Mary-Jane, and so on, being revealed to have more layers than these adjectives may lead us to believe.

Jane, The Fox and Me by Fanny Britt and Isabelle Arsenault (Walker Books) - Beautiful graphic novel which shows the story of a girl who thinks of herself as fat and plain and buries herself in Jane Eyre to avoid bullies. The combination of a muted palette for much of the book, and flashes of colour as Helene reads about Jane Eyre, stands out as being gorgeous, while Britt captures the poignancy of the lead's despair in her sparse, well-chosen words.