The Shadow Magic blog tour, organised by the fabulous Faye Rogers, is wonderful - it's great to be on it today with a fantastic Joshua Khan guest post as part of my irregular Classic Children's feature! 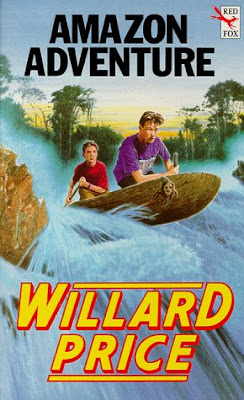 THE ADVENTURE BOOKS by Willard Price

Number of books: About twenty or so. Volcano Adventure. Amazon Adventure. South Sea Adventure. Tiger Adventure. You get the idea.

The Premise: Hal and Roger Hunt are sons of a big game hunter turned conservationist. They travel the world catching wild and rare animals for parks and zoos. They often have to battle poachers, gangsters and rivals, as well as the beasts they’re after and the environment, always harsh, always deadly.

Why I Really Like It: They were awesome adventures! Filled with peril, exotic locations and great banter between Hal (older, wiser) and Roger (the joker). It was my first taste of animal conservation, and probably why I spent my twenties travelling, all in an attempt to follow in Hal and Roger’s footsteps.

Best Books: Probably Cannibal Adventure because it was the only one of their books I owned, so read and reread that plenty of times. I used the library back then an awful lot.

Who It Will Appeal To: Everyone! It’s very mid-grade, and given that it was written in the 1960s will come across quite dated to an adult reader, but nevertheless its heart is in the right place, its intentions are noble, and the read is thrilling.

Others By The Same Author: I think he wrote something else (interjection from Jim - he did, his autobiography My Own Life of Adventure is a fascinating read) but there are plenty of books in just that series to keep you busy. 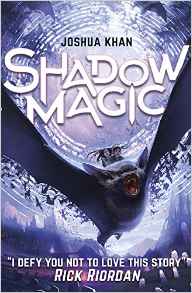 Summary:
Thorn, an outlaw's son, wasn't supposed to be a slave. He's been sold to Tyburn, an executioner, and they're headed to Castle Gloom in Gehenna, the land of undead, where Thorn will probably be fed to a vampire.

Lilith Shadow wasn't supposed to be ruler of Gehenna. But following the murder of her family, young Lily became the last surviving member of House Shadow, a long line of dark sorcerers. Her country is surrounded by enemies and the only way she can save it is by embracing her heritage and practicing the magic of the undead. But how can she when, as a girl, magic is forbidden to her?

Just when it looks like Lily will have to leave her home forever, Thorn arrives at Castle Gloom. A sudden death brings them together, inspires them to break the rules, and leads them to soar to new heights in this fantasy with all the sparkle and luster of a starry night sky. 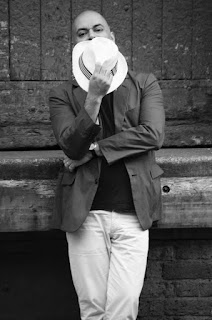 Joshua Khan was born in Britain. From very early on he filled himself with the stories of heroes, kings and queens until there was hardly any room for anything else. He can tell you where King Arthur was born* but not what he himself had for breakfast. So, with a head stuffed with tales of legendary knights, wizards and great and terrible monsters it was inevitable Joshua would want to create some of his own. Hence SHADOW MAGIC. Josh lives in London with his family, but he’d rather live in a castle. It wouldn’t have to be very big, just as long as it had battlements.
*Tintagel, in case you were wondering.


It Takes a Woman


YA Under my Skin


Snuggling on the Sofa