I'm excited to have the brilliant Lisa Williamson taking part in 6 Degrees today! Lisa's debut, The Art of Being Normal, is one of my favourite books of the last few years. 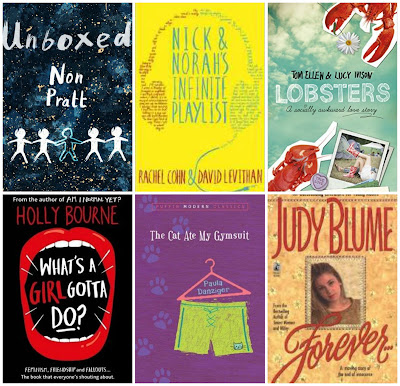 Non Pratt's stunning novella Unboxed takes place over a single day. Another YA novel with a short timeframe is Nick and Norah's Infinite Playlist.

Set over a single evening, it charts the romance of Nick and Norah, brought together by their almost identical taste in music. The novel is co-written by Rachel Cohn and David Levithan, who have gone on to pen a further three excellent books together. One of my very favourite co-writing teams is the hilarious and brilliant Tom Ellen and Lucy Ivison.

Tom and Lucy's debut, Lobsters was widely regarded as one of the funniest books of 2014. The novels exploration of teenage sex is frank, funny, realistic and overwhelmingly positive, instantly reminding me of the representation of sex in Judy Blume's iconic Forever.

The Cat Ate My Gymsuit explores parental relationships, body image and popularity. Its thirteen year-old narrator, Marcy Lewis learns to find her voice when her favourite teacher, Miss Finney is threatened with the loss of her job for her unconventional teaching practices. Marcy leaps to Miss Finney's defence, her protest resulting in a suspension from school and major rifts at home. Another teen making a stand is the wonderful Lottie in Holly Bourne's What's a Girl Gotta Do?

After being heckled on her way to school, Lottie decides enough is enough and launches a feminist revolution, calling out every instance of sexism she sees (with a little help from a rather loud clown horn). The climax of Holly's excellent Spinster Club trilogy, it's a smart, witty and important read for teenage girls and boys everywhere.