Stories from the Edge Blog Tour: A Parent’s Terror, By Bryony Pearce, Member of the Edge

Really delighted to have Bryony Pearce on the blog today talking about her story from the anthology Stories from the Edge, which features some of my favourite YA authors! 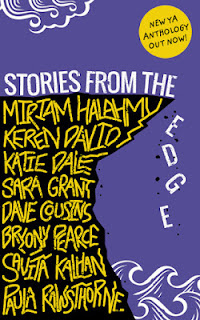 I was sitting in the school hall with my head between my legs, hyperventilating. A small group of teachers surrounded me, a tech savvy parent was hopping from foot to foot in front of me and a police officer was hovering, looking concerned.

“Are you all right?” he asked, worriedly.

“Not really.” I was trying to look less like a drama queen / wuss, but honestly, I kept having flashes of the talk that had just been given to a cadre of concerned parents.

The police officer, realising that my state of distress was in large part his fault, edged awkwardly out of the hall, with a swift backward glance. “If you want to talk about it some more, you can get in touch via the school.” Then he fled.

I pulled myself together and staggered from the hall, my head filled with horrible visions and determined to remove my children permanently from all access to the Internet.

As I was busy deleting Google from my daughter’s iPad I stopped and thought. Perhaps I should speak to her first.

But this talk had scared the life out of me.

When we were kids the worst we had to worry about was the old pervert in the house on the corner who stood watching the school bus go past stark naked and with his curtains open. I once saw a flasher behind a bush and one of my parent’s friends would make unsuitable comments in a creepy manner whenever he’d had a few drinks. ‘Let’s share stories of when we lost our virginity - you first.’ Um no.

These were all things easily dealt with. Easily spotted for what they were.

But now I find out that my daughter is exposed to world far wider than mine, far more dangerous. She doesn’t just have to worry about closing her eyes every time her bus drives past ‘creepy corner’. Somewhere, perhaps on the other side of the country, or even the world, someone, right now, could be planning to try and groom her on the internet, seduce her into taking pictures, doing things she isn’t ready for, or even meeting up. Someone could be looking at a photo that I’ve put up, or that someone else has put up, and thinking ‘that child looks vulnerable.’

I thought I was fairly technically minded. I’ve got a blog and a website – I made my website myself, using html and java script, for heaven’s sake - I use Twitter. Occasionally I use Instagram, if I remember to take pictures and put them up. I thought I was on top of things.

But the policeman told us about chat rooms and picture sharing apps that I’d never even heard of.  Apparently teens don’t like Facebook, their parents keep trying to friend them. It puts them off. They go elsewhere.

The policeman told us about something going on right under our noses, something that happened in the local high schools.

One night, on one of these new sites I hadn’t heard of, a group of local teens were chatting online when another asked to join them. He said the right things. Each thought he was a friend of one of the others. Once he was in their group, he was able to start branching out and joining others. Soon he was in several of the groups, groups with teens in that went to different schools from one another.

A parent of one of these local teens noticed that her daughter had become quiet and withdrawn, secretive, not letting anyone else see her phone screen when she used it. Eventually, when pressed, the daughter broke down, telling her mother that she was being harassed by this teenager online. That things had got out of hand and she didn’t know what to do. The mother looked at the messages her daughter had been receiving and was horrified at the content. She called the police.

The ‘teen’ who had been allowed into the chat rooms, who had access to teenagers across a number of local schools, via social networking, was no teen at all. He was a middle aged man from a few miles away who was busy grooming three of the girls. Only one sharp-eyed mother stopped him.

This wasn’t a script for a film. This wasn’t happening in America (where all things are possible). This was local. To me. Happening at the high school my daughter would soon be attending.

How can I protect her from things like this?

As I so often do with things that terrify me, I started to write a story to exorcise my demons.

I wanted to write a story about Internet Safety with a heroine who, as all my heroines do, kick ass. But as it was a short story it would have to have a twist and I wanted to make sure that my story also conveyed to readers the information that the policeman had given us: make sure your children know not to give out any personal details, don’t post photos, don’t post images with your school uniform on, or local landmarks, nothing that will give away your position in the world. Don’t ‘friend’ people you don’t know in real life. Don’t believe what you see or hear on the Internet. If you think the big bad wolf had an easy time disguising himself as granny, think how easy it is to put up a picture of some random teenager and claim that you’re 16. I could tell you I’m a blonde, blue eyed figure skater, stick up a picture and you’d be none the wiser. Maybe I am, you don’t know.

I hope my story is entertaining, fun and that the twist gets you. I hope though, that it also makes you think. Do I do this? Am I being careful enough? Am I ‘friends’ with someone who has big sharp teeth?