A Midsummer Night's Dream is one of my VERY favourite Shakespeare plays! I was really excited when Hayley Culverhouse offered to post about it as part of my irregular classics series, to tie in with the Russell T Davies adaptation shown on the BBC earlier this week (which you can watch NOW on iPlayer!) 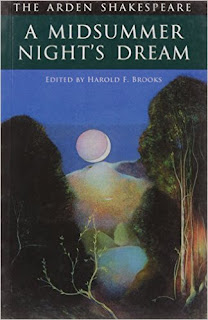 1. The overall theme of love and attraction.

A Midsummer Night’s Dream has a good handful of arcs throughout the play but a common theme throughout them all is the theme of love and attraction. At the start of the play, Hermia has Lysander and Demetrius in love with her (alright for some… pshhh), Helena is in love with Demetrius but it’s unrequited. Titania, queen of the fairies, is attracted to Bottom, even tho he’s an ass. It’s really interesting to see other people’s interpretations as to what makes a person attractive/unattractive, especially in the scenes with Hermia, Helena, Demetrius and Lysander.

2. The language is pretty straight forward.

3. There’s a play within the play.

With Midsummer’s first performed around 1595-1596, Shakespeare had already had his fair share of experiences with actors. I like having a theory that this whole plot line was inspired by that.

There’s a hidden part of the forest where fairies live. Like if you ever see Midsummer’s on stage, there will be people dressed as fairies prancing on the stage. It’s so great! It’s also great to imagine the scene being presented in your head.

It’s a really fun, lighthearted piece of literature with lines that I would call “proper corkers”. Seriously! My personal favourite is from Lysander in Act I Scene I “You have her father's love, Demetrius. Let me have Hermia's. Do you marry him.” Bottom is also a really funny character, too. I guess the hilarity of the piece is also up to interpretation. Luckily, the BBC have just aired a 90 minute TV Movie of A Midsummer Night’s Dream starring Maxine Peake & Elaine Paige and directed by Russell T. Davies!