My #ReadProud #6Degrees continues today, and I'm really thrilled to be able to welcome my friend, awesome blogger George Lester, to the blog! 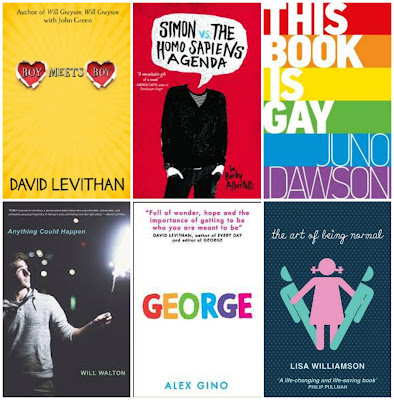 I was asked by wonderful human being Jim to be part of his #6Degrees blog feature for Pride Month and I couldn’t be happier to be able to throw my sparkly gay hat into the ring and share some of my favourite reads with you (and the occasionally tenuous links that tie them all together!)


Boy Meets Boy by David Levithan is a positively gorgeous love story about a boy called Paul and a boy called Noah. They meet. It’s adorable. (Seriously, one of the best meet-cutes in YA) And the sweetest of romances ensues. This is the book that taught me that it is okay to be gay, to be who I am. It taught me that love and happiness is a possibility for me.


Simon Vs The Homo Sapiens Agenda by Becky Albertalli is very much a book I consider to be the love child of time and Boy Meets Boy. While Boy Meets Boy is set in a wonderful, utopian town, it still shows us the outside world being pretty messed up (Tony. Oh TONY!) Simon VS The Homo Sapiens Agenda is set today, in a much more accepting world that must have seemed a long way off when David Levithan first wrote Boy Meets Boy some 13 years ago.  Simon VS wouldn’t have existed back then.


Another book that probably wouldn’t have made it 13 years ago is This Book Is Gay by Juno Dawson. Without a shadow of doubt, This Book Is Gay is one of the most important books ever written. It's bold, it's honest and, above all else, it's got heart. An absolutely stunning handbook of helpful stuff and things for members of the LGBTQIA community! It's the kind of book I really could've done with while I was growing up and has the potential to do so much good!


The Art of Being Normal by Lisa Williamson is another book with the potential to do an awful lot of good in the world. It was my favourite book of 2014 (it came out right at the very end!) and absolutely blew my mind whilst giving me all of the feels ever. It was the first book I had ever read featuring a transgender protagonist and certainly one of the first to hit the mainstream in the way it did.


A book that deals with similar themes, though for a much younger audience, is George by Alex Gino. I found this book to be so sweet and refreshing, both in the way it handled the subject matter and also in the way it approached in for a younger audience. It is clever, bursting with heart, and so well put together, I cannot begin to even. It was edited, funnily enough, by David Levithan for Scholastic (who publish it in the US and the UK) and there was a quote from him on the cover of the UK edition. It also leads me rather nicely onto my final choice.


Anything Could Happen by Will Walton was edited for the PUSH imprint at Scholastic US by; you guessed it, David Levithan. It is a story of unrequited love between Tretch and his best friend, the struggles of coming out/being gay when you don’t feel like you’re in a safe environment, and coming to terms with it all. It’s absolutely beautiful and deals with so much more than I was expecting when I went into it. There are brilliant sub plots about family history, and a fantastic father son relationship that made me sob sob sob.


There you go! Some total faves there that I recommend you go out and take a look at (if you haven’t already). Thank you so much for having me Jim, this was so much fun! Don’t forget to check out the other posts that have appeared for this so far – they are SO FANTASTIC!


Have you done a #6Degrees post this month? Remember to link it up to my post from June 4th!