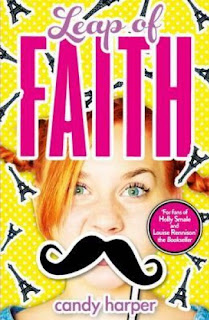 I've actually avoided spoilers for the first two books! My reviews of both can be found at The Bookbag - Have A Little Faith and Keep The Faith.

I love this series a LOT - I've bought something like 17 copies of the first book to pass on to people at various points - and am invested in it to the point where my excitement at getting my hands on a copy was mixed with nervousness - what if it was a let-down? Thankfully, it was clear from very early on that I had nothing to worry about here - I broke my personal "don't mention what I'm reading on Twitter within the first 100 pages in case I give up on it" rule (for the second time in 2 days, the first being for Holly Bourne's How Hard Can Love Be?) to tweet "Perfect book is perfect. Well, I'm only 37 pages in so far, but they are an AMAZING 37 pages!"

The basics of the plot here are that Faith is going on a French exchange, which best friend Megs is strangely reluctant to join her on. Meanwhile there's more boy trouble, while she's also trying to juggle revising for exams and applying to become a prefect (despite perhaps being a less than obvious choice in the minds of certain teachers!)

The plot is never really the main point of a Faith book though - instead it's a welcome way to catch up with one of the best friendship groups in recent YA fiction. The dynamic between Faith and Megs - both quite brash and outspoken, shy Angharad, and Lily, who's in a world of her own, is really wonderful. Throughout the book we get to see how much the four care for each other, but perhaps more importantly we also see them again negotiating issues which arise when people aren't always as thoughtful as they could be. The boys add to this brilliantly - while there's a possibility of romance for Faith here, a lot of the dealings with the guys are about being friends and working out how to act around someone who likes you in a different way from the way you like them (or vice versa.) The addition of the French students, especially Faith's exchange partner Josette, adds some great new characters, both in France and in England when the return part of the visit takes place.

There's also brilliant relationships between Faith and her family - her grandmother, always one of my favourite characters, moving in to stay with them is hilarious - while I've laughed far more at this one than at anything else I've read this year. As hilarious as it is, though, it's the warmth with which Candy Harper tells the story that really makes this completely wonderful for me. The last few pages here feel like they may be the natural endpoint for the series - and while I loved them and would in some ways be happy for them to be the last we hear of Faith and her friends, there's a large part of me which just wants to BEG Candy Harper to write dozens more books about them.

Definitely the best yet of this fabulous series. Generally I need a bit of time to think about how good something is and where it fits in with the other releases so far this year before throwing around accolades like "My Favourite YA book of 2015", but it's the only one I've read in the last 12 months where I've been SO desperate to share my love for it that I've written a review within a couple of hours of finishing it (there are a lot I've really loved that I've still not reviewed at all.) AND it's the book from this year I think I'm most likely to reread time and time again. So...