I feel that it would be ridiculous to talk about the last week without mentioning the tragic events that occurred - but I don't know what to say, to be honest, other than my heart goes out to people across the world killed or injured in the tragedies.

Events like those of the last week can bring out the best and the worst in people. I'm so glad my Twitter timeline was full of people rallying around each other, supporting people of different religions and races to themselves - but I wish more people in the world acted in this way. I thought Sita Brahmachari's Guardian list of books to breed tolerance was an exceptionally useful resource to share.

In addition, my friend Wei Ming Kam shared our resource sheet from our diversity workshop at last month's YA Shot. Following the people and organisations on that list has made me a more informed and, I hope, better person.

One of the people I've learned most from is Kaye (@gildedspine), whose thought-provoking tweets on the depiction of faith in YA are Storified here.
For an eye-opening, thought-provoking look at race, I've mentioned previously I adored Master of None on Netflix. Great piece with star and creator Aziz Ansari talking aboutrace and Hollywood in the New York Times here.  Speaking of Master of None, Bim Adewumni’s crush piece on Kelvin Yu is a really fun read!

Morgan York's post on demisexuality is still one of the best, and most important to me personally, posts that I've read all year. This post by her on gatekeeping in the LGBTQ community is also superb, as is Kayla Whaley on the Toast about the summers she spent at a camp for disabled kids.

I love visiting new bookshops, so it was fab to see Books Pavilion open in Covent Garden! I'm HOPING to get a blog post up about them soon with more pictures.

It always slightly frustrates me hearing about great US books which, as far as I know, aren't making it over here. However I continue to yell about them, partly because I try and get some imported and lend to people, and partly because there's surely at least a miniscule chance someone with the power to change that might read this. Trans author Meredith Russo's If I Was Your Girl, about "about a beautiful, intelligent, blonde transgender teen girl who forms a loving bond with a straight male high school football player", sounds amazing - so much so that I'm mentioning it twice in a week. I hadn't picked up on Alloy Entertainment's involvement last time I posted about it. It's really heartening to see Alloy, the book packagers famous for successes like Gossip Girl, The Vampire Diaries and Pretty Little Liars, on board with this one - it gives me great faith that it will be a smash hit. 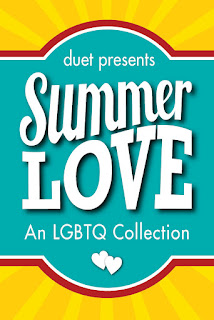 I posted last week about Duet Books's stunning anthology Summer Love being reduced to £7.23 on The Book Depository. I thought then that that was a great buy (and stand by that!), but it's now even cheaper at just £5.70 - nearly 50% off! In addition, next week Duet are going to release the stories as stand-alones, which sounds like a fantastic idea. If you want to try one of them, then I would recommend anything in there, but especially Naomi Tajedler's What The Heart Wants (my short story of the year so far), SJ Martin's The Most Handsome, and Suzey Ingold's The Willow Weeps For Us.

Another bargain on TBD at the moment, Dahlia Adler's Under The Lights, which is just £5.93. Not published over here (yet - can someone change that?!) this is a companion novel to Behind The Scenes but works perfectly well even if you haven't read the first book. It's a wonderful f/f romance with a really happy feel to it. Completely charming and gorgeous.

And there's a brilliant Hello Chelly post on Dahlia Adler's Just Visiting (out last Tuesday! But in US only, unfortunately :( )

Speaking of bargains, I'm scarily suggestible and my friend Caitlin is amazingly convincing, so when she started talking about amazing Six Of Crows merchandise in a group DM, I had a feeling it would end up being expensive. Using what little willpower I had, I successfully kept my purchases down to just one tote bag- which, arguably, I don't actually NEED, I guess. However how can you resist something this gorgeous?!  (Especially since it was reduced at the time AND had free P & P, making it an even better bargain.) It's on its way to me, but Caitlin's already received her mug, and was kind enough to let me use her picture here.

Lots of great stuff coming from the wonderful Teen Librarian Toolbox, who'll be taking a much-needed look at mental health in YA next year. One of the books I think is most important in the way it looks at mental health - especially in its positive portrayal of medication and therapy - is Patrick Ness's The Rest Of Us Just Live Here, so it was great to see TLT give it a wonderful review.

Their Sexual Violence in YA Literature Project is also well worth checking out if you've not seen it before (or, of course, rereading if you have!)

It's really great to see people talking about the portrayal of sex in YA - Jo's Sex in Teen Lit month at Once Upon A Bookcase has brought some excellent posts; in particular this Jenn Bennett guest post last week. And on OuaB, Jo's got a schedule for her fabulous Bookish Spinsters feature.

It was awesome to reveal the wonderful Paul Young and James Macey cover for Caroline Lawrence's Escape From Rome (Orion Children's Books) over on MG Strikes Back. We also saw the stunning UK cover for The Girl From Everywhere by Heidi Heilig (Hot Key) - I THINK this is a Jet Purdie cover, but will try and double-check this! Fabulous PW review of TGFE, which is one of the 2016 releases I'm most excited for, as well.

One of the coolest things about the past week has been seeing people receive their Illumicrates! My friend Daphne, fabulous blogger at Winged Reviews, has done an amazing job of putting this together. I've included Stacey's picture of the box, rather than showing the contents, to avoid spoilers, but you can head over to her blog Pretty Books to see them for yourself if you'd like to. Also on her blog, her book haul for the past couple of months - lots of gorgeous ones there! And if you want to be part of the excitement of Illumicrate in February when the second box is sent out, go to their website to sign up to be informed when spaces are open for more subscriptions.

Continuing the theme of 'cool bloggers I know doing amazing things', VERY exciting news for The Book Smugglers, who are publishing a new Kate Elliott short story, set in the world of her brilliant Spiritwalker trilogy! Having been a huge fan of the epic novels, I can't wait to read The Beatriceid on December 22nd. And there's a great review of Elliott's Black Wolves on B & N - this looks stunning too!

I loved this Book Riot article on classic lesbian literature - I'm definitely planning on trying to read some of those picks next year, especially as I'm determined to do better in Stacey's #2016classicschallenge than I did in this year's version! (If you're going to join this, by the way, the newsletter can be signed up to here!)

It's very cool to see that the RNIB's Talking Books service is now free to access for all blind and partially sighted people! 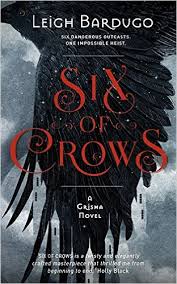 One of my favourite posts to write all year has been this Do's and Don'ts of Leigh Bardugo's Grishaverse; I also enjoyed writing a 'Ten Reasons To Read Six Of Crows' over on Teens on Moon Lane. Basically, Leigh's books are very fun to read AND to write about!

Penguin Teen's most wanted Spring 2016 books includes Rebel of the Sands, which I read last week - this is a fast-paced read with brilliant world-building and an unforgettable heroine!.


I love this great Sue Moorcroft post on writing and social media, and this wonderful piece on The Pool on books celebrating female friendships from Sinead Gleeson. Two great pieces to read together are Lucy Mangan in The Stylist on the Instagram illusion, and Robyn Wilder for Elle UK on presenting herself online 'unfiltered'. Also on Elle, brilliant Anna James gave us a superb feminist reading list! 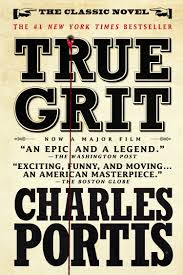 There's a great Natasha Carthew guest post on True Grit on this blog, while Kate Boorman and Ryan Graudin took part in Teens On Moon Lane's 5-4-3-2-1.

Some reviews I really enjoyed reading
Never Evers by Tom Ellen/Lucy Ivison, reviewed by Sofia.
This Is Where It Ends by Marieke Nijkamp, reviewed by Debbie.
Island by Nicky Singer, reviewed by Kieran Fanning for MG Strikes Back.
The Whispering Skull by Jonathan Stroud, reviewed by Stacey.
The Wolf Wilder by Katherine Rundell (my book of the year so far!), reviewed by Reader of Fictions.
Refuge by Anne Booth and Sam Usher, reviewed by LH Johnson.

And great interviews this week as well - fabulous one with Philip Pullman on Slate, and wonderful Bookish Treasures one with Brandon Sanderson.


I'm completely hooked on The Hidden Books Game from National Book Tokens, and also their lovely poem Choosing A Book Is An Adventure In Itself!

It was awesome to see Colour Me Mindful feature in Madeline Shaw's video on sleeping tips. I also really loved my friend Melanie's photos of a couple of pages she'd done in these gorgeous books, and she was kind enough to let me share them with you.

Finally, my friend Faye is running a UK Book Blogger Secret Santa! If you're interested, you have until 22nd November to sign up - it sounds fab!

Offline, I managed to go out every night, which probably explains why this recap's taken so long to put up, and why I ended up in bed ill last night - oops. Having said that, Into The Hoods and the ballet of Romeo and Juliet were fun, Jane Eyre with Stacey was great, and In The Heights with Ming, Liz, Debbie, Charlie and Zen was the best show I've seen in several years - utterly breathtaking; an absolute MUST-SEE if you're a fan of musicals! It's on at King's Cross Theatre, and the run's just been extended until April. Grab tickets if you get the chance! We also went to a fabulous adult colouring night at Drink Shop Do on Monday where Stacey wowed myself, Debbie and Faye with her super-speedy colouring. (And she was STILL neater than I was, somehow.) My effort below, along with an 'in progress' shot of our table. Thanks so much to Drink Shop Do and Michael O'Mara Books for the fabulous night! The pictures are from The Menagerie, and Richard Merritt's illustrations are stunning. 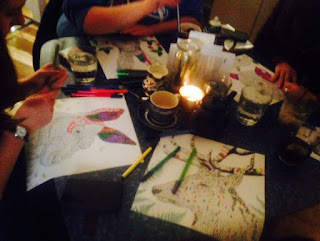 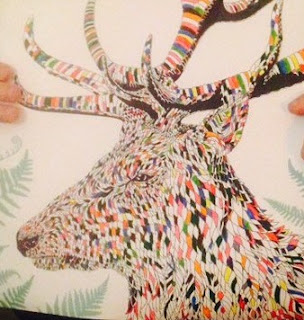