I'm a big fan of Nick Bryan's Hobson and Choi series and really enjoyed his blog post for me on the influences for the series around the time of the Rush Jobs release, so when awesome publicist Faye Rogers offered to arrange another great guest post from him I was hugely pleased! 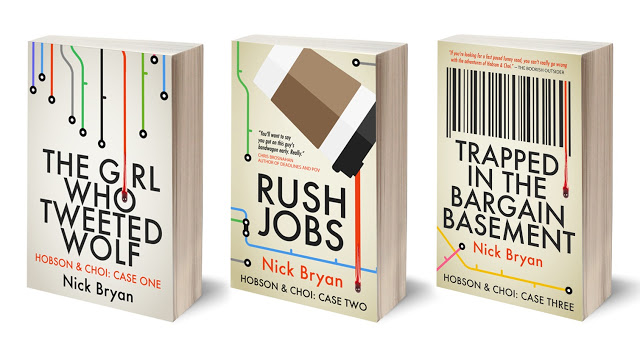 In the Hobson & Choi books, regular shops and businesses are revealed to have a terrifying evil dark side full of crime, exploitation and outright evil. There was the underworld pub in The Girl Who Tweeted Wolf, a dark recruitment agency in Rush Jobs and Trapped in the Bargain Basement’s secretive shopping centre.

That’s often the most fun part of the series, to be honest – spotting everyday businesses/organisations and making them a front for something awful. So, to mark the release of the third book, here are a few more crime-riddled high street regulars which… probably won’t be appearing in future H&C books. (Although they might.)

Up and down the high streets of Britain, charity shops sell second hand items for worthy causes, letting us either feel good about handing over a bag of our junk or buy someone else's old property without the ever-present worry that we’re funding their drug-dealing.

But what if they were evil? What if charity shops were actually throwing most of your donations into a massive furnace to burn to encourage chemical reactions, whilst selling the few worthwhile items to fund ingredients and chemistry equipment for… yes, drug dealing.

Well, hospitals are fine, of course? They make people better, they're run by the good old National Health Service (if you're in Britain), a cuddly organisation that wants to let us heal everyone else.

But what if they were awful? What if they were run by a cult devoted to destroying the planet through over-population? Just think, they could let us die when we get ill, but instead they cure us, so people just keep surviving and consuming and burning fossil fuels and throwing nappies into landfill sites and soon the planet will be an uninhabitable mudball.

Of course, libraries are cuddly. You rent books, sit in reassuring quiet, the world is full of knowledge and calm. They serve the community, spread stories, another way we all pitch in to lift each other.

But what if they were nauseating? What if every library item contained a tracker, enabling them to guarantee the exact home location (none of this 'proven home address' rubbish) of each person, which the library then sells to the highest bidder – such as marketing companies, loan sharks, burglars seeking heavy media consumers and anyone who doesn't like you?

The internet is a life essential for many of us nowadays, but sometimes you won't have it when you need it. Maybe your smartphone is dead, the connection at home isn't ready because you've just moved, and that's when internet cafés are there to save the day!

But what if they were soul-crushing? What if every computer had a keylogger installed for identity theft purposes? And then, once they'd stolen your online identity, they had plastic surgery to steal your real self, killed and dumped you in a ditch, started posting platitudes and images of inspirational quotes on your Facebook and none of your friends even noticed the difference?

They look after children! They change their nappies! Keep them busy so that the parents can have some breathing room to manage their real life! Good old nurseries!

But what if they were disgusting? What if they'd realised that children, if deployed correctly, could drive anyone over the edge? What if, underneath each nursery, is a room rented out to mobsters and shady government agencies where suspects and rivals are tied to a chair, unable to move and left among screaming, pooing children until they crack?

Hopefully the above hasn't left you unable to walk down the high street without trembling. If you enjoyed this short stroll through a grim mirror town, why not pick up the Hobson & Choi series (first book free on digital!) and see how dreadful I can make the everyday over the course of a full length novel?