I'm not doing all that much on this blog at the moment (there's more on Teens on Moon Lane if you miss me!) but every so often, an opportunity comes along that I just can't turn down. The chance to take part in the blog tour for Leigh Bardugo's Six of Crows, one of my favourite reads for ages, was one of those times! 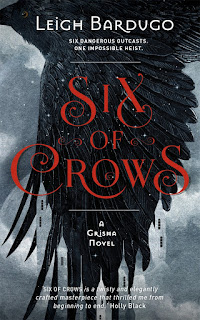 Six of Crows is an incredibly fun heist story set in the Grishaverse, the world that Bardugo created in her first trilogy which so many of us fell in love with. It has six fantastic lead characters, brilliant relationships, and a plot with so many amazing twists and turns that I felt dizzy reading it at times. As much as I LOVE the Grishaverse, though, it's a pretty dangerous place - so I'm very happy to be presenting my tips for surviving if you find yourself there! It's a joint UK/US blog tour so head over to Bookiemoji for more tips on the subject, and don't miss Winged Reviews and Cuddlebuggery, two of my favourite blogs, who had great posts on book boyfriends/girlfriends from the Grishaverse yesterday!

PLUS, we have a fantastic competition to win a swag pack as well being run over all 12 blogs taking part!

But before we get to my tips, thrilled to hand over to author Leigh Bardugo...


Hey, Jim, thanks for being a part of the Six of Crows blog tour! I spend most of my time writing books or travelling to promote them, so I figured those were my best bets for offering Dos and Don'ts. I shared my travel tips over at Bookiemoji, but I have to admit, I'm always wary of handing out writing advice because everyone's process is so different – a big part of becoming a writer is figuring out what works for you. Even so, here are a few rules I try to follow myself:
Do avoid the internet and social media. This has been tough for me lately because I've been promoting Six of Crows while writing its sequel, but I truly believe being online is a drain on creativity.

Do let yourself be inspired by everything. I know everyone likes The Italian Job, but I didn't. I really love the team dynamics on Leverage, but they get away with a lot of ridiculous stuff when it comes to heist logic. The Dirty Dozen is a spectacularly weird film that doesn't hold up particularly well on re-watching. Even so, I found it really helpful to see the choices writers made with these projects and they helped to move my work forward. Just make sure research doesn't turn into a day (or twelve) lost to Netflix bingeing.

Do go outside! I have a terrible habit of getting stuck in front of my computer and staying there. Walk your dog, go for a swim, or just go dance around in your back garden. I do it all the time. You heard me, Google Earth.

Speaking of tips, here's mine - hopefully these are of use...

DO: Stay close to Sturmhond.

I think people reading this post have PROBABLY read the original trilogy, but just in case, I won't say too much about Sturmhond.

To be honest, that might be an excuse, because really, this commander is pretty much indescribable. He had my heart from the moment he exploded onto the page in Siege and Storm, while his triumphant entrance in Ruin and Rising had me practically standing up and cheering while reading. He is brilliant with various weapons, incredibly charming, extremely intelligent. And oh, so hot!

It's easy to see why my friend Daphne opened yesterday's 'Book Boyfriends and Girlfriends of the Grishaverse' post with him.


DO: Be careful who you trust.

The Grishaverse is a dangerous place. Having the right person behind you or at your side can be a real lifesaver. But as numerous people have found out, having someone at your side who doesn't have your best interests at heart can be deadly.


DO: Kiss as many people as possible.

If I'm completely honest, I don't know whether kissing people in the Grishaverse is actually THAT beneficial to survival. But Leigh writes so many super-hot characters that I defy anyone to NOT read the books and daydream that they're in there locking lips with as many people as possible.

There are good guys in YA. There are 'bad' guys with a heart of gold. There are surly boys who melt for the right girl (or boy). But as Leigh said in her introduction over at yesterday's post on Cuddlebuggery, "Kaz’s crew are deadly, desperate, and occasionally legitimately despicable." That's not to say I don't like him - he's an awesome character. But if you cross him he WILL have his vengeance.


DON'T: Fall for the Darkling.

Look, I know I said that you should kiss everybody you could. And I have huge respect for Steph Sinclair over at Cuddlebuggery for being generally awesome. But some guys have TOO MUCH of a dark side, and everything Leigh said about Kaz's crew is true 100 times over of the Darkling. People really should remember that instead of falling for the whole "tortured but hot routine." Even if he is so, SO hot. Ahem.


DON'T: Try to break into the Ice Court.

It's completely impenetrable. To even try to undertake what's pretty much a certain suicide mission would be a ridiculous idea.

You'd have to be really stupid to give it a shot.

Or, of course, REALLY arrogant, full of yourself, and generally awesome.


From 24/9 - 29/9, bloggers in the US and UK will be paired up to share their own Six of Crows-inspired lists, such as six tips for surviving the Grishaverse, six signs you do/don't have what it takes to join Kaz's crew, and more.

But wait. There's more! Enter to win a Six of Crows prize pack full of US AND UK swag by commenting on all 12 blog posts by 11:59pm EST Friday, October 2.

So, what would be your top tip for surviving the Grishaverse? 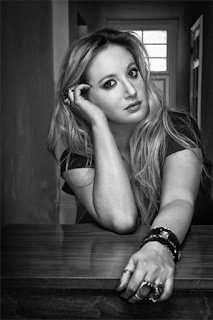 Leigh Bardugo is the author of the New York Times bestsellers Shadow and Bone and Siege and Storm. She was born in Jerusalem, grew up in Los Angeles, graduated from Yale University, and has worked in advertising, journalism, and most recently makeup and special effects. These days, she lives and writes in Hollywood, where she can occasionally be heard singing with her band.
Check out the rest of the tour stops by following the #SixofCrows hashtag. Also, don’t forget to catch Leigh on her #MagicandMayhemTour! 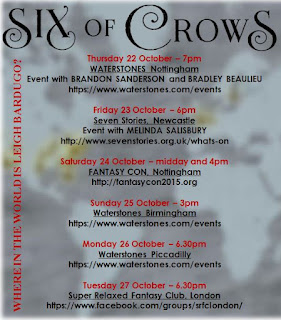