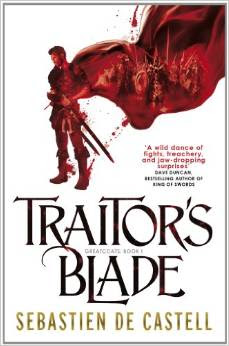 Falcio del Mond and his companions Kest and Brasti used to be Greatcoats; travelling Magister's upholding King's Law. Then they stood and watched as their King was killed by the Dukes who took control of the kingdom, and their company of 144 supposedly brave men and women are scattered throughout the land and reviled as traitors. The three are working as hired security while hoping to fulfil their last promise to the King, until one of their clients is killed and they're framed for his murder. Running for their lives, they're caught in a conspiracy which could have dark consequences for the entire land.

I was completely drawn into this from the very first chapter, which nails an outstanding mix of excitement and humour - it's a book which never takes itself all that seriously, reading as a swashbuckling fantasy with boastful leads who know they're better fighters than nearly anyone they can come up against. That same mix of thrilling action with a fairly light touch is sustained for most of the book, with just a few moments later on which see the plot take a darker turn, and it's a refreshingly fun read. It's also set in a very interesting world - magic exists, but it plays a major role in rather few scenes; this is definitely low fantasy with political intrigue - just WHAT are the evil dukes planning? - being the most important part of the setting.

I'll be completely honest and say that I could have lived without the fridging of the hero's wife, who we learn in a flashback (thankfully, not an explicit one) was raped and killed. But there is SO MUCH good stuff here! The friendship, loyalty and bickering between the three central Greatcoats is fantastic to read, Falcio has an amazing voice, and de Castell's fight scenes are staggeringly exciting. There are also numerous superb twists which left me constantly guessing what would happen next - and also what HAD happened in the past; there's a really strong use of flashbacks to show the history of the Greatcoats from Falcio first hearing about them, to he and the King restarting them, to the terrible night which saw them stand aside and let their king be killed.

I'm intrigued to see where things go in book two, which I note is substantially longer. On the one hand, this felt really refreshing as a fantasy novel weighing in at around 350 pages is fairly rare in my experience. On the other hand, so many threads come together at the end of this one - particularly some very promising character development for several female characters - and we get such a brilliant set-up for the next book that I'll trust de Castell to keep my attention just as glued to his writing in that book as I was in this!

Hugely recommended, perfect for fans of Scott Lynch's wonderful Locke Lamora series - but also a great entry point for people who haven't read too much fantasy and are looking to dip a toe into the genre.
- August 08, 2015