So this is the first time I've done a WOW for about 2 years, I think, but I HAD to do one to share my excitement over my friend Katherine Webber's book deal, which was announced yesterday!

Wing Jones, set in the run-up to the 1996 Olympics in Atlanta, is about a girl called Wing who, having one grandmother from China and another from Ghana, often feels caught between worlds. But when tragedy strikes, Wing discovers a talent for running she never knew she had.

Why I can't wait:

I've been super-lucky and read the first 10 pages or so and it's gorgeously-written, with an amazing voice! Lauren James, who's been even luckier and read THE ENTIRE BOOK, describes it as "perfect and lovely and satisfying and beautiful", which would be a good enough recommendation for it to be high on my list without knowing Katie. But since I do know Katie, and her taste in books is AMAZING and she's hugely knowledgeable about YA, I'm quietly confident that the fabulous 10 pages I've read so far are the start of something truly special.

Wing Jones will be released by Walker Books in 2017. It seems a LITTLE early to start counting down the days - but only a little!

Top Ten Tuesday: The Last Ten Books To Come Into My Possession

I kinda feel this week's topic is aimed at people with a MUCH better memory than me, but here are ten which I've got recently. I wouldn't guarantee they were the last ten, but not too far off, hopefully! Huge thanks to Orion, who gave me quite a lot of these at their fab preview ending for bloggers.

The Boy Who Wept Blood by Den Patrick - I haven't quite got round to reading Den's first book yet, but the chance to get a signed copy of this was too good to pass up!

Twelve Kings by Bradley Beaulieu - LOTS of excitement about this at the Orion Preview evening; it sounds fabulous! It's an epic fantasy about a gladiator girl seeking revenge against twelve rulers - what's not to love there?

Under The Lights by Dahlia Adler - I pre-ordered 2 copies from The Book Depository to support Dahlia as she's wonderful and it's sadly not being published in the UK. As soon as I'd finished, I ordered two more, so I could pass them onto people. A gorgeous, FUN read!

The Collected Stories of Rumpole by John Mortimer - Grabbed from the library at the weekend as I was going through a reading slump and the Rumpole series, like PG Wodehouse's Jeeves stories, can always be relied on to remind me why I love reading.

The House of Shattered Wings by Aliette De Bodard - Another from Orion Preview that people were incredibly excited about! It was described in Publishers Weekly as "A fantastical spy thriller that reads like a hybrid of le Carré and Milton" - not two authors I'd expect to see referred to in the same sentence, so very intriguing!

Red Queen by Victoria Aveyard - I've seen a bit about this and not been that bothered before, but we Skyped with Victoria at the preview evening and she was brilliant, so I'm really looking forward to reading it now!

A Thousand Nights by EK Johnston - About halfway through this at the moment and really enjoying - very well-written and the setting is superb; the culture is very well-developed.

The Butterfly Shell by Maureen White - Haven't heard of this, but publishers O'Brien sent me a copy. Not sure if it's my kind of book but looks intriguing.

Steelheart by Brandon Sanderson - I've only read The Rithmatist of Sanderson's before but really enjoyed that; looking forward to this one!

Pretty Is by Maggie Mitchell - Yet another from the Orion preview! It follows two 12-year-old girls who are abducted, but the bulk of the book is set 20 years later, as they're reunited because a film with a shockingly familiar plot is being made.
- July 14, 2015 No comments: 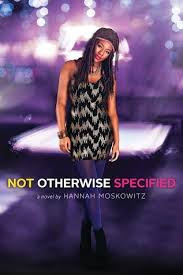 Etta is sick of her hometown in Nebraska, and can't wait to get out of there. Feeling alone as she's been ditched by ex-clique the Dykes due to her relationship with a boy (she's bisexual, they're lesbians and many of them are biphobic), she turns to Bianca, a younger girl in her eating disorder support group for friendship. But while Ella's heart lies in ballet - which she's given up on due to not being tiny or white enough - Bianca dreams of getting into the New York theater academy that both girls are auditioning for. Bianca is straight, but her brother James is dealing with problems of his own, hiding his sexuality from his religious family. Can Etta and Bianca save each other?


There's an extremely interesting post here from editor TS Ferguson about characters who aren't defined by their sexuality - following on from Robin Talley's tweets about the problems with the phrase 'just happens to be gay'. For me, TS's post made me think of Etta immediately, because while her sexuality is a huge part of the book, and a cause of the major conflict between her and the Disco Dykes, she's defined by so much more than this. Her race, her sexuality and her eating disorder all contribute to her character, but so do her protectiveness of her younger sister and of Bianca, her long-standing friendship with Rachel, her dancing dreams, and her incredible personality. They all combine to make her a really superb character and her voice is breathtakingly good. I also loved her confidence in herself - she's a very proactive character, seeking help for her eating disorder without being pushed to do so, and being well aware that she's in the right in the argument with the Dykes. She is the strongest character in the book by a long way, although Bianca is another interesting one, struggling to reconcile her religious beliefs with her brother James's sexuality, while James, his friend Mason, and Rachel are all well-written as well.


The way the relationships develop through the book is another major plus, especially Etta and Bianca's, but also the really complicated long-term friendship that Etta has with Rachel and Etta's interactions with Mason, who is clearly significantly more into Etta than vice versa.  I think it's Ella's narration which made me really fall in love with the book because of the strength of her voice, but in addition to that, there's a strong plot which kept me guessing and doesn't go the obvious route.


Slightly more spoilery bit - stop reading now if you want to go in with little knowledge of the ending!
I love books which end up happily for all the characters I like, leaving me reassured that they'll have a great future. This doesn't quite do this - but it's the right choice. Because with problems as big as Bianca, Etta and James have, it would have felt like a cop-out to wave a magic wand and have them all miraculously sorted out. We get an ending that's as happy as it could be without cheapening the impact of all that's come before, I think. We know that these characters have a long, hard road ahead of them - some even more than others - and Etta even specifically acknowledges this, when talking about the possibility of Bianca hiding food - saying "at some point in this she probably will". But they're ON that road to recovery/happiness, at least, at various different stages, and it feels like a wonderful, hopeful way to end the novel.

Speaking about wonderful ways to end the book, there's a climactic speech from Etta which is one of the best I've read in a long time, and a gorgeous gesture of friendship at the end which made me smile massively. As I said above, a really fantastic read!

I'm currently reading, and really enjoying, Amy Alward's Potion Diaries, and I was lucky enough to go to the brilliant launch earlier in the week - so I'm very happy to be on the blog tour! Over to Amy, to tell us about where she writes. 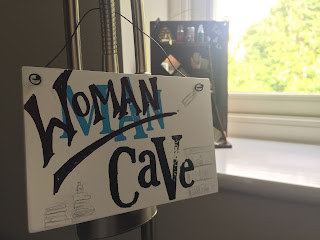 At the end of last year, I moved out of London to the gorgeous medieval city of Winchester- and consequently moved from a pokey flat into a house with actual stairs. (What is it about stairs that makes you feel so grown up? I have no idea).

Multiple levels aside, by far the best aspect of the move was that I got to turn a small, single bedroom into a dedicated writing space. My creative sanctuary.

In other words… I created my own personal woman cave.

For me, a woman cave is 100% necessary because I have a bit of a weird process when it comes to writing. I often love to recreate that feeling of reading a book under the covers by flashlight- that kind of enclosed space that makes you feel warm and safe. When I feel enclosed, my imagination seems to soar. I’m definitely not what you would call claustrophobic! That’s why I lined every wall with dark wood bookshelves and stacked them floor-to-ceiling with my favourite reads. As a publisher and an author, I’ve collected a lot of books over the years, and somehow they just keep on multiplying. 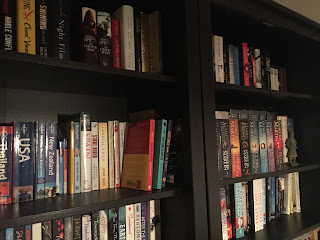 In the early stages of writing, I also like to use old-fashioned tools- just a fountain pen, ink, and a good sturdy notepad. I often make the mood even more atmospheric in my woman cave by drawing the blinds and lighting some candles. I admit that sometimes my husband comes home on a bright, sunny day and wonders why his weird writer wife is holed up in her library/cave writing by candlelight and pretending she lives in the Middle Ages…but he quickly gets over it.

Whatever gets the creative juices flowing, right?


Amy Alward is the author of The Potion Diaries and editorial director for a leading children’s publisher. She is addicted to coffee, books and adventure. Get in touch via Twitter: @amy_alward or Instagram @amyalward!

You can buy The Potion Diaries here. 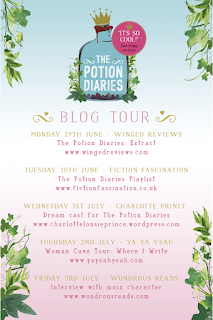