Guest Post: Keren David on The Language of This Is Not A Love Story

Really pleased to present a great guest post from one of my favourite YA contemporary authors, the wonderful Keren David, talking about the language used in her recently released This Is Not A Love Story. 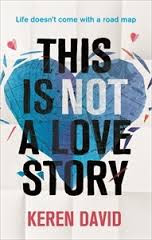 One of the most important things that I do when I start to write a book is make decisions about language. What sort of words would my narrator use? How much slang is necessary, and how quickly will it date?  Will there be swearing? If so much much, how strong?

Writing This is Not a Love Story though posed greater challenges. It’s set in Amsterdam, and one main character is bilingual. How much Dutch should I use? Do I need to translate every Dutch phrase?

Additionally, both narrators are Jewish, meaning I needed to think about their use of ‘Jewish words’ which might be Hebrew or Yiddish or just London-Jewish slang in their vocabulary. How many of those words could I use? How much needed to be explained?

I decided to write as authentically as possible, dropping in Dutch, Hebrew, whatever as suited the character. I’d translate if it fitted into the text without feeling clunky. I’d leave it up to my editors to tell me if a word needed more explanation, or even a glossary.

With my ‘Jewish’ words, the editor took the decision not even to italicise words like ‘frummer’ (a very religious person), ‘shokelling’ (a rhythmic rocking movement associated with Jewish prayer), ‘Shoah’ (the word used in the Jewish world for the holocaust, literally meaning catastrophe) and beck. Beck was a difficult word for me to include, as I don’t like it very much. It means a certain sort of Jewish teenager –rich, spoiled, wearing all the designer labels. It’s a piece of London slang that’s persisted for decades - my mum knew it, I did and now my kids talk about becks. It seems now to mean someone popular - in my day it was more of an insult. Anyway there was no possibility that my characters wouldn’t know and use it, so it went in. Barmy and batty, for barmitzvah and batmitzvah (coming for age ceremonies for 13-year-old boys and 12-year-old girls) are also current slang, and I like them so much that I couldn’t leave them out.

Hopefully the meaning of these words are clear by context. But if not, then they give my readers a small taste of what it’s like to be in another culture or country, where you don’t always understand what’s being said to you. Do you reach out and embrace the chance to learn? Or are you unsettled by the unfamiliar?  The book is full of examples of cultural misunderstandings and clashes, opportunities missed and feelings hurt because people don’t fully understand what they are being told or fail to be as honest as they could be.

Ethan is the character in the book who’s suffered from being taken from one city and language (London, English) and put into another (Amsterdam, Dutch) at a very young age. He makes it clear that it was difficult, but rather typically he took the difficulties, mastered them, and now uses them to make other people feel uncomfortable. I hope that readers will find Ethan’s struggle to communicate quite poignant - he has two languages at his disposal, and he thinks he’s embraced Dutch openness, but when something really matters to him he can never quite find the right words. ‘I’m just crap with people,’ he says, and I think a lot of teenagers will feel the same.

As someone who lived in Amsterdam for eight years but never became fluent in Dutch, I noticed how much of the city’s culture is visual - art, architecture, photography, even interior design and gardening. Sometimes communication and culture speaks in a universal language.  Right at the end of the book, one character watches the others’ body language, and it speaks louder than any words. This is not a love story - but it might just be the prequel to an epic romance.
- June 18, 2015