Looking forward to Sarah Sky's upcoming Catwalk Criminal, so really pleased to be helping to kick off the blog tour today!

I took a trip up The Shard as I wanted it to be the dramatic backdrop for a gripping start to the book - Jessica's first official undercover mission for Westwood, which goes horribly wrong. I spent a lot of time looking out the windows, trying to figure out potential escape routes. I also quizzed an employee about how the windows are cleaned, which was crucial for my plot.
I scouted locations for London Fashion Week and opted for the BFC Courtyard Show Space at Somerset House - the centre of another plot twist, which I can't reveal!

I love doing all the research for the Jessica Cole books, particularly around the spy gadgets. This is my third year of going to a spy conference in London, to check out all the latest equipment - from unmanned aerial vehicles equipped with gamma sensors and magnetometers to antidotes to biological weapons. I've learnt about surveillance robots, drones, thermal sensors, facial recognition technology and encrypted mobile phones - as well as where to get the best coffee and muffins in the conference hall when I'm all spied out!

I actually got the idea for a crucial plot twist in Catwalk Criminal from attending a seminar at the conference. A speaker was discussing the biggest future terrorist threats to the UK. Let's just say it was an eye-opener and not what I'd expected at all. I knew it would make a great feature in a spy novel and I ended up basing my book around this concept.

I delved into the world of hacking before writing this book. I read up on famous hackers and hacking organisations and watched documentaries about their shadowy worlds. I found the dark web fascinating - but also extremely scary. Recent high profile cases such as the hack on Sony and the widespread leaking of celebrities' private photographs through iCloud continue to highlight the vital importance of good cyber security. Again, I attended a seminar about hacking at the spy conference and was pretty shocked by how easy it is to hack into some very high profile companies. Documenting all your important passwords in a folder called 'passwords', is not a terribly good idea...

I love deciding on the clothes Jessica will wear in her modelling shoots and usually scour glossy magazines, Pinterest and the internet for inspiration. This time, I also looked at designers who are currently combining the latest technology with cutting edge fashion. Interestingly, in the weeks leading up to Catwalk Criminal's publication, TV presenter, Donna Air, wore an interactive dress to the BAFTAs, which lit up on the red carpet. We're probably going to see a lot more digital designs on the catwalk in the future.

Fans of Code Red Lipstick told me they wanted to hear more about Jessica's best friend, Becky. She played a minor role in Code Red Lipstick, but I wanted her to feature more prominently in this book. She becomes an important part of the plot and will be a catalyst for Jessica's future actions. Jamie also takes centre stage, but it's not plain sailing. If Jessica was finding it difficult to lie to him in Fashion Assassin, it's even harder now that she's been implicated in a cyber terrorist attack on London and the States. Jamie's not too keen on who she's spending all her time with either - a new character called Zak.

Zak was fun to write - a gorgeous bad boy who harbours a secret. Jessica feels a connection with the top US model, but hates his arrogance and the fact he's getting in the way of her romance with Jamie. He's going to be trouble...

I enjoy writing Jessica into corners, to see how she can escape. I know fans of Code Red Lipstick and Fashion Assassin expect a good twist as well as red herrings. I think they'll be pretty shocked by the way things turn out...


8 Meeting fans of my books

I enjoyed the UKYA event in Birmingham and it was great to meet fans of Code Red Lipstick and Fashion Assassin. I hope to meet more Jessica Cole enthusiasts soon. I'm talking about the History of Female Spies at Beaconsfield High School's TEDx conference on July 3, alongside authors Non Pratt and Tom Pollock. I'll also be at Hillingdon Libraries' YA Shot on October 28. Hope to see some of you there! 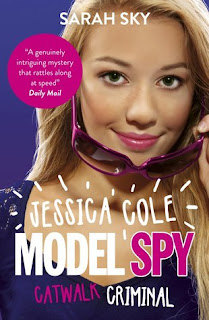 Blurb:
Models, spies and lipstick gadgets in this fast-paced teen series. Jessica Cole has been recruited to Westwood, MI6's secret division of supermodel spies. Her first official mission seems simple at first, until it turns into the biggest cyber-attack ever known, threatening the security of the whole country. Then it emerges there is a traitor in the midst at MI6 - and suddenly Jessica herself is being accused. With no one believing her innocence, and the country on the verge of chaos, Jessica has no choice but to take matters of national security into her own hands and catch the culprit - fresh from the catwalk.

Information About the Book: 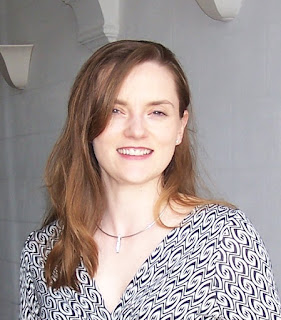 Sarah Sky is the author of Scholastic's Jessica Cole: Model Spy series with Code Red Lipstick and Fashion Assassin. Catwalk Criminal is published in June 2015.
Sarah is a freelance education journalist and lives in West London with her husband and two young children.
She grew up in Sutton Coldfield, West Midlands, and studied English at Nottingham University before gaining a post-graduate diploma in journalism at Cardiff University.
She trained as a journalist at the Western Daily Press in Bristol. Her highlight was interviewing screen legend Charlton Heston and lowest point was being sneezed on by a cow at a fatstock competition.
Sarah worked as an education correspondent for a national newspaper before going freelance. She now divides her time between journalism and writing.
She loves reading, baking, table tennis and martial arts. She's a green belt in kick-boxing and a brown with two white stripes at karate, currently training for black.
Author Links:
Twitter: http://twitter.com/sarahsky23
Goodreads: https://www.goodreads.com/author/show/8526263.Sarah_Sky
Website: http://www.sarahsky.co.uk