Video Blog Tour: The Mystery of the Clockwork Sparrow by Katherine Woodfine

I enjoyed reading Katherine Woodfine's debut, The Mystery of the Clockwork Sparrow, so I'm thrilled to have a video from her on the blog today! 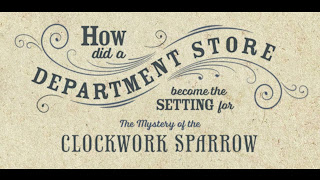 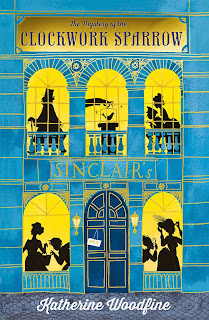 You are cordially invited to attend the GRAND OPENING of Sinclair’s department store!

After the death of her father genteel young lady Miss Sophie Taylor must seek employment.  She’s thrilled to join the staff at Sinclair’s, the most beautiful department store in London – and consequently – the whole world.  There she enters a world of bonbons, hats, perfumes and MYSTERY around every corner.

When the priceless Clockwork Sparrow is stolen from Sinclair’s grand opening exhibition, it is up to Sophie and her friends to bring the DASTARDLY villains to justice…

Katherine Woodfine is Arts Project Manager at Booktrust, the UK’s most prominent literacy charity. She is a true champion of children’s literature and throughout her time at Booktrust has project-managed the Children's Laureateship and worked on a huge range of other children's book prizes and initiatives, including YALC 2014, the UK’s first Young Adult Literature Convention, curated by Malorie Blackman.

She has reviewed and recommended children’s titles online, in print and on the radio as part of the founding team at Down the Rabbit Hole, a monthly show for Resonance FM discussing children’s literature.  She lives in London.  Follow Katherine on Twitter @followtheyellow.


Don't miss the rest of the tour, as well as Katherine's brilliant post on the Guardian today!


The Mystery of the Clockwork Sparrow Video Blog Tour