Review: Simon vs the Homo Sapiens Agenda by Becky Albertalli 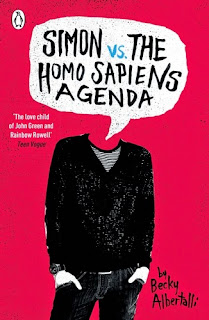 Simon Spier is sixteen, gay, and not out yet. But he IS enjoying a rather wonderful e-mail flirtation with Blue, another student at his school - it's just that neither of them know the other's identity offline. Simon is hoping that the secretive Blue will eventually let him in - and then things take a turn for the worst, as fellow student Martin gets his hands on an e-mail, decides he can use this knowledge to pressure Simon into hooking him up with Simon's friend Abby. Can Simon manage to come out on his own terms and win the boy of his dreams? And how will his friends and family react?


I have read a lot of amazing books with LGBT characters over the last few years, and would have immense difficulty picking the absolute best. How can you compare Lisa Williamson's stunning contemporary The Art Of Being Normal with BR Collins's gorgeous historical romance Love In Revolution, or Holly Black's fabulous fantasy The Darkest Part of the Forest, and say one is better than the other when they - and numerous others - are all pretty much perfect? That said, if I was asked which novel about an LGBT main character I'd had the most fun reading, Simon Vs The Homo Sapiens Agenda would win hands down. In fact, it's so utterly wonderful that it's taken me several months to get my thoughts on it down from incoherent squeeing to (hopefully) slightly more coherent analysis of just why it stands out so much.


Firstly, it's significantly lighter than many books I've read about LGBT teens, despite the blackmail part of the plot. Simon is such an amazing character - with a great group of friends, a love of Harry Potter, and an absolutely fantastic voice. The chemistry between Simon and Blue just via e-mails is superb, and the reveal of Blue's identity is a scene which has made my heart skip a beat every time I've read it (and that's quite a few!); it's so beautifully handled. I really liked that Simon's confident in his sexuality, as well - he's certain he's gay, and he's okay with that, with the conflict here coming from the thought of him being forced out rather than being able to come out at a time of his own choosing.  In addition, Albertalli's writing style is so fun and easy to read that I've just reread virtually the entire book after opening it briefly to double check a particular line!


A truly lovely read, which bears repeated rereading, and which I think is one of the freshest and most delightful debuts of the year.


As with yesterday's Read Me Like A Book review, I've gone into more spoilery details than usual here, as I wanted to mention a couple of things that it's pretty impossible to do without giving away a little bit. Maybe stop reading now if that's an issue?


I loved Simon a lot, particularly that he was a brilliant character who was very sympathetic, but who does make mistakes at times. In particular, he manages to really hurt Leah and Abby, separately, by things he should say but doesn't. However, he realises just how badly he's messed up in both cases, and talks to the two girls about it. (Yay for responsibility, and for meaningful conversations, and accepting when you've screwed up and trying to do better in the future!) I thought the supporting cast here was outstanding, and the side romance was between two of Simon's friends was nearly as adorable as the main one. As mentioned above Blue is a superb love interest, and the contrast between Simon and Blue, with Simon being far more ready to come out than Blue is, is an interesting one.(Also Blue adds to his iPod every song that Simon mentions in his e-mails, which is just adorable - yay 21st century romance!)


Even the guy blackmailing Simon is portrayed as somebody doing something utterly despicable but not, necessarily, a despicable person himself. It's a fine line to walk, but - probably because Simon is such a well-written character that we can believe he would potentially consider forgiving Martin, at least up to a point, and perhaps because the eventual apology he gives Simon seems completely sincere - it works.  I thought Simon's family were similarly well-written, despite their embarrassing tendency to make a big deal out of everything, and there's a conversation between Simon and his father which reads absolutely perfectly - it's clear that despite not always knowing the best way to react, and sometimes having difficulty expressing himself, Simon's father loves him and wants him to be happy. Also, the support Simon gets from his sisters is great!


Finally, it's really interesting to think about the assumptions people make, without even realising they're doing so, and there's a particular scene which brings this home excellently. (TOO spoilery to go into details about that, even after the warning, but you'll know it when you see it, trust me!)


Have you read this one yet? What did you think? Leave me a comment, or link to your review!