Todd Hasak-Lowy: 7 Stages You’ll Go Through While Writing a Novel in Lists

I'm currently reading, and enjoying, Todd Hasak-Lowy's Me Being Me Is Exactly As Insane As You Being You, which is a novel told in lists. I'm intrigued by the format, so when I got the chance to host a guest post from Todd, also in the form of a list, I jumped at it! 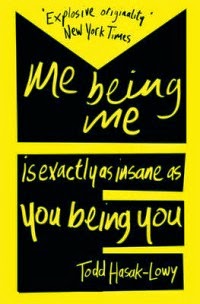 1. WONDERING IF IT POSSIBLE IN THE FIRST PLACE

After writing out a dozen or so lists on a whim, you ask yourself: Huh, can a whole novel be written in lists?  Well—you tell your giddy self—there’s only one way to find out.  So you give it a try.  You don’t worry about how good this novel in lists is or, more to the point, if a novel in lists is a good idea in general.  Welcome to the fun stage, the innocent stage, the manic stage, the stage free of doubt and self-loathing.


2. TRYING TO DECIDE IF WHAT YOU’VE WRITTEN IS ANY GOOD

Once you’re done with that full first draft (and, hey, congrats on that, very impressive, you wrote an entire novel in lists) you must figure out what to do with the thing.  But how can you tell if your novel in lists is any good?  Sure, to some extent you can answer this question the way you would with the first draft of any novel.  Are the characters interesting, is the story compelling, does the ending satisfy?  But then that whole list format, how do you know if that’s any good?  What are you suppose to measure it against?  How would you know if the whole gambit was in fact just a stupid idea?


3. OVERCOMING THAT SINKING SENSATION THAT THE WHOLE GAMBIT WAS IN FACT JUST A STUPID IDEA

You freak out.  Just a little, but you’re definitely freaking out.  Because what is everyone going to think?  Are they going to be willing to play along?  Will they accuse this novel of shameless gimmickry?  Okay, chill out.  There, that’s better.  But now you’re a little sad.  Actually, more than a little.  Because you feel yourself nearly ready to be convinced by others that the whole conceit might not work in the end.  But then, hooray, you decide you’re going to see this through.  Call it a hunch.  Or maybe just a wish.  Or maybe your editor talked you down.  Regardless, you’re going ahead with it, determined to make this thing the very best version of its strange self.


4. MAKING IT THE VERY BEST VERSION OF ITSELF, JUST IN TERMS OF ALL THAT REGULAR NOVEL STUFF, YOU’LL GET TO THE STRANGE STUFF LATER

Which is hard enough when revising a regular novel.  But this is no regular novel.  So now, lucky you (lucky determined, stubborn, pig-headed, supported-by-a-wonderful-editor you), you get to do stuff like the following:     spend a week trying to figure out how to make the elusive attraction between     the two main characters a little more palpable, a bit more concrete, just a tad less mysterious.  You pace your back and forth in your little office. You take long walks.  You lay awake at night.  Finally, while out with your loyal dog, it strikes you.  Hooray! At which point you realize: awesome, now I need to decide how to narrate that in list form.  Repeat this process about ninety-four times.


5. FINDING YOURSELF UNABLE TO DECIDE WHAT TO CALL THE WHOLE THING

You had a working title, right from the beginning.  But it’s pretty lame.  So you think, no biggie, I’ll figure out another title, after all every single one of the many lists in this book has its own title.  I’ve got a lot of practice coming  up with titles.  You write up a few for the whole book.  They stink.  You write up more than a few more.  You keep a separate file filled with such titles.  Every couple days you send some to your editor and/or agent and/or wife, and every couple days they say, separately or together, nope.  Then, who knows why exactly, your agent gives the manuscript to two interns, interns you’ve never even met.  He tells them, read this and pull out interesting phrases.  A week later, there’s a title.  You thank them over email.


6. HOLDING ANOTHER ELEVEN CONVERSATIONS WITH EDITOR AND AGENT ABOUT THE BEST WAY TO MAKE THIS ‘WHOLE LIST THING’ WORK

You can feel that the novel is getting better, in terms of all that crucial regular novel stuff.  But there’s some lingering reservations among agent and editor that this not-so-little book of yours is still going to scare off a lot of readers.  After cursing and dismissing such readers in strikingly immature fashion, you finally get over yourself and submit to the wisdom of your professional advisors.  You think and you think.  You tinker and tinker.  You walk the dog.  You write an entire draft that is 15% non-list, only to realize that this is all but admitting that the format is a pain in the behind.  Somehow, eventually,you come up with this solution: the narrative will oscillate with some regularity between very short lists and longer lists that read more or less (I’d say less, but whatever) like regular prose.  Magically this seems to work.  Holy crap, you’re done.


7. HOLDING THE AMAZING THING IN YOUR HAND AND VERY NEARLY MANAGING TO BE ONLY HAPPY ABOUT THIS

Finally, there you are with the actual book, the physical book, the one with the cover and everything.  The one with your name on it.  Wow.  You try to appreciate this, without worrying about how many people will read it or what they’ll think when they do or how you’ll explain this complicated book in two sentences to people generous enough to give you two sentences worth of their attention.  Then you catch yourself and wonder: Why is it so hard just to be happy about it?  But then, weirdest thing, for a second or two, maybe even ten, you really are happy.  Or at least satisfied.  Yes, you’re definitely satisfied.  Really and truly you are.  You actually did it.  Good job, you tell yourself.  Then you look up, already distracted by this newer manuscript you’ve been wrestling with.  It’s a disaster, albeit a genuinely promising disaster.  Okay, enough of the self-congratulation, time to get back to work.
- April 27, 2015