Recommendation: Anyone But Ivy Pocket by Caleb Krisp, illustrated by John Kelly

(Thanks to Bloomsbury for sending me a copy in exchange for recommendation consideration.) 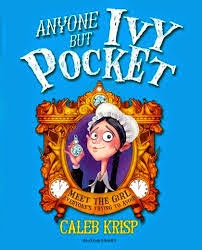 12-year-old maid Ivy Pocket is at a loose end after her employer the Countess Carbunkle leaves her for South America "for no other reason than it is far enough away from Paris to ensure that I never see you again." Charitably deciding that the old woman is 'bonkers' on the basis that anyone who doesn't see how wonderful she is couldn't possibly be in their right mind, Ivy thinks she'll stroll into another job but finds it more difficult than she'd expect - until the Duchess of Trinity gives her an important mission; to deliver a priceless diamond necklace to the granddaughter of an estranged friend. But what should be a simple task becomes fraught with danger as Ivy faces obnoxious aristocrats, strange creatures, and betrayal.

This is completely delightful - Ivy has an extremely strong voice and is a narrator you'll both warm to and laugh at. She's cheerfully full of confidence (somewhat misplaced at times) in her ability to see the job through, and while it's easy to see why nearly everyone she meets becomes incredibly irritated with her, I was still cheering for her to succeed. The plot is very interesting - a mixture of the completely obvious, inviting the reader to smile at Ivy's complete failure to recognise the clear clues she's missing about certain characters, and some neat twists which took me by surprise. There's a range of interesting supporting characters, both good and evil. I particularly liked Rebecca, who's still in mourning for her mother, and has become obsessed with clocks as a result of her death.


While Caleb Krisp's writing is the main draw here, it's aided by some truly gorgeous black and white illustrations from John Kelly, in the same style as his beautiful cover. These really add to the book, in the same way that Chris Riddell's stunning pictures added to Neil Gaiman's wonderful prose in The Sleeper and the Spindle, and Emily Gravett's illustrations perfectly complemented AF Harrold's story in The Imaginary. Bloomsbury are definitely the publishers to go to for brilliantly illustrated MG!


Massive recommendation; I'm told that we're getting more of Ivy's adventures in the future and I'll be eagerly anticipating them!
- April 03, 2015