Mini Recommendations - Spotlight on Sunny, All Fall Down, Black Hearts in Battersea 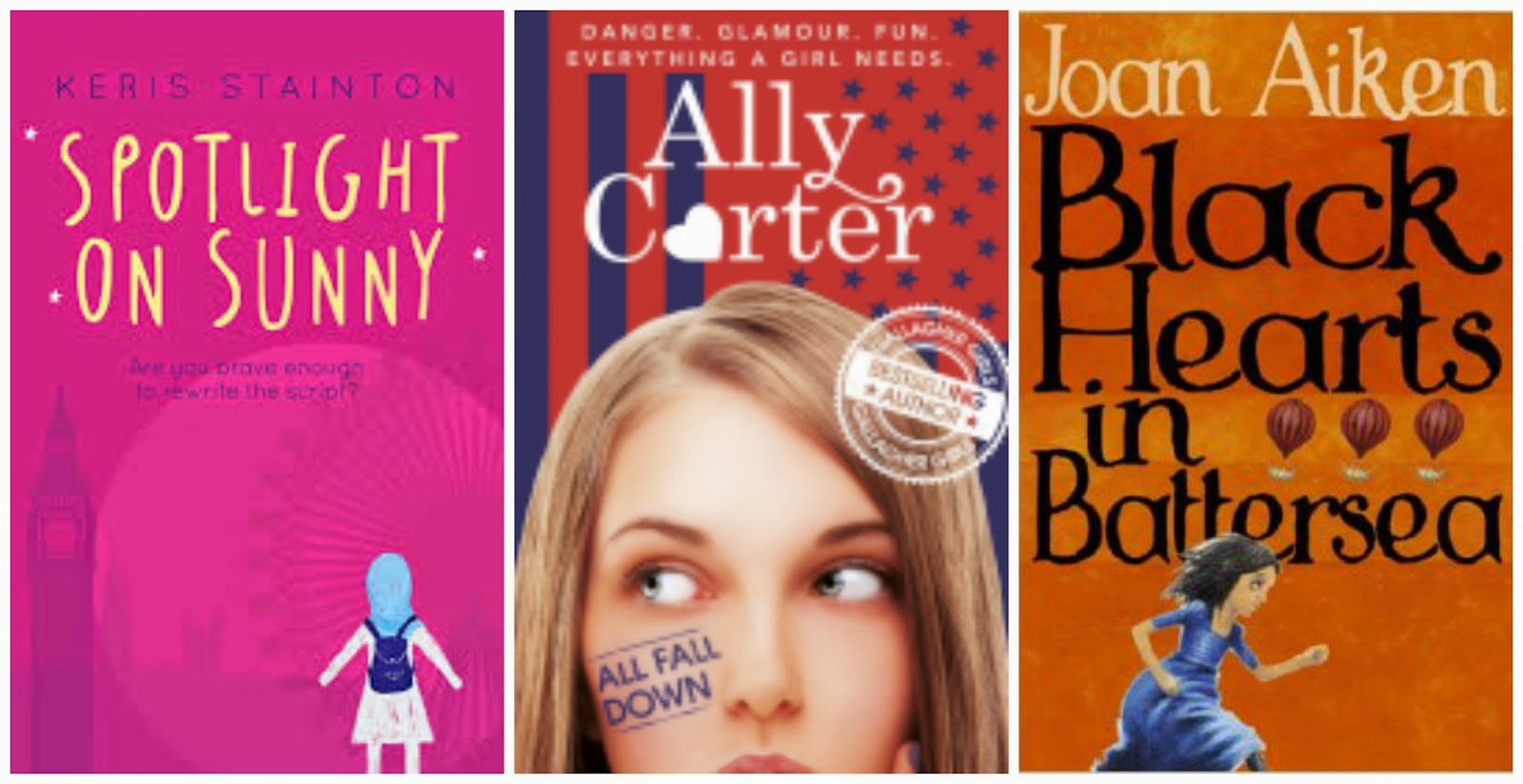 I read All Fall Down on NetGalley, and was sent a copy of Spotlight on Sunny by Catnip, in both cases for consideration for a recommendation. Thanks to the publishers!

Keris Stainton's Spotlight on Sunny is the second in her Reel Friends series, following on from last year's Starring Kitty, a favourite of mine. The first book was a sweet, tender romance about Kitty, who was in love with another girl, trying to navigate a relationship without at first feeling quite confident enough to come out to her friends. This sequel follows the same group of friends - Kitty, Sunny and Hannah - but shifts to Sunny's point of view, and moves the action to London, where the trio take part in a film-making course. Sunny is happy to be in London but has to keep a big secret from her friends, as well as doing the course and making a new friend in the lovely Will.

This is similar to Kitty in many ways - it's a really sweet, charming read. I particularly like the dynamic between the central trio, who are extremely close friends despite having very different values - Sunny is a Muslim and has massively different ideas about boys to Hannah, for example, but both characters' views are expressed well and non-judgmentally, and they respect each other despite their differences. I also thought Sunny's relationship with her parents was very well-portrayed. There's a wonderfully diverse cast, with wheelchair user Will being great to read about - charismatic and funny - and even someone who originally seems to be a slightly stereotypical bad girl shines towards the end as we see more of her character revealed. I also really loved the way Keris Stainton captured the thrill of exploring London when you're unfamiliar with it, the setting is brought to life brilliantly!

Ally Carter's All Fall Down, first in her new Embassy Row series, sounded like an intriguing read - I like what I've read of Heist Society and am a huge fan of her Gallagher Girls books. This new series, set in the fictional country of Adria, follows Grace, the granddaughter of the American ambassador to the country, as she moves in with him. Three years ago, she saw her mother murdered by a mysterious scarred man - but no-one believes this, claiming the death was an accident in a house fire. After seeing the scarred man again, she's determined to investigate, with the help of her friends.

In a lot of ways this is very good - Ally Carter always writes excellent action scenes, her character development is superb, and while I correctly predicted part of the central storyline, there's a stunning ending which took me by surprise. My only issues with it are that it takes a long time to get going - the pacing seems off, particularly early on - and the cliffhanger ending combines with this to make it feel more like a very strong set-up than a hugely satisfying read in its own right. That said, I'm now really looking forward to the next book. Chalk this one up as a good read that could become a great series, I'd say.


(Note: Black Hearts in Battersea is the sequel to The Wolves of Wiloughby Chase, but with only Simon reappearing, works perfectly well without you having read the first one. That said, you should still read the first one as it's brilliant!)

I re-read Black Hearts in Battersea recently, after author Julia Lee named Dido Twite as her favourite MG heroine in a Top Ten Tuesdaypost on MG Strikes Back - I'd been seriously considering her, but she was edged out by Stephanie Burgis's Kat Stephenson for me. Actually, the two characters are similar in many ways. They're both incredibly bold and brave, fiercely loyal to those they love, and willing to do anything to help them. While Kat has the advantage of a supportive family, Dido has a much worse-off start in life, the younger child in a family of Hanoverian plotters determined to overthrow the King. She'd go on to be the main character in this long series, but in her introduction here the street urchin has a supporting role to heroes Simon and Sophie - although she steals the scene every time she appears, with her fantastic language and the way she stands up for her friends even though she knows it will get her into trouble with her parents.

Simon, an orphan coming to London to look for his friend Doctor Field, and Sophie, his friend from the orphanage who's now a maid to the Duchess of Battersea, are a fantastic pair of heroes, while the Duke and Duchess of Battersea are adorable characters. As for the villains - wow! I generally prefer more subtle characterisation, but Aiken is one of the writers talented enough to just make her evil characters completely and utterly repelling, and absolutely captivating because of this - you'll spend the entire book desperate to see them get their comeuppance. As well as the great characters, it's an incredibly fast-paced read with lots of brilliant twists and turns.

I've never actually finished the series somehow - very strange considering how much I loved the first five or six books, and how many times I've reread this one - but am aiming to do so this year, and will try and review as I go!
- April 24, 2015