I loved Ivy Pocket when I read the proof - it's a fabulous story with a brilliant lead who you'll warm to but laugh at - but seeing John Kelly's illustrations made it an even better book. I'm delighted to have a guest post from him on the process of designing the cover! 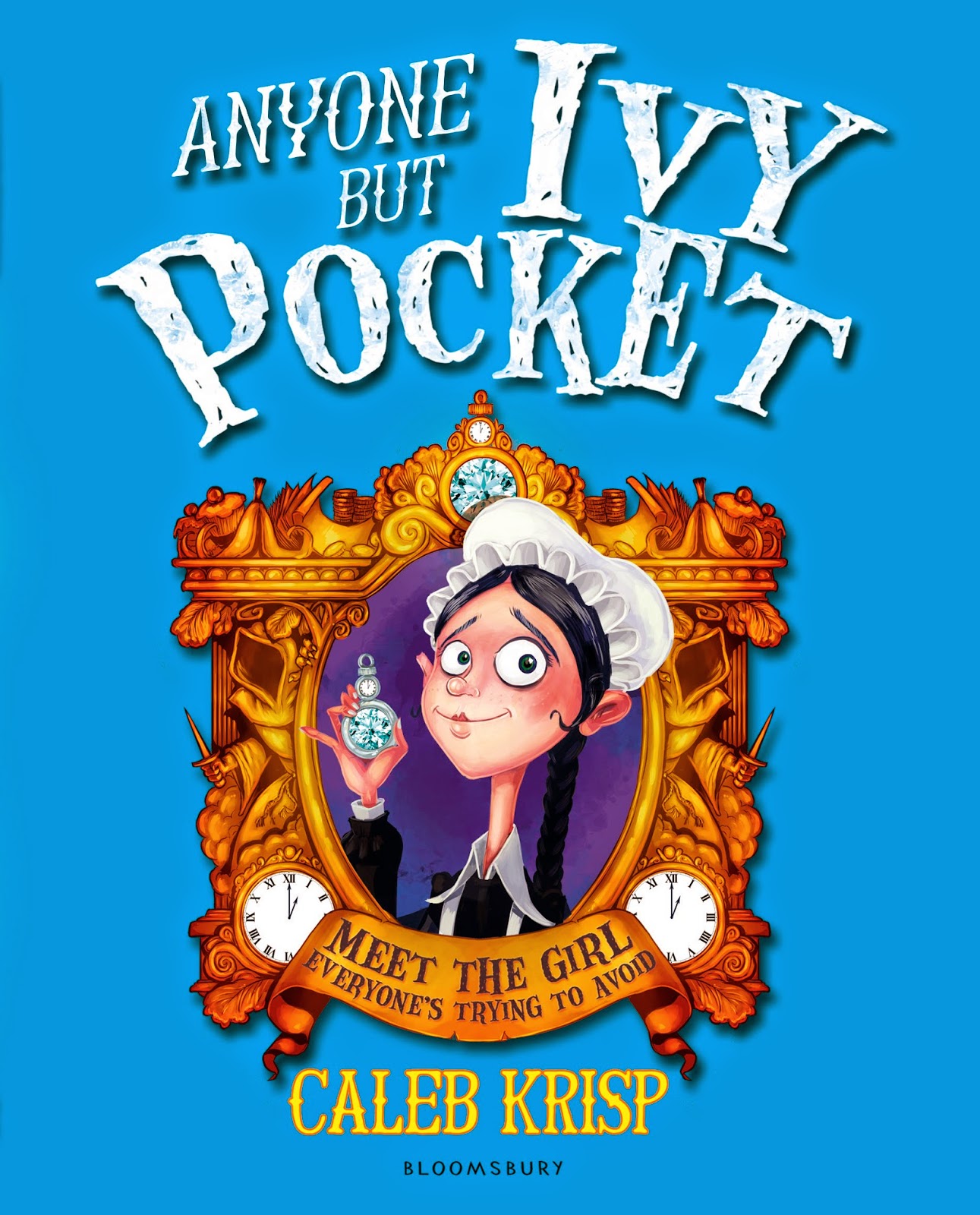 Ivy Pocket is an incredible character.

She’s certainly incredibly delusional, incredibly dangerous, and incredibly unaware of the chaos that she creates wherever she goes.

So the cover for her very own book needs to really try and get this essential ‘Ivy-ness’ across to the reader.

The publisher’s first idea was to have some kind of complicated slipcase. It’s calm exterior would flip open to reveal an Ivy-generated Victorian domestic chaos within.

Escaped monkeys were mentioned. I was excited.

Sadly this wasn’t practical (the slipcase not the monkeys). Instead I was asked to illustrate Ivy beaming out her serenely smug and delusional grin from the front cover. 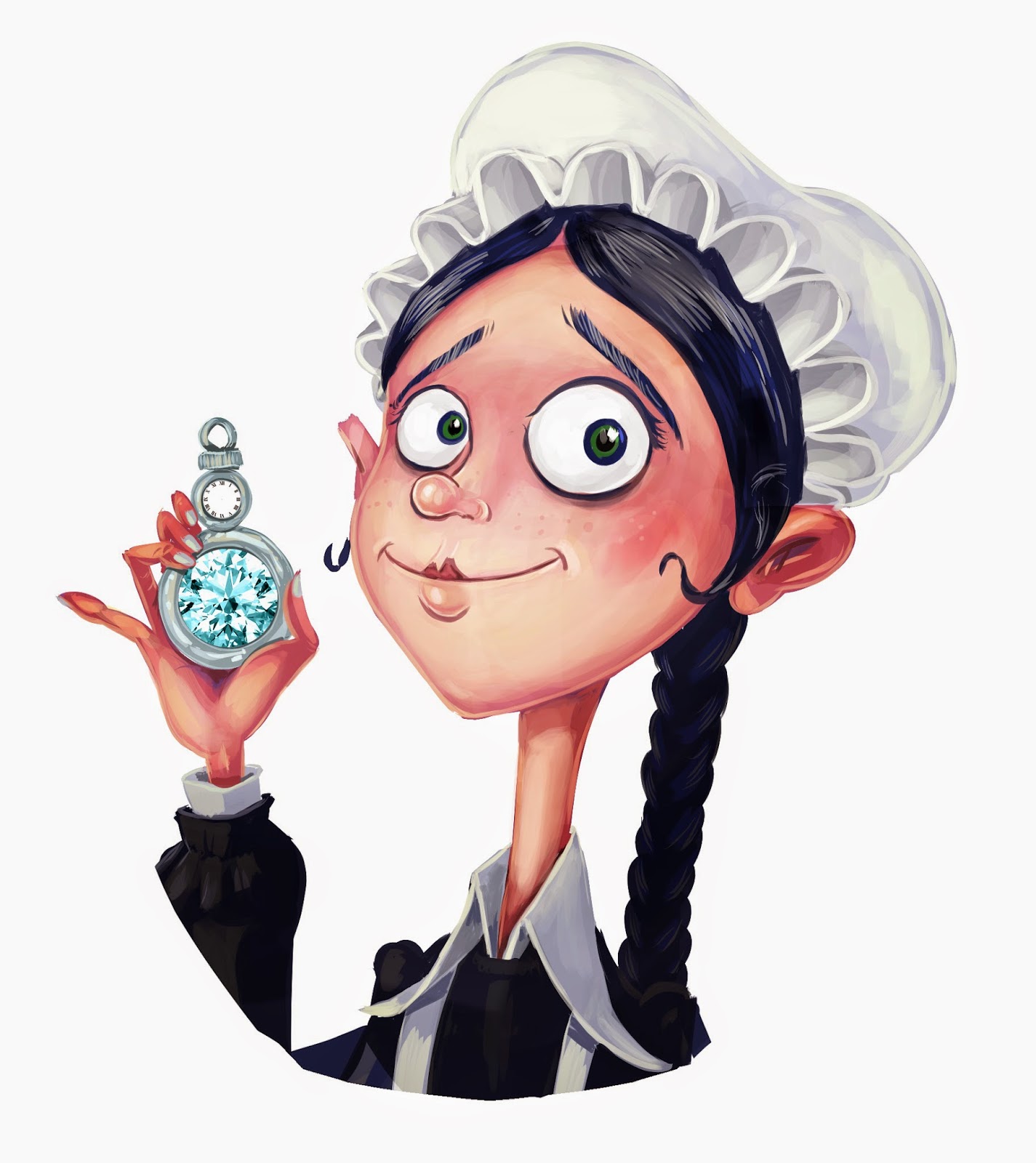 I designed a gilt frame to surround her. It illustrated certain key story elements; tiny hooded assassins, clouds of smoke, piles of cash, and a metaphorical banana skin to represent the effect Ivy has on the Universe. 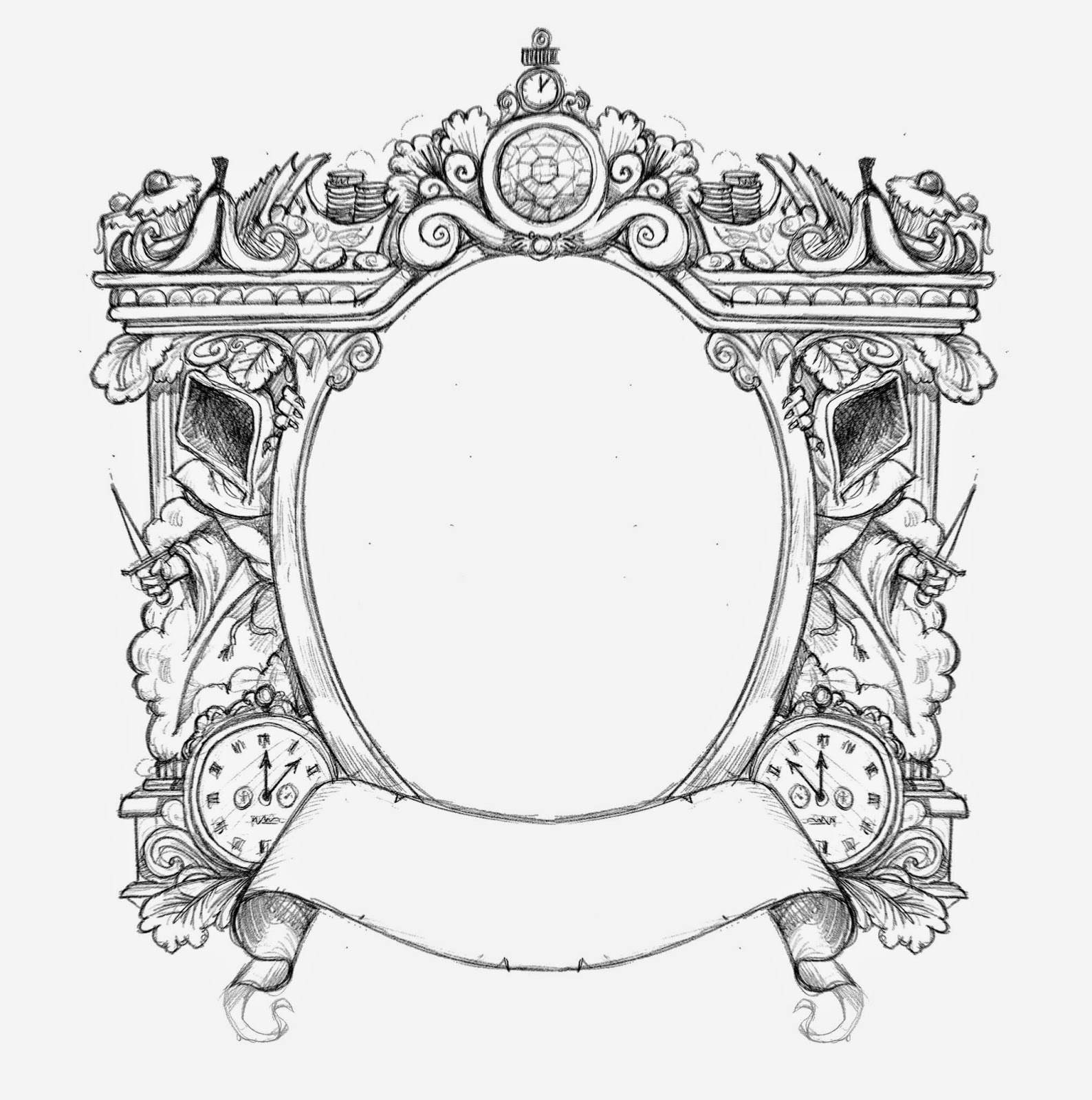 That left the back cover free to show a scene of the mad chaos Ivy has caused. In it everyone would be fleeing in terror from the living, breathing accident that is Ivy Pocket.

I loved drawing this.

A small boy in a sailor suit scrambles up the curtains, a spectacled governess flees, the cowardly vicar hides beneath the coffee table, an angry cat hisses from a footstool, and a gentleman throws himself out of the window to avoid meeting Ivy. 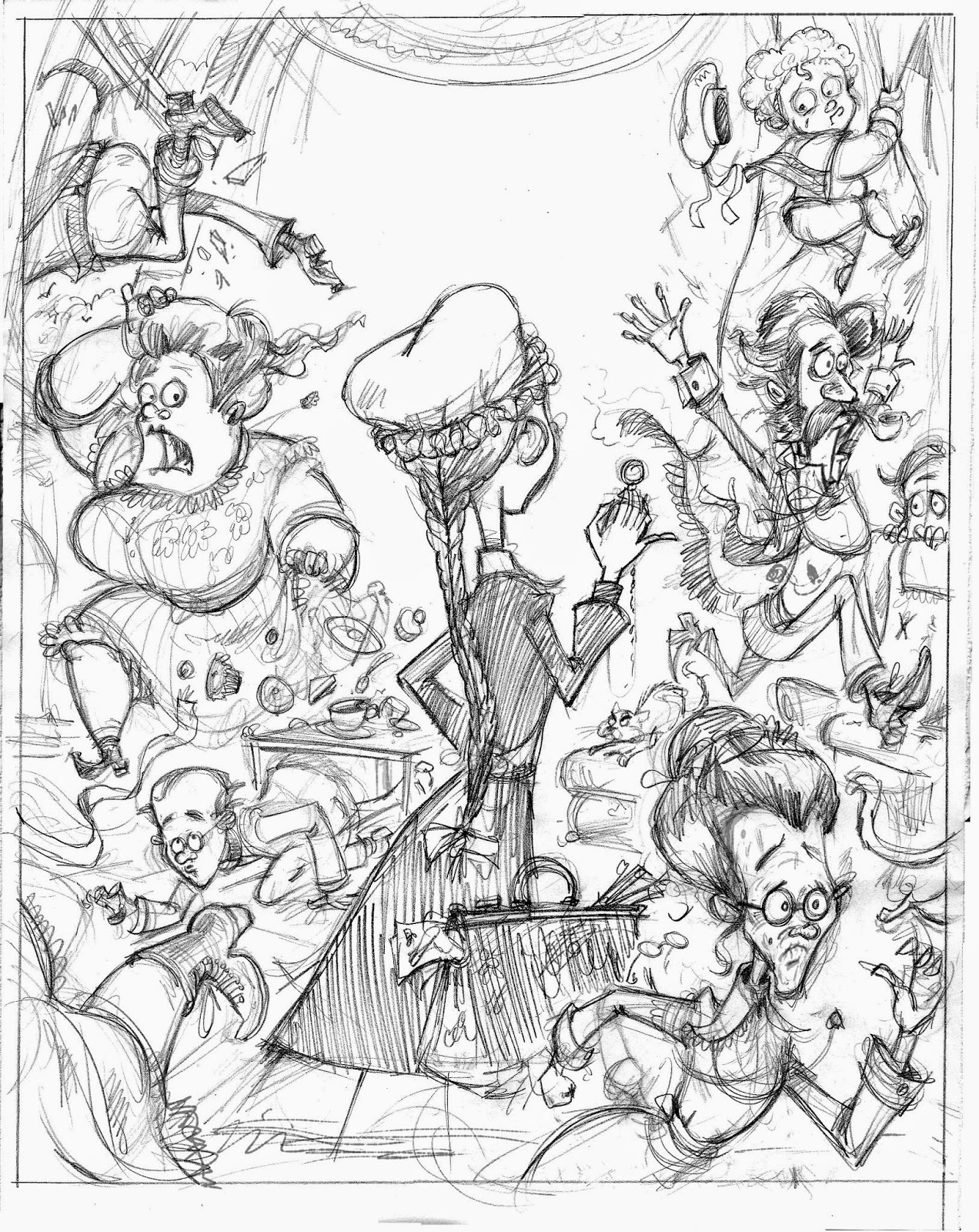 Unfortunately there were no escaped monkeys allowed.

Once approved (no changes, hurrah!) I illustrated it with the digital paint programs ArtRage and Adobe Photoshop. I swap between them as ArtRage has lovely direct painting brushes that simulate oil and Acrylic strokes, whereas I prefer Adobe Photoshop for lighting effects and adjusting colour.

When the finished art was submitted, Katie Everson the designer at Bloomsbury felt it wasn't quite ‘manic’ enough. Not enough mayhem and property damage for an ‘Ivy Pocket’ book. 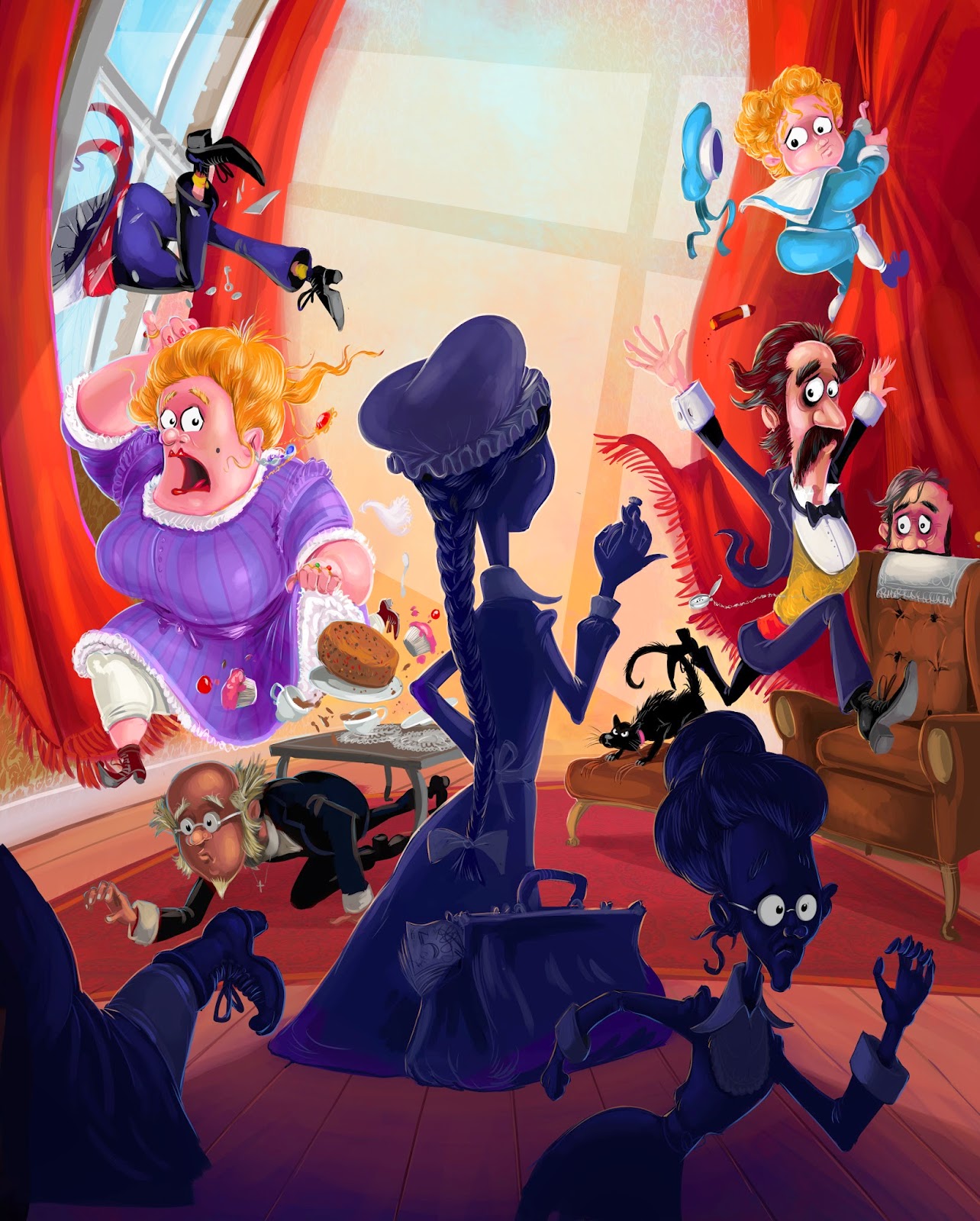 I do love Bloomsbury. They never say, “That’s too manic. You need to do less.”

So I went back and added fire, flood, but sadly no pestilence (unless the small boy has measles).

The final artwork has the roof caving in under a flood of water (Ivy probably left the bath running), the curtains are on fire (don’t ask), and there's a lot more shattered glass, smoke, and scattered tea things.

And an escaped dog. 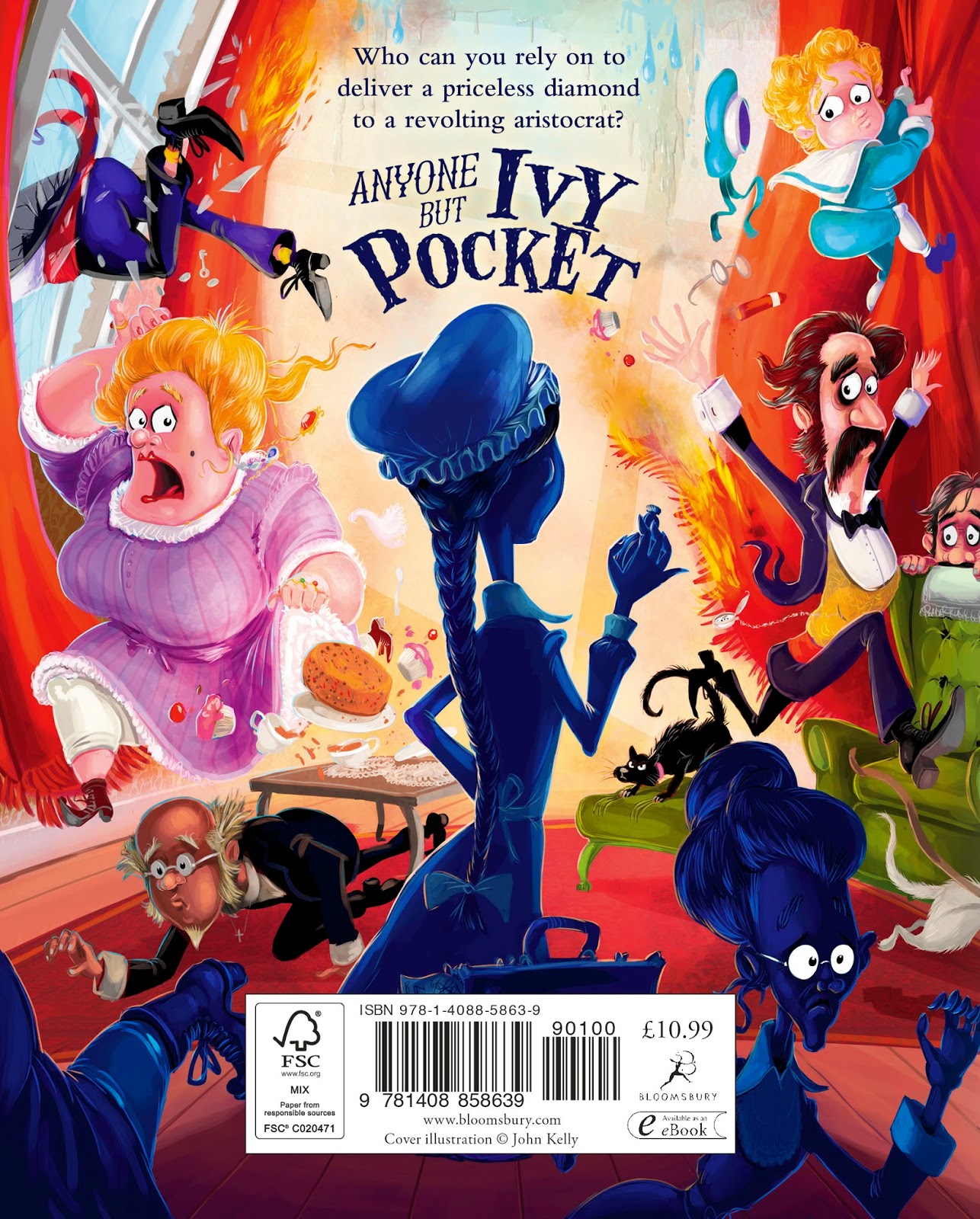 Still no monkeys though.