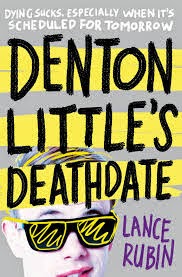 At first, my YA novel Denton Little’s Deathdate was written in the third-person. It didn’t feel quite right, though, so I quickly made the switch to the first-person and never looked back.

I’ve always loved a first-person narrator. It makes me feel like I’m hanging out with my most uninhibited friend. And if this friend is funny, I’m even more likely to keep reading.

Here, in no particular order, are my ten favorite funny first-person narrators. There are many other great ones I don’t have room for, and undoubtedly many more that I have yet to read, but this is a good place to start.

1. The Curious Incident of the Dog in the Night-time, by Mark Haddon

Christopher John Francis Boone, the 15-year-old autistic narrator of this book, lets the reader know right up top: “This will not be a funny book.” And yet, as Christopher tries to solve the mystery of his neighbor’s murdered dog, he’s often quite funny, his literal thought patterns hitting upon hilarious truths about the world. As readers, we’re never laughing at Christopher, though; Haddon helps us fully inhabit Christopher’s mind and come to understand the unique and inadvertently amusing way it operates.

With his dad in jail and his family in a homeless shelter, Tyrell’s had no choice but to develop a thick skin. As the reader, though, we know he’s way more vulnerable and big-hearted than he might let on, and his candid and astute observations about life made me laugh so much. His feelings about Novisha, his girlfriend, and Jasmine, a girl he meets at the homeless shelter, crackle with humor because they feel so embarrassingly true to how a teenage boy actually thinks. It’s easily one of the most authentic teen love triangles I’ve ever read.

3. Are You There God? It’s Me, Margaret, by Judy Blume

I finally read this last year, and I’m sorry I waited so long. Margaret Simon is such a relatable character—smart, honest, neurotic—and her experience of entering adolescence is as awkward as anybody’s, which is comforting. Not to mention funny. One of my favorite lines is Margaret’s description of her current crush: “It’s not so much that I like him as a person, God, but as a boy he’s very handsome.” A super read for girls and boys alike.

4. Me and Earl and the Dying Girl, by Jesse Andrews

“I have no idea how to write this stupid book.” So begins this laugh-out-loud-the-entire-time novel, narrated by the smart, sweet, and self-deprecating Greg Gaines. Whether he’s making bad movies with his funny, angry best friend Earl or being forced by his mom to get to know Rachel, a high school classmate who has cancer, I was always amused by Greg’s perspective on things. Which is why, by the end, it was even more of a gut punch when I found myself so moved.

5. The Absolutely True Diary of a Part-Time Indian, by Sherman Alexie, art by Ellen Forney

6. Better Nate than Ever, by Tim Federle

Nate Foster is another endlessly lovable underdog, a Broadway-obsessed outsider in his (perfectly-named) town of Jankburg, Pennsylvania who takes a secret journey to New York City to audition for E.T.: The Musical. Nate’s genuine wit sparkles on every page (regarding a shady stranger: “For a moment I wonder what the best way will be to make myself throw up on him when he tries to kill me”), and it’s beyond heartwarming to experience his discovery of a world where he finally feels like he belongs.

7. The Wrong Side of Right, by Jenn Marie Thorne

Less than a year after Kate Quinn’s mother passes away, she learns the father she never met is the Republican candidate for U.S. President. Kate ends up joining him on the campaign trail, and her wry, very human reactions to this crazy, high-stakes situation (regarding her yearbook photo being used on the news: “Because there I was, looking half homeless, dirty hair thrown into a ponytail, dead eyes, splotchy skin, strained smile. On national television.”) are what make this book such a satisfying read.

This wholly original book is about six-foot-tall praying mantises that wreak havoc on an Iowa town. But narrator Austin Szerba’s unique way of documenting such a strange history—drily referring to people as “real dynamos,” for example, as he simultaneously grapples with his own sexual confusion (he may or may not be falling in love with his best friend Robbie)--grounds the insanity, elicits the laughs, and elevates this book to classic status.

9. Simon Vs. The Homo Sapiens Agenda, by Becky Albertalli

A mere five pages into this book, I already felt like Simon Spier was my best friend. He’s smart, self-aware, droll, and kind, and we get to know him further through his emails to Blue, the guy whose identity he doesn’t know even though they’ve been courting each other for months. Both Simon and Blue are not out of the closet, so when a classmate sees Simon’s emails and threatens to reveal his secret to the school, everything quickly unravels. All the characters feel completely real, but especially Simon, who charms from cover to cover.

To say this book was ahead of its time is an understatement, as you can trace the current crop of voice-driven contemporary YA right back to it. I remember laughing out loud during study hall as Holden Caulfield describes his encounter with his teacher Mr. Spencer. (“Old guys’ legs, at beaches and places, always look so white and unhairy.”)  Somehow, sixty-four years after the book was first published, Holden’s voice still feels relevant and cathartic. Seeing as there will always be plenty of phonies in the world, I’m sure it will continue to be.

Great list, Lance! Particularly agreeing with Me and Earl, Simon vs, and Better Nate, three favourites of mine - and will definitely check out some of the ones there I haven't read. You can follow Lance on Twitter and Tumblr.
- April 23, 2015