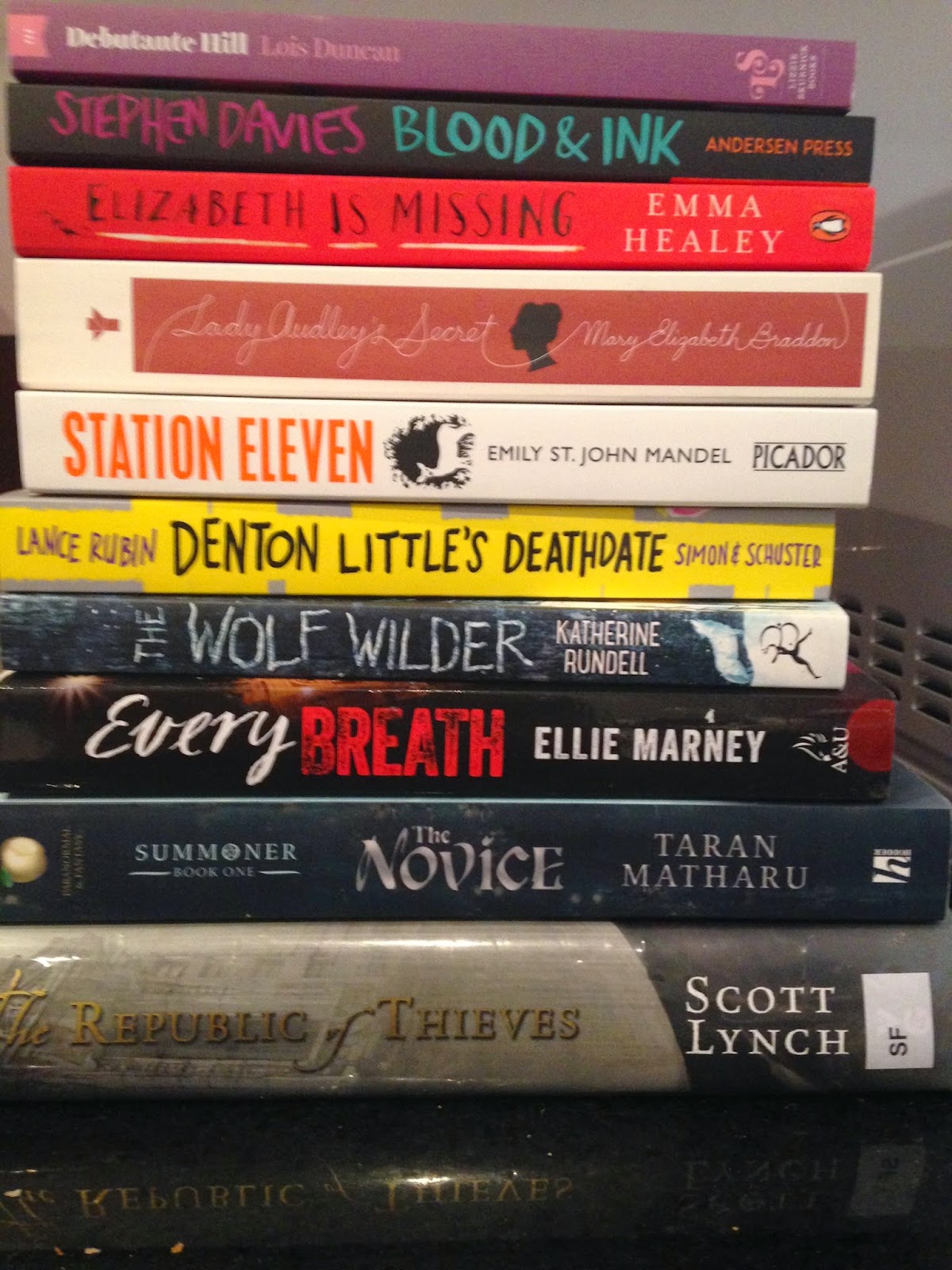 The Republic of Thieves by Scott Lynch - I've been saving the final part of the Locke Lamora trilogy for a couple of weeks but it's due back to the library soon, so should really get around to it. In fairness, after the stunning ending to book two, Red Seas Under Red Skies, I'm desperate to know what happens next - but I will be extremely sad to come to the end of Lamora's story as he's one of my favourite heroes for a long time!

The Summoner by Taran Matharu - I know Taran and was super-excited to get this but Leah and Debbie were so desperate to read that I lent to them before I had a chance to start myself. Hearing lots of good things about it so it is very near the top of my list!

Every Breath by Ellie Marney - I've been waiting this Sherlock Holmes-inspired YA contemporary for AGES so when it finally made it over here I was thrilled! Ellie is lovely and I've heard lots of great reviews of this one.

The Wolf Wilder by Katherine Rundell - there was a brief moment at Prosecco YA when I was holding both this AND Remix by Non Pratt, which I was about to lend to Charlie. Given how highly coveted both are, I was genuinely worried someone would rob me. (Especially as I was sitting next to David Maybury...)

Station Eleven by Emily St John Mantel - staggering praise from everyone I know who's read this, with Kate from Adventures With Words being a particularly big fan. It sounds amazing!

Lady Audley's Secret by Mary Elizabeth Braddon - I read about this in the Gothic exhibition I went to with Stacey and Debbie a while ago then found in half price in the London Review Bookshop later that day - clearly fate! It's probably going to be my March read for the 2015 Classics Challenge.

Elizabeth Is Missing by Emma Healey - This is our book club's read for next month! Hugely looking forward to it after really enjoying hearing Emma reading from it last year at a Penguin bloggers' event.

Blood & Ink by Stephen Davies - Set in Timbuktu after its capture in 2012, Charlie from Andersen made this sound completely fascinating when talking about it at the recent libraries unconference.

Debutante Hill by Lois Duncan - My first book from Lizzie Skurnick Books, who are reprinting some classics from the last century. This sounds very interesting and I was really glad to pick it up in the buy one get one half price that Waterstones High Street Kensington generously offered on YA and sci-fi/fantasy at the recent UKYA blogger awards.