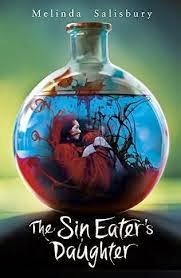 I am a massive fan of The Sin Eater's Daughter, out today from Scholastic, and its amazing author, my friend Melinda Salisbury, so I was thrilled when she agreed to take part in an interview. She did state that she didn't want any boring questions. Please bear that in mind when reading!

Ha! I would snog Voldemort. I would marry Macbeth. And I would kill Henry VIII. I wouldn’t want to marry Voldemort, but I wouldn’t be able to kill him because there is no way I’m spending six months camping to be able to find the horcruxes. So he’d get the liplock. I’d marry Macbeth, because we all know he’s weak and easily led. So I’d marry him and then get him to do all the shopping and cleaning whilst I read and planned holidays. And I’d kill Henners. Because he’s the worst. He is such an awful man. No love for the Tudors here.


2. If they made an action figure of you, what accessories would it come with? (Thanks to ShinraAlpha for the brilliant question!)

A flask of tea, a bottle of wine, my e-reader, a bow and arrow, a set of lock picks, mascara, silver Doc Martens, a passport, ceramic door knobs, a map of the world. It would come with a lot of accessories.

As much as I liked, but no animal pictures. I’d have to find another way to express joy and rage. Maybe I could use photos of myself. PHOTOS OF MYSELF DRESSED AS ANIMALS. Ha, take that.


4. If your agent, Claire Wilson, could travel back in time and stop Twitter from being invented, do you think she would?

No! Despite the fact I think we often worry her with some of our escapades, I think she secretly loves it. No matter what she says. Even if she says she’d like to travel back in time and stop Twitter being invented. She’d be joking. Even if she said she wasn’t joking. It’d be like a double bluff. She’s tricksy, like that.


5. You've been asked to lead a team of authors to take down a major threat to the world. Which other three members of Claire's Coven would you take with you, and which non-coven member would you ask to join you?

Alexia Casale. Definitely. She’s small, but deadly and can be ruthless, but compassionate. Cat Doyle, because she’s kooky and thinks outside of the box. I’d be torn between Katherine Rundell – who is a fearless genius, and Tanya Byrne – who is just boss-level fierce. In fact, that’s how I’d do this. I’d be Nick Fury and they’d be my Avengers – I’d send the four of them off to execute my plan. I’d also send J.K. Rowling, because everyone loves her and I feel the threat would be so busy flailing at her my team could easily take them down in the meantime.


6. One of my favourite things about the Sin Eater’s Daughter was the wonderful love triangle. If you could cut down your myriad of admirers to just two people to fall helplessly in love with you, who would you choose?

THIS IS A VERY CRUEL QUESTION. Currently (I am very very flighty and my affections wax and wane like the moon) I mostly fancy Ryan Gage and Aidan Turner. I have a very specific type – dark wavy hair and dark eyes. My friends can pick out someone that I’ll fancy at ten paces. So it’s those two right now. It’ll probably change by tomorrow. Also, two seems a bit stingy. There are seven days in a week, after all.

I didn’t include Jeff because he’s already hopelessly in love with me. Obviously.


7. What was the most interesting/worrying thing you Googled last month?

It’s a toss-up between pictures of broken bones where the bone has broken the skin, and how would you remove an arrow from a person.


8. There are lots of fab debuts coming out this year! Other than your own, which are you most looking forward to?

Two of my most wanted UKYA debuts have come out already: Catherine Doyle’s Vendetta and Lisa Williamson’s The Art of Being Normal. I’m deeply excited for Dawn Kurtagich’s The Dead House, Lauren James’s The Next Together, Eve Ainsworth’s Seven Days – there are so many. Don’t get me started on non-debuts, or non-UK books. It feels as though the quality of all books is rising every year, every year I’m reading more and more exciting, captivating novels.


Melinda Salisbury probably has an official bio but a) I don't think there is any way it could capture her brilliance sufficiently and b) I've just realised I forgot to ask for it. She is one of the most awesome people in the world of YA books (which, let's face it, is hardly short of amazing people!) and she's massively supportive of her many friends - I'm hugely glad to be one of them. If you're not following her on Twitter, then you clearly either didn't read or ignored my Twenty Authors You Should Be Following On Twitter post - good grief! Catch her on @AHintOfMystery or on her website.
- February 04, 2015