I somehow haven't got round to reviewing AJ Grainger's Captive yet - I'll hopefully get it on the Bookbag later this week - but I found it an enjoyable, tense thriller, and loved central character Robyn and her potential love interest. I was delighted to get the chance to ask AJ some questions about the book.

Probably the modern version of me at twelve/thirteen/fourteen. I was a big reader and flitted between genres. Some teen books (Judy Blume, Point Horrors), some classics (Jane Eyre, Pride and Prejudice) and some books 'borrowed' from my mum's bookshelves (Jilly Cooper's Riders, Virginia Andrews' Flowers in the Attic).


2. Captive sees Robyn start to potentially fall for one of her captors – a tricky topic! How much research did you do into Stockholm Syndrome?

It is a fascinating topic and I have read quite a bit about it. The first known example was in Stockholm in the seventies, when four women were taken hostage by Jan-Erik Olsson and another man. Patty Hearst is probably the most famous sufferer, though. She was nineteen years old when she was kidnapped by the Symbionese Liberation Army. She ended up robbing a bank with them. Her story really intrigued me, so I read her autobiography. She served time in prison for robbing the bank, but it was later determined that she had been brainwashed at the time. The question over whether Robyn does actually experience Stockholm syndrome is left open in my novel, because I want readers to draw their own conclusions.


3. As well as being an author, you have a job as an editor at Walker Books. How has being an editor helped you with your own writing?

Being a writer and an editor of other people's work is very different, so in some ways it hasn't helped me at all! You can't edit your own work in the way another person with distance and perspective would. I found this hard to accept at first and kept getting frustrated with myself for not noticing plot holes in the script sooner. But with Captive, I am not an editor; I am the author. As an author, you are holding onto so many plot strands and characters in your head that, of course, you are going to miss some things. That took a while for me to accept, though.


4. On a similar note, in your role as an editor you’ve presumably seen lots of authors start their career. Has this experience meant you’ve been completely prepared for everything so far in your writing career, or has there been anything about preparing to be published that’s still taken you by surprise?

It meant I thought I knew everything! How nervous I am getting around pub day has taken me by surprise. It is also amazing how vulnerable you feel when you realize people are going to read your book. That may sound silly − but most authors I have spoken to feel the same way. The good thing about being an editor first, though, was that I knew what to expect from the publishing process, so most practical things (editorial comments, copyedits, marketing etc.) didn’t come as too much of a surprise.


5. There seems to have been a massive upsurge in the amount of UKYA books being released recently. Do you think that’s true, or am I just noticing them more? If it is true, what would you say were the main reasons for the increase?

There certainly does seem to be a greater interest in books for this age group at the moment, which is terrific. It is such a vibrant and exciting area of fiction, and there are so many new writers coming through. The cynical part of me thinks the growth is because companies (publishers and film companies etc.) have spotted a lucrative new market, thanks to the likes of John Green, Suzanne Collins and Stephenie Meyer. However, the editor/reader in me is happy because this means that YA benefits from more attention and more competition. YA fiction used to be the terrain of American writers, but authors like Marcus Sedgwick, David Almond, Louise O’Neill and Malorie Blackman (among many others!) prove British and Irish authors can do it too. I was thrilled when The Bookseller launched a UK-only YA book prize. I hope the popularity of YA literature (both British and American) continues to grow.


6. Other than your own book, are there any other debuts you’re particularly anticipating this year?

Like almost everyone else, I am really looking forward to Lisa Williamson’s The Art of Being Normal. It was out in January, but I haven't read it yet. Something I must rectify quickly! I am also excited about The Sin Eater's Daughter by Melinda Salisbury and The Conspiracy of Us by Maggie Hall as well as all of the debuts on the Walker fiction list (of course!), including Lauren James’s The Next Together and Drop by Katie Everson. Oh, and I can’t wait to read The Serpent Papers by Jessica Cornwell. I love a good thriller and Cornwell’s promises to be just that.


7. Like me, you’re a big fan of dance. What recent YA book would you most like to see adapted for the stage?

Ooh, great question! Can I say Zoë Marriott's Shadows on the Moon even though I edited it? It is an extraordinary book. Set in a mythical feudal Japan, it is Cinderella meets Memoirs of a Geisha with a twist of The Count of Monte Cristo. Zoë's descriptions of the costumes and landscape are so vivid; I think it would make a gorgeous ballet.

Half Bad by Sally Green could also make an interesting contemporary dance.

Lord Asriel from His Dark Materials by Philip Pullman. A great character − one whose ambition is on a direct collision course with his role as a father. Kind of like Robyn's dad in Captive...


9. Robyn is a keen photographer in Captive, and you were kind enough to provide me with some great photos for a blog post last month. What’s the most memorable photo you’ve ever taken?

Now is time for a confession... I am a terrible photographer! My husband helped me take those photos. I get really impatient lining up shots, so I end up snapping pictures with someone's head missing or something. I love looking at other people's photos, though. My favourite snap is of the Hong Kong skyline at night. My husband took it during our honeymoon last year.

I am doing a mini-tour to celebrate the publication of Captive, including school visits, and a public signing at Waterstones in my hometown of Reading, Berkshire, on 31 January. (All are welcome to the book signing. It starts at midday. More info can be found on my website.) I am also working on a second book − another fast-paced YA novel. And I am still working as commissioning editor at Walker. We've got some really terrific books coming out this year. All very exciting!

Thank you for a brilliant interview, AJ!

A. J. Grainger lives in London, where she works as a children’s books editor. Her first novel, Captive, was named ‘One to Watch’ by The Bookseller and was listed as one of The Telegraph’s best YA books of 2015. She is currently working on a second book. To find out more about A. J. and her writing, find her on Twitter (@_AJGrainger) and Facebook. Her website is at www.AJGrainger.com. 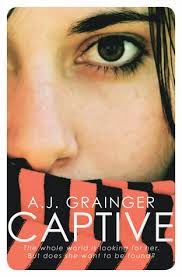 Robyn Knollys-Green is an A-list celebrity, famous for being the daughter of one of the world's most powerful men. But not even the paparazzi can find her now. Robyn begins to realise that she is trapped in a complicated web of global corruption and deceit − and that the strange, melancholy boy who has been tasked with guarding her might not be an enemy after all... A thrilling, well-crafted, ever-relevant story from a talented new voice in YA fiction.
- February 01, 2015