Top Ten Tuesday: Books I Meant To Read In 2014 But Didn't

Today's 'Books I Didn't Get Around To Reading in 2014' is a really timely topic - over at Bookish Peeps, we recently announced the Bookish Peeps Book of 2014 vote, where we're asking forum members to vote for their favourite books released in the UK. I'd love it if people joined in the conversation there! 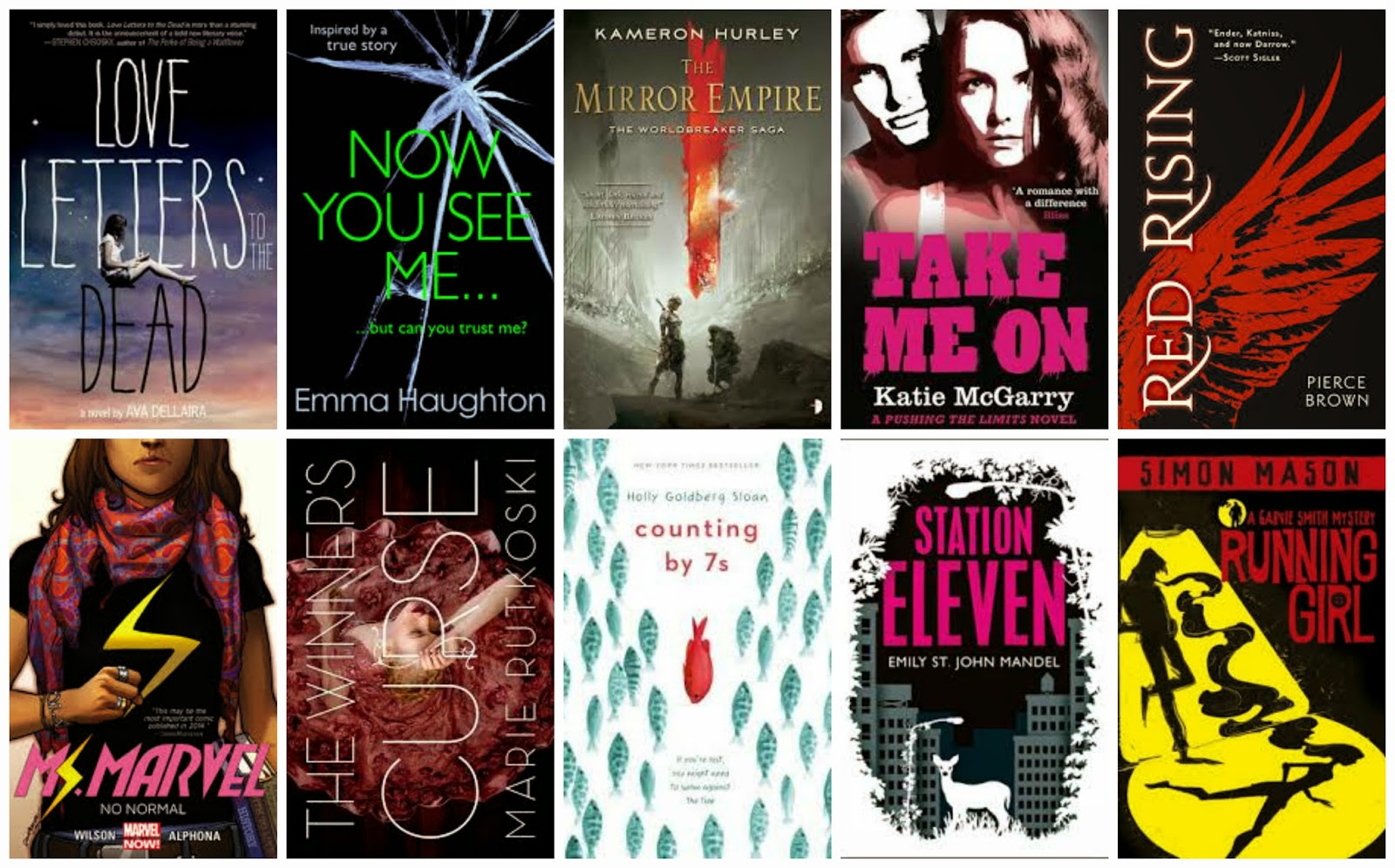 1. Station Eleven by Emily St John Mandel – I rarely enjoy dystopian or post-apocalyptic books that much, but there’ve been a few exceptions in the last year – notably Kim Curran’s excellent near-future dystopian Glaze and Allan Boroughs’ superb post-apocalyptic MG series, Ironheart and Bloodstone. Station Eleven is a near-future literary novel set twenty years after a pandemic wipes out 99% of the world’s population. It follows the Traveling Symphony, who roam around performing Shakespeare to small settlements which has sprung up in the aftermath of this tragedy. It’s definitely not my usual sort of read but I bought it because there’ve been too many amazing reviews to resist it, and because Chloe in Dulwich loved it so much that her enthusiasm was infectious.

2. Ms Marvel v1: No Normal by G Willow Wilson and Jacob Wyatt - I don't buy many single issues of comics, generally waiting for the trade, but grabbed issue one when it first came out because of the number of people on Twitter I follow who were really excited about it. I somehow then completely lost track of it, despite having enjoyed the first issue a lot, until Daphne reminded me about it and lent it to me.

3. Red Rising by Pierce Brown - I love Daphne's "Camp Half-Blood meets Battle Royale" comparison here; this sounds awesome! (Can you see a pattern in these recommendations?) Again, Chloe was also really talking this up.

4. Take Me On by Katie McGarry - I am such a huge Katie McGarry fan that I have no idea how I haven't got round to this yet, it looks amazing!

5. The Winner's Curse by Marie Rutkoski - I borrowed this from Daphne ages ago and shamefully still haven't got around to reading it despite her repeatedly telling me how brilliant it was. Given her recommendation of A Darker Shade of Magic by VE Schwab was PERFECT, I should really get on this.

6. The Mirror Empire by Kameron Hurley - Note to authors trying to sell their books on Twitter; the best way to do it is to stop trying to sell your books on Twitter. I took a look at the Mirror Empire because Kameron Hurley's tweets are engaging and interesting, which led me to check out her book. Numerous glowing reviews then swung me towards buying it.

7. Now You See Me by Emma Haughton - I picked this up on Kindle after seeing it described as 'gripping' by Debbie, who probably has closer tastes to me than any other blogger I know. I quite often forget to actually read stuff on Kindle, though, so I was really pleased to get a paperback in my goody bag at last night's #DrinkYA.

8. Counting by 7s by Holly Goldberg Sloan - Jen at Tales on Moon Lane did an amazing job of selling this to Erica a few months ago when I bumped into her there, but Zoe at The Bookbag also loved it.

9. Love Letters to the Dead by Ava Dellaira - This has been urged onto me by lots of people, particularly Faye from A Daydreamer's Thoughts. It sounds incredible but also sounds really intense, so I'm waiting to be in the right frame of mind before reading.

10. Running Girl by Simon Mason - This thriller about an underperforming genius schoolboy trying to solve the mystery of his ex-girlfriend's death sounds excellent, getting a really positive review from Jill over at The Bookbag. That was enough to make me buy it just after release date - I just haven't got around to reading it yet.

Any there that you'd particularly recommend I get to before making my final list?