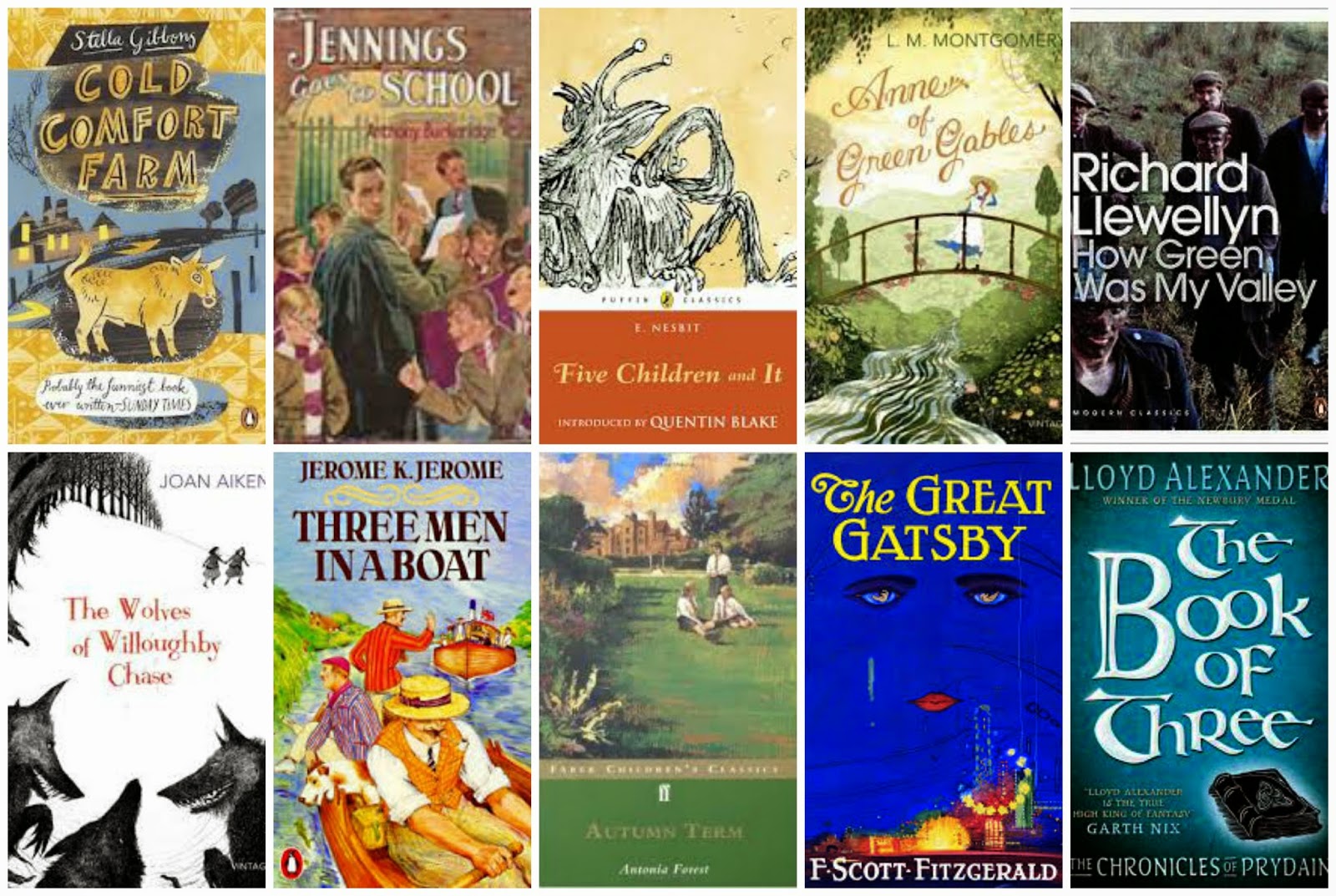 I'm taking part in this year's Classics Challenge, which my friend Stacey runs over at her brilliant blog The Pretty Books. With this in mind, I thought I'd use the 'freebie' week of Top Ten Tuesday to recommend ten of my own favourite classic books and series.

(Classics can be defined however you want them to be for the purposes of the challenge; I've gone for books which are more than 50 years or so old.)

The Chronicles of Prydain by Lloyd Alexander

While Susan Cooper’s The Dark Is Rising is one I still hear people talking about a lot, Alexander’s Prydain series is less commonly discussed. Like Cooper’s books, this is heavily influenced by Welsh mythology, but it’s set in a different world to our own – the titular Prydain. For me, it’s the greatest children’s fantasy series ever written – it follows the fortunes of hero Taran, who starts off as an assistant pig-keeper with dreams of being a hero, but matures wonderfully over the course of the five books as he’s plunged into a series of adventures to try and stop the Death-Lord Arawn. I love the complex characters, with so many strengths, weaknesses, and failings, while the last book is incredibly emotional.

Brought back to Matthew Cuthbert’s Avonlea farmhouse to live with him and his sister Marilla, who were expecting a boy to help them run the farm, red-headed Anne is expecting to be sent straight back to the orphanage but quickly wins over the siblings. This book, first in a series, follows her through her coming of age years.

I finally read this last year after Stacey’s fab guest post persuaded me to and fell utterly in love with it – it’s a brilliant read with a fantastic heroine and so many quotable lines!


Five Children and It by E Nesbit

On holiday, five siblings find a gravel-pit in which there lives a strange creature called the Psammead. Grumpy and vain, the creature doesn’t take too kindly to being disturbed, but has a remarkable power to grant wishes. Through numerous adventures, the children come to learn the truth of the saying “Be careful what you wish for.”

I’ve just reread for the first time in 15-20 years, after adoring the Costa-winning Five Children On The Western Front by Kate Saunders, and really enjoyed it. It’s my favourite Nesbit – although I also love The Story of the Treasure Seekers and The Railway Children, amongst others – and it feels fresh and funny, even now.

Starting with the Wolves of Willoughby Chase, and continuing for another 11 books, this is a stunning series set in an alternate version of 1830s England ruled by James III. I've actually only read about half of them, somehow, but Black Hearts in Battersea, Nightbirds on Nantucket, and The Stolen Lake, in particular, are three of my favourites of all-time, and the heroine of these, and others, Dido Twite is probably the only serious rival to Kat Stephenson when it comes to talking about my favourite ever main characters in series. Aiken's plots are glorious - Dickensian tales of villainy and dark plots, with added legends - but it's Dido, a young tomboy who quickly won my heart as a child, and the various people she comes up against, all truly horrible in their evil ways, which make this a really outstanding sequence.

This school story is the only book currently in print of Forrest's Marlows sequence (which puts it one ahead of my other favourite Girls Own books, the Drina series by Jean Estoril, Elinor M Brent-Dyer's Chalet School books, and Elsie J Oxenham's Abbey Girls!) I read it fairly recently and was worried it wouldn't live up to my high expectations but it's a glorious read. Central characters Nicola and Lawrie are likeable, but flawed, heroines, while there's more characterisation for some others - especially 'bad girl' Lois Sanger - than I would have expected. I would LOVE someone to reprint the rest of the series, if anyone in a position to do so is reading this!

Another set of school stories, the adventures of the reckless title character and his timid friend Darbishire at Linbury Court, where they constantly try the patience of masters Mr Carter and Old Wilkie - the latter of whom doesn't have much patience at the best of times - are childhood favourites from when my dad used to read them to me. Still wonderfully funny after all these years! (And an inspiration to an author who'll be guest posting on here on Thursday...)

How Green Was My Valley - Richard Llewellyn

This 1939 novel about a Welsh coal mining community in the time of Queen Victoria is an outstanding read - a brilliant story of love, family, and the valleys, wonderfully written with lyrical language.

Narrator J, his friends George and Harris, and dog Montmorency take an entertaining trip along the Thames. This was originally meant to be a serious travel guide, but Jerome’s witty asides and the humorous elements kept taking over the book. It’s one of the funniest I’ve ever read, and is possibly my most reread book ever – it’s definitely up there with Gatsby in double figures. A huge amount of laughs, which doesn’t seem to have dated at all in the 125 years or so since it was first published.

Orphaned at 19, Flora Poste – a London sophisticate – is led to retreat to deepest Sussex to live off her relatives the Starkadders at the aptly named Cold Comfort Farm, a mournful bunch who take her in as they couldn't refuse anything of Robert Poste's child, but seem less than happy with having to do so. As she meets the preacher Amos, his over-sexed younger son Seth, his flighty sister Elphine, and the hugely memorable – if barely seen – Aunt Ada Doom, the first person in literature to see something nasty in the woodshed – she resolves to take the family in hand and solve their problems.

I ignored this for years because I wasn’t sure if I’d like the novel from the plot summaries I’d seen, but if I’d realised how incredibly funny it was I’d have got to it a couple of decades sooner, I’m sure! Gibbons brilliantly parodies authors like Mary Webb and DH Lawrence – although you don’t need to be too familiar with them to enjoy the fantastic humour here; her deliberately impenetrable language and wonderfully memorable characters make this a superb read.

Narrator Nick Carraway takes a job in New York selling bonds, and moves to live in a small house on Long Island. He meets his next door neighbour, the mysteriously wealthy Jay Gatsby, and befriends him, becoming embroiled in Gatsby’s romantic feelings for Nick’s cousin Daisy. This brings the Roaring Twenties wonderfully to life and is stunningly lyrical, while the tragic plot – a story of the American Dream gone wrong – is perfect.

It also has probably my two favourite sentences in the history of literature, the closing one and this one below, which sends shivers down my spine just reading it as it brings back so many memories of the novel.

“No — Gatsby turned out all right at the end; it is what preyed on Gatsby, what foul dust floated in the wake of his dreams that temporarily closed out my interest in the abortive sorrows and short-winded elations of men.
- January 19, 2015