Recommendation: Emily Sparkes and the Friendship Fiasco by Ruth Fitzgerald

(Huge thanks to Little Brown, Kids for my copy of this book!) 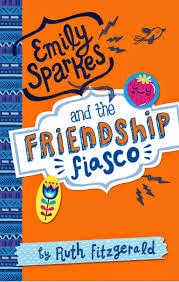 When it comes to books for the younger age range, I tend to be more interested in the adventure stories, the fantasies, and the mysteries than the more realistic contemporary books. Occasionally, though, something in that genre comes along which completely captivates me - and Ruth Fitzgerald's debut is one of those books. I picked it up to take a quick look after it was recommended to me as being a perfect 'mood-buster', and within 5 pages I was enchanted. (I was also attracting some strange looks on the Tube, having burst out laughing loudly three times by the end of the fifth page - there are definite queries as to how suitable this is as a public transport read!)

Narrator Emily's voice is stunning - the perfect mix of likeability and frustration at her parents, who are (understandably) taking more notice of her newly born, as-yet-unnamed, sister than of her. This leaves Emily trying to deal with her own problems - most notably the upcoming school trip where, thanks to her best friend Bella having moved away, she's likely to be paired with Gross-Out Gavin. If she can only get friendly with new student Chloe, she could avoid this horrible fate - but Emily's bitter rival Zuzanna has the same idea. The pair of them trying to make friends with Chloe, who's perhaps not someone who's really a good friend to make anyway, is a hilarious story. Better than that, though, it looks at family, friendship, honesty, communication, and does so with some brilliant, memorable characters - considering it's not particularly lengthy, I thought the character development here for a number of Emily's classmates was wonderful!

Also, a quick note - this is aimed at the younger end of MG, with the LB website listing it as 8+. Others I've read for this age range include the Pea's Book series by Susie Day and Violet and the Pearl of the Orient, written by Harriet Whitehorn and illustrated by Becka Moor. All are fabulous, but I think there's perhaps more in Emily's voice to appeal to older readers than there is in the other two. (I've described this on Twitter as Pea's Book of Best Friends meets Have A Little Faith by Candy Harper - regular readers know just how much I love both of these two books. This definitely holds its own with them!)

Massively recommended; there are three more books on their way and I hope we get lots and lots more than the ones already announced.