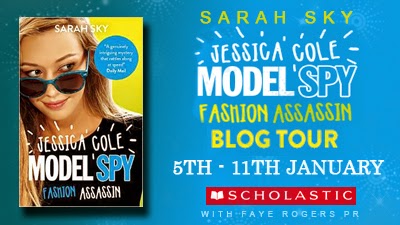 I have some brilliant posts coming up on classics this week (very appropriately, as I've just signed up for The 2015 Classics Challenge over at The Pretty Books!)

Firstly, Jessica Cole: Model Spy author Sarah Sky is here to celebrate the release of the second book in the series, Fashion Assassin, by giving us her top ten children's classics! 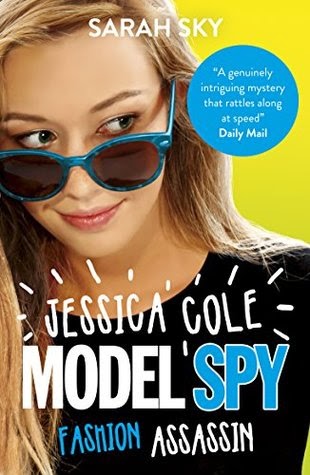 1 The Book: A Little Princess
The Author: Frances Hodgson Burnett
The Premise: Sara is an extremely privileged pupil at Miss Minchin's boarding school for girls in London. But when her beloved father dies in India, her fortunes are dramatically changed and she becomes a starving, abused servant at her own school. Only her imagination and a 'mysterious friend' can help her and fellow servant, Becky.
Why I Really Like It: I read this book over and over again as a child and couldn't get enough of Sara and her imaginary worlds. I was drawn to her ability to see good in even the worst of situations, as well as her unbreakable spirit, courage and kindness. I wanted to be her best friend.
Who It Will Appeal To: 9 plus. Girls who enjoy escaping to imaginary worlds and love princesses. As Sara said: 'If I am a princess in rags and tatters, I can be a princess inside.' However, I have to caveat this by saying I HATE the new paperback cover - don't let that put you off!

2 The Book: The Wolves Of Willoughby Chase
The Author: Joan Aiken
The Premise: Bonnie's parents depart Willoughby Chase for a Mediterranean holiday, leaving her and cousin, Sylvia, in the clutches of soon-to-turn evil distant relative and new governess, Miss Slighcarp, and the dastardly Mr Grimshaw. Sir Willoughby and Lady Green's boat sinks and the girls end up in an orphanage run by the even more ghastly, Mrs Brisket. The girls must escape and expose the villains for their crimes with the help of friend, Simon.
Why I Really Like It: Secret passages, ravenous wolves, evil governesses, escaping from terrible orphanages: what's not to like? Another book I read over and over again as a child.
Who It Will Appeal To: 11 plus. Adventure lovers who enjoy good versus evil battles, while romping through a dangerous, fictionalised history of England.

3 The Book: Anne of Green Gables
The Author: Lucy Maud Montgomery
The Premise: Brother and sister, Marilla and Matthew Cuthbert, were supposed to adopt a boy to help out on their farm but accidentally end up with chatterbox Anne. She wins them over and virtually everyone else in Bollingbroke, Nova Scotia, with her charm and imagination.
Why I Really Like It: I loved, loved, loved feisty Anne - her vivid imagination, love-hate relationship with gorgeous Gilbert whom she decks with a slate on their first meeting at school and her terrible calamities (including accidentally dying her hair black).
Who It Will Appeal To: 9 plus. Readers who like a feisty heroine who's not afraid to take on and literally beat the boys.

4 The Book: What Katy Did
The Author: Sarah Chauncey Woolsey writing under her pen name, Susan Coolidge
The Premise: 12-year-old tomboy Katy  Carr lives with her five brothers and sisters and widowed doctor father in 19th century America. She always gets into mischief and scrapes -rebelling against her strict Aunt Izzie. She ignores her order not to play on a swing and suffers a terrible accident, leaving her bedridden. Katy learns to cope with her suffering with the help of her beloved Cousin Helen and comes to realise that she can make a difference to her friends and family. She becomes a better person and ultimately learns to walk again.
Why I Really Like It: Katy is another feisty, gutsy heroine, like Anne of Green Gables - preferring to run about outdoors than be ladylike. I also loved the sequels What Katy Did at School and What Katy Did Next.
Who It Will Appeal To: 9 plus. Readers who like a strong willed heroine with a big heart.

5 The Book: The Ghost of Thomas Kempe
The Author: Penelope Lively
The Premise: James enjoys a idyllic childhood until a message appears on the blackboard advertising apples outside the family cottage. It says: 'Sorcerie, Astrologie, Geomancie, Alchemie, Recoverie of Goodes Lost, Physicke.' Soon, strange things start to happen and James is convinced he's being visited by the 17th century ghost of 'Thos. Kempe Esquire. Sorceror.'
Why I Really Like It: I always enjoyed a good ghost story as a child - and still do. This ghost is funny, but ultimately tragic - struggling to cope with the passing of time.
Who It Will Appeal To: 9 plus lovers of the supernatural.

6 The Book: The Magic Faraway Tree
The Author: Enid Blyton
The Premise: Jo, Beth and Fannie embark on adventures at the top of a tree in an enchanted forest and meet magical creatures including Silky the fairy, Moonface, Dame Washalot and Saucepan Man.
Why I Really Like It: I read the Faraway Tree series again and again and loved visiting all the different lands and meeting the weird and wonderful characters.
Who It Will Appeal To: 7 plus. Readers who love magical adventure stories. The books are likely to get a new audience as they are being adapted for the big screen by Sam Mendes' production company.

7 The Book: Mrs Frisby and the Rats of NIMH
The Author: Robert C.O'Brien
The Premise: Widowed mouse, Mrs Frisby's home is at risk when the farmer plans to plough their field. She can't move as her son, Timothy, is too poorly. They turn to rats, escaped from a human laboratory, for help in their time of need.
Why I Really Like It: Humans are the villains and rats are the heroes - you really root for the much maligned creatures, as well as Mrs Frisby and little Timothy.
Who It Will Appeal To: Animal loving children aged 9 plus.

8 The Book: The Owl Service
The Author: Alan Garner
The Premise: Three teenagers accidentally awaken a mythical Welsh woman when they find a set of plates covered in an owl pattern.
Why I Really Like It: Mysterious scratchings in the attic, strange happenings and a looming sense of menace, this book had me gripped - and spooked - as a child.
Who It Will Appeal To: 9+ Lovers of mythology, mystery and adventure.

9 The Book: Matilda
The Author: Roald Dahl
The Premise: Matilda is an exceptionally gifted girl who is treated terribly by her parents and horrid headmistress Miss Agatha Trunchbull. Teacher, Miss Honey, takes Matilda under her wing - and in return she helps her through her newly found, unexpected power of telekinesis.
Why I Really Like It: The underdog beats the bullies and Matilda's potential is unlocked through the power of education and kindness.
Who It Will Appeal To: 8 + Children who enjoy funny, uplifting stories where bad adults get their comeuppance.

10 The Book: The Tales of Olga da Polga
The Author: Michael Bond
The Premise: Guinea pig, Olga da Polga, leaves the pet shop and begins a new life with her owners, where she meets Graham the tortoise, Fangio the hedgehog and Noel the cat. With a vivid imagination, she tries to impress her new friends with her outrageous tall stories -

Olga the explorer, the prizewinner, the storyteller
Why I Really Like It: Far less well known than Bond's Paddington Bear, Olga da Polga is an endearing, sweet character in her own right.
Who It Will Appeal To: Children aged 7+ who enjoy animal stories.

Incredibly, I've actually read all TEN of those and would second nearly all of them -  especially Anne of Green Gables and The Wolves of Wiloughby Chase (and its sequels.)

For more from Sarah, keep up with her fab blog tour! Yesterday saw Faye at A Daydreamer's Thoughts give us 10 reasons to read this series, while Lucy at Queen of Contemporary reviewed on Monday. As well as being here today, Sarah's also on Serendipity Reviews, while tomorrow sees the tour stop off at Tales of Yesterday, one of my favourite newer blogs. Check out the tour banner on the right for details of the other stops this week. 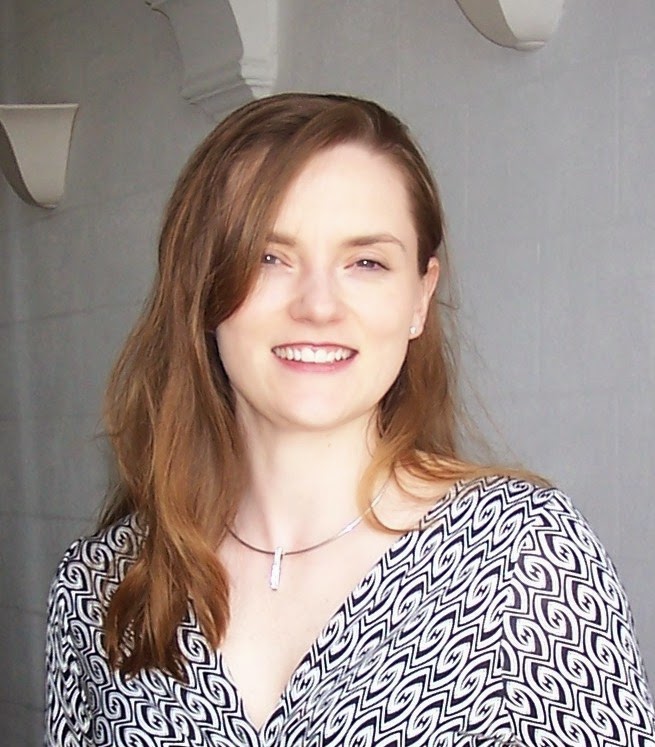 Sarah is a freelance education journalist and lives in West London with her husband and two young children.

She grew up in Sutton Coldfield, West Midlands, and studied English at Nottingham University before gaining a post-graduate diploma in journalism at Cardiff University.

She trained as a journalist at the Western Daily Press in Bristol. Her highlight was interviewing screen legend Charlton Heston and lowest point was being sneezed on by a cow at a fatstock competition.

Sarah worked as an education correspondent for a national newspaper before going freelance. She now divides her time between journalism and writing.

She loves reading, baking, table tennis and martial arts. She's a green belt in kick-boxing and a brown with two white stripes at karate, currently training for black.