I'm a big fan of Helen Eve's two books so far, so thought it was about time I shared my reviews (both previously published on The Bookbag) on this blog! Thanks to the kind people at Pan Macmillan for both of these.

(Please note: Stella was the first book published; Siena is a prequel. For maximum effect I would STRONGLY advise reading them in publication order!) 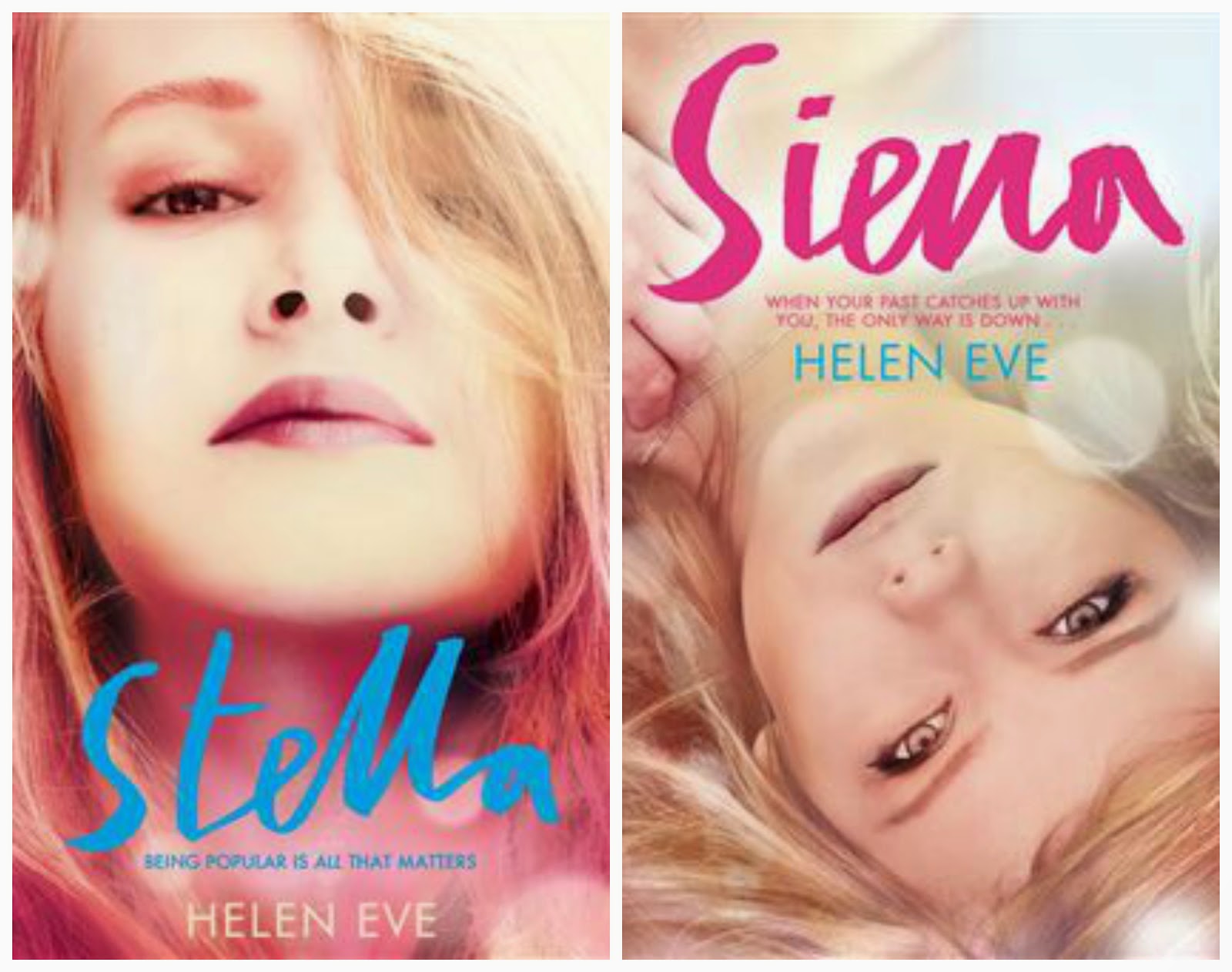 What do you get when you mix up Cecily Von Ziegesar's delightfully trashy Gossip Girl series with Dickens's classic Great Expectations, and throw in a splash of Animal Farm by George Orwell? A really readable YA contemporary story which has surprising depth and has been one I've been thinking about a lot since originally reading it towards the start of the year. I read Stella for the first time after getting it out of the library, and at the time I was extremely impressed by the voices of lead characters Stella and Caitlin, but had issues with it. On rereading, to prepare myself for upcoming prequel Siena, I think it's one of the relatively few books I've read recently which works even better second time around, although those issues haven't vanished completely.

The best part of the book is definitely the two narrators, who have excellent voices, their changing friendship, and the character development throughout the book. Stella starts the book as a consciously vain mean girl who is convinced she's better than anyone else around here. It's not even that she changes that much over the course of the book, but we see through her memories just what's shaped her into the character she's become, and it's a fascinating, if deeply disquieting, journey. Caitlin tells us in her first chapter that she should have beaten Stella to become Head Girl of Temperley High, but that the night instead ended with her picking jagged glass splinters out of her face. Nearly immediately, we're taken back to Caitlin's first day at Temperley as she enters the school an unknown, who's in awe of Stella and her clique the Stars. How did this quiet girl end up challenging the popular one? The rise (or fall, depending how you look on it, I think) of Caitlin is a stunning journey and I found it scarily believable.

My issues with the book are mainly that there are other parts which are less believable. The cliques, the Stars, and the way that the entire school are so obsessed with them doesn't quite ring true, and while it didn't feel as obviously over the top on the second reading as I'd thought it was originally, it's still jarring. (I should point out this feels like a deliberate choice for story effect, rather than poor writing, but I can see it not going down too well with people who weren't expecting it.) In addition, the ending is powerful but not completely convincing. My other issue with it is that so much of the story's strength is tied into the links to Great Expectations that I'm not 100% sure you'd get the full effect if you weren't aware of the story of the original. (I haven't actually read it, but I've at least seen several adaptations.)

Overall though, this is a strong debut, and has proven to be significantly more memorable than the vast majority of books I've read this year. I'm really excited about starting the prequel soon to find out exactly what happened to Stella's sister Siena!

Siena Hamilton rules over Temperley High, along with her clique the Starlets. Nothing can stand in her way – not even the return of ex-Starlet and her former best friend Romy, who spent a term in France after a shocking incident one night led to the headmistress deciding the girl needed to spend some time away from their school. If you've read Stella, you know roughly what happens here, but you don't necessarily know why. If you haven’t read it, I'd definitely suggest going for that one first. (There may be spoilers here, although I've tried to avoid anything too specific.)

I said when reviewing Stella that there were things about the school in the book - the cliques, the Stars, and the way that everyone else was so obsessed with them - that didn't ring true, but that this felt like a deliberate stylistic choice by the author. In this prequel, set five years before Stella, things are taken even further. For those who haven't read that book, it focused heavily on Stella's campaign to take her rightful place as Head Girl of Temperley High, with a level of staggering obsessiveness with the position that was like nothing I'd ever seen in a supposedly realistic YA novel. This shows us how the Head Girl position came to be so coveted, and there are intriguing reasons behind it. That's not to suggest it makes the campaign any more believable in retrospect - but it's so gloriously over the top that it's an intriguing look at what student politics could develop into if left completely unchecked. It's even less realistic than Stella was, and yet it somehow manages to also work as a tragedy.

In fact, I think it’s the knowing shallowness of much of the book which means that when things develop later on, it’s a change of tone which has a staggering impact. We know from both the other book and the first two pages of this one that Siena dies here, and yet the actual climactic scene is one of great power, making it a more emotional book than Stella was. While Stella was Gossip Girl meets Great Expectations, this starts with an extract from The Lady of Shallott, and you could suggest that like that titular lady, Siena is cursed – but it’s also an echo of the previous book and the central question of whether destiny can be changed, or if with a family like Siena’s and Stella’s, they were doomed from the start. Despite there being so many similarities with Stella’s story, it’s not one that feels repetitive; it’s compelling reading as we see just how Stella grew into the person she was in the book named after her, and what Siena’s influence on her was.

I found Siena to be just as strong, and fascinating, a character as her sister was in Stella - and it was interesting to see how her actions set Stella up to follow in her footsteps five years later. Romy, for me, was a nicer character than Caitlin was in the other book, easier to warm to but not as interesting. The two main villains here are pantomime-style baddies, but that fits in with the overall tone, making it hard to criticise this characterisation. Overall, it's definitely a better book than Helen Eve's debut was, and the pair of them, and the pair of them are well worth reading. Will Eve next give us the story of the third Hamilton sister, Syrena? Part of me thinks that it would be going to the well once too often; part of me has a feeling that if anyone could do it, Helen Eve could.

I will be extremely intrigued to see what Helen Eve writes next, whether it’s Syrena's story or something completely different. Fans of complex stories where there’s much more going on than meets the eye should definitely read both of these.
- January 17, 2015