Day two of my YA Yeah Yeah Year-Ends today, with three more shortlists! Check out day 1 here, and come back tomorrow for the last four categories. 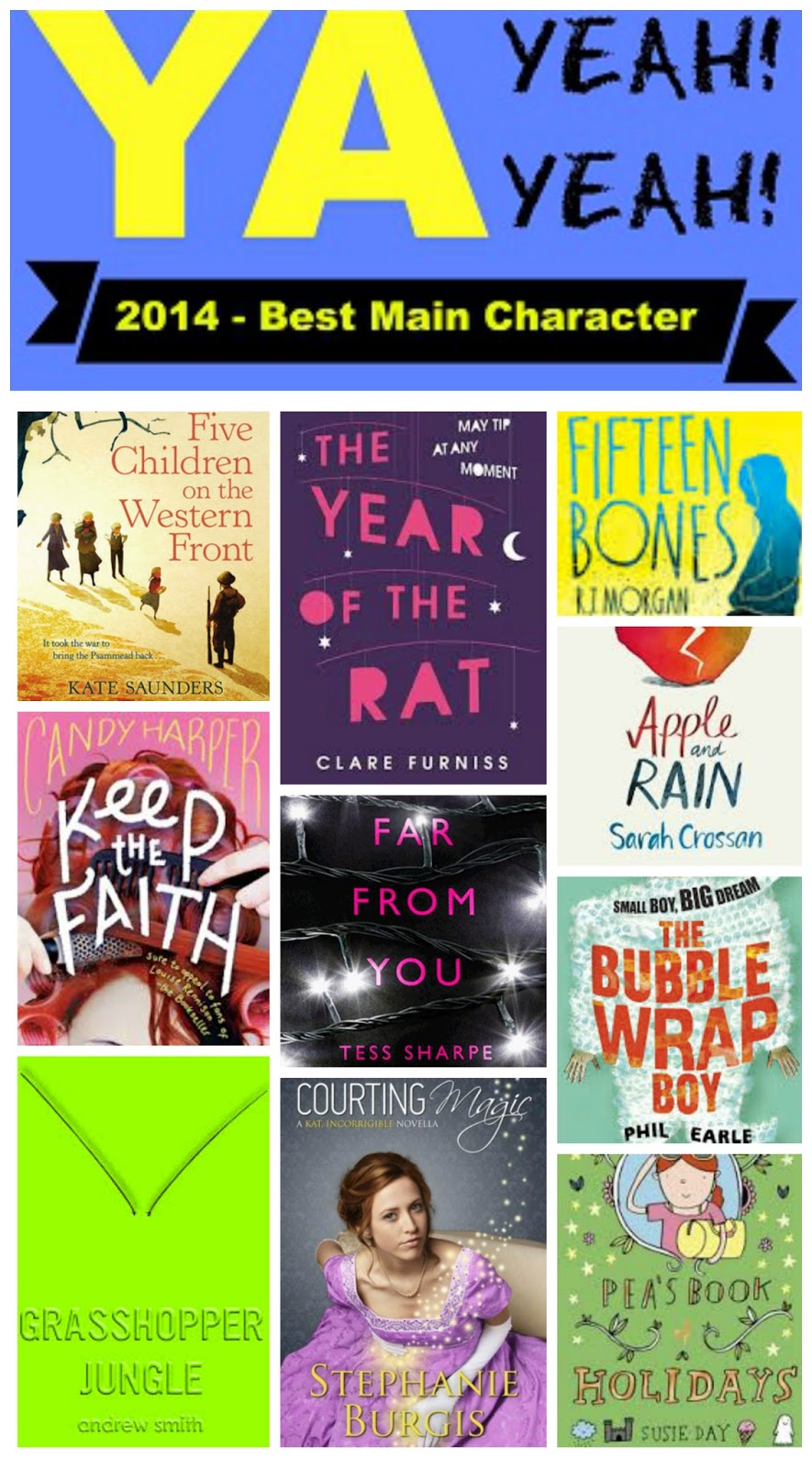 Kat Stephenson (Courting Magic by Stephanie Burgis)
Regular readers of my Twitter know my thoughts on bright, loyal, clever, and altogether awesome Guardian/witch Kat. Aged 18 and preparing for a society debut in this follow-up novella to one of the most wonderful MG series for many years, she is as brilliant as ever here.

Apple (Apple and Rain by Sarah Crossan)
This was a real tear-jerker; I felt incredibly sorry for Apple as she tried to reintegrate her mother back into her life while also coping with the two new boys she met, her grandmother who'd raised her, and a big surprise. She's a lovely character.

Pea (Pea's Book of Holidays by Susie Day)
Pea is another absolute favourite character of mine, and in this fourth and final book in the series (although spin-off soon, yay!) she's as lovely, sweet, and caring as ever. I adore the way she tries to hold her family together through any bad times, and think it's great that she doesn't get everything right but that she's always well-meaning, and her family love and support each other even when they make mistakes.


Charlie (The Bubble Wrap Boy by Phil Earle)
My favourite book yet from a stunning author, and Charlie is a fabulous main character - warm, clumsy, well-meaning, and optimistic despite his problems.
Pearl (Year of the Rat by Clare Furniss)
Pearl is an outstanding main character. There were times when I felt annoyed with her but I always thought she was sympathetic, not just because of the tragedy that had occurred but because she was trying to cope with it in her own way. Even when she was unsuccessful at times, and did things I didn’t like, I wanted her to learn to cope better and to start to find some comfort.

Faith (Keep The Faith by Candy Harper)
Returning after the brilliant Have A Little Faith, the title character here was even more fantastic in the second book. Faith is bratty, self-centred, surprisingly violent, and argumentative. But she's also clever, resourceful, good to her friends, knows what she wants, and goes all out to get it. She is a staggeringly great creation.

Jake (Fifteen Bones by RJ Morgan)
This is an example of dark topics done absolutely right. Jake, the narrator, is pitiable at first, withered like a prune and so broken by the accident that he finds even walking difficult, but the  developing friendship between him and tough girl Robin is superb, and the change we see in his character is fascinating.

The Psammead (Five Children on the Western Front by Kate Saunders)
I think it takes incredible skill to write another author's character really well, and Saunders delivers in spades here. Her Psammead is a much darker character than Nesbit's original, but he's recognisably the same character, and is a fascinating lead.

Sophie (Far From You by Tess Sharpe)
Sophie is a superb narrator - sent to rehab for an addiction she'd already beaten and finally out and ready to seek justice for her murdered best friend. I was completely torn apart by her troubles, and rooted for her to succeed in her quest to find the killer.

Austin (Grasshopper Jungle by Andrew Smith)
Austin is a wonderful narrator who genuinely cares about both girlfriend Shann and best friend Robby and struggles with his sexual and romantic feelings towards both of them, while he has an outstanding - if deliberately rather artificial - voice. 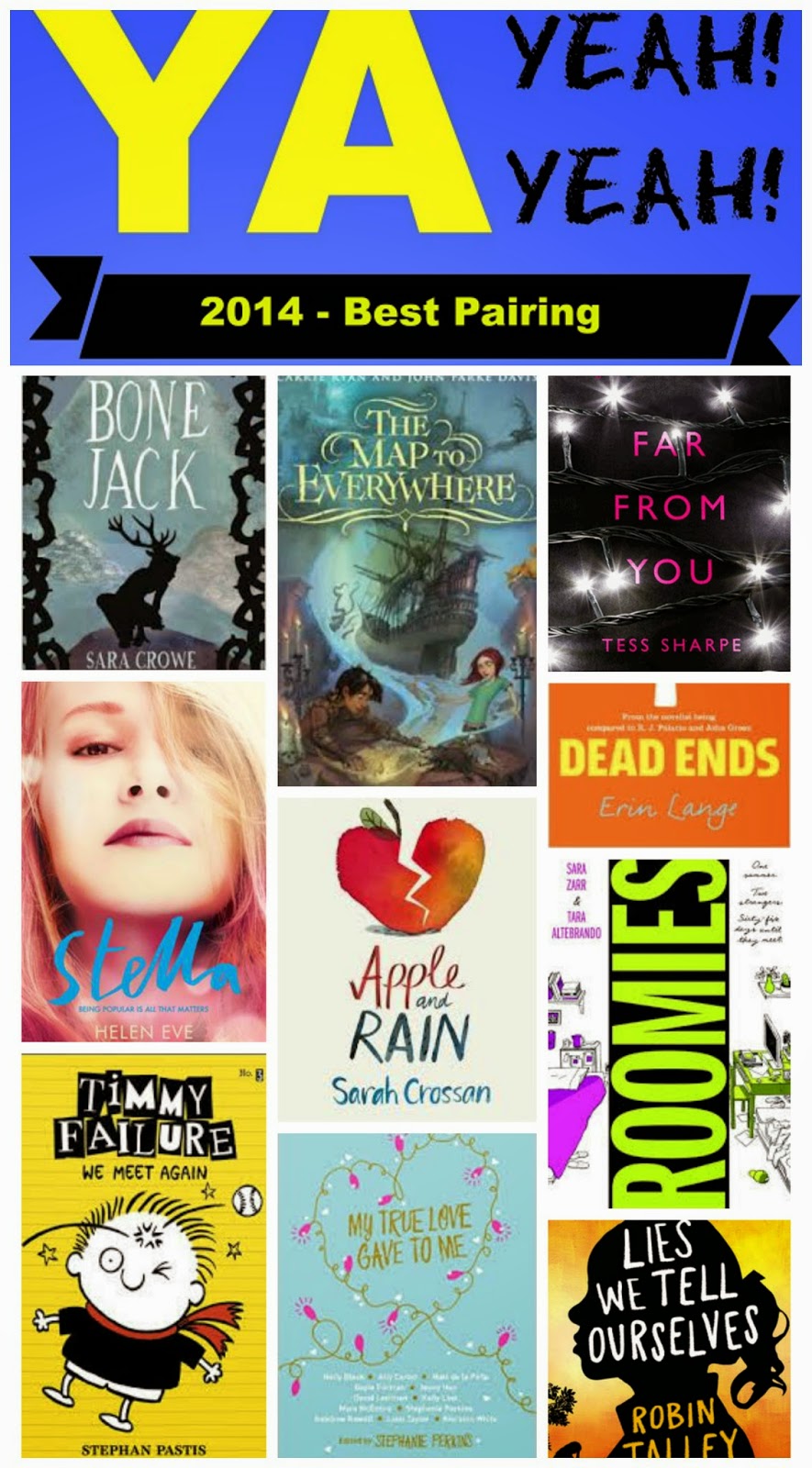 Apple and her mum (Apple and Rain by Sarah Crossan)
Apple is one of my favourite characters of the year, while her mother, who reappears in her life after abandoning her, is someone I really disliked. However I thought her mother was a believably poor parent, being thoughtless rather than actively nasty, which made her very interesting to read about.

Ash and Mark (Bone Jack by Sara Crowe)
Ash is a great main character, but it's his relationships with his father and his former best friend which give the book a lot more depth than I was perhaps expecting - both are superb. My favourite of the two is the antagonistic way Ash and Mark interact, which feels incredibly realistic for two people once so close.
Stella and Caitlin (Stella by Helen Eve)
I have a real liking for unusual pairs of dual narrators (rather than the more standard love interests) and this couple - Stella, the seventeen-year-old leader of exclusive clique The Stars, and Cailtin, the shy and quiet new girl who starts her first chapter by talking about the night on which she should have beaten Stella to become Head Girl, are one of the most intriguing for a while.

Sophie and Russell (What The Hell Have You Done, Sophie Roth? by Gayle Forman, a short story in the anthology My True Love Gave To Me edited by Stephanie Perkins)
In a relatively short story, Gayle Forman does an incredible job of creating brilliant chemistry between her two leads, Jewish Sophie and African-American Russell, who both feel like outsiders at their WASPy college.

Dane and Billy D (Dead Ends by Erin Lange)
This friendship is a masterful portrayal of two boys who initially become mates through necessity and eventually grow to really like and respect each other. In particular, Dane’s frustration when Billy D is treated differently because of his Down’s Syndrome is very well-written – and it’s all the more interesting that despite it irritating him when other people do it, he still falls into that trap himself at times.

Timmy and Total (Timmy Failure series by Stephan Pastis)
I completely adore polar bear Total, and the relationship between him and lead character Timmy, his business partner, is nearly unbearably poignant at times.

Fin and Marrill (The Map To Everywhere by Carrie Ryan and John Parke Davis)
Fin, the master thief who nearly everyone forgets as soon as he's out of sight and Marrill, the girl dragged from our world who's somehow able to recall him, are my two favourite characters in the outstanding cast here. I love the friendship that develops between them here.

Sophie and Mina (Far From You by Tess Sharpe)
The relationship between Mina and Sophie has incredible chemistry and made me really care about both of them - which was rather soul-destroying as we know from the start that Mina is dead!

Sarah and Linda (Lies We Tell Ourselves by Robin Talley)
The best thing of the many excellent parts of this book is the central relationship between Sarah and Linda, whose growing attraction to each other is forbidden on two levels, partly because of their different races and partly because they’re the same sex. The pair of them coming to terms with their feelings for each other is brilliantly handled and they both develop well as characters over the course of the book - particularly Linda, who's hard to warm to at first given her ingrained racist views but whose change over the course of the book is both heartwarming and completely believable. There's great chemistry between them, as well. Both of the leads are excellent narrators with really strong voices.
EB and Lauren (Roomies by Sara Zarr and Tara Altebrando)
Sara Zarr and Tara Altebrando really seem to get how difficult it is to form a friendship online, having to judge what a person's saying from their words alone without the benefit of tone or body language. EB and Lauren open up to each other more and more as the book goes on, but is it possible to be really good friends with someone you haven't even met? 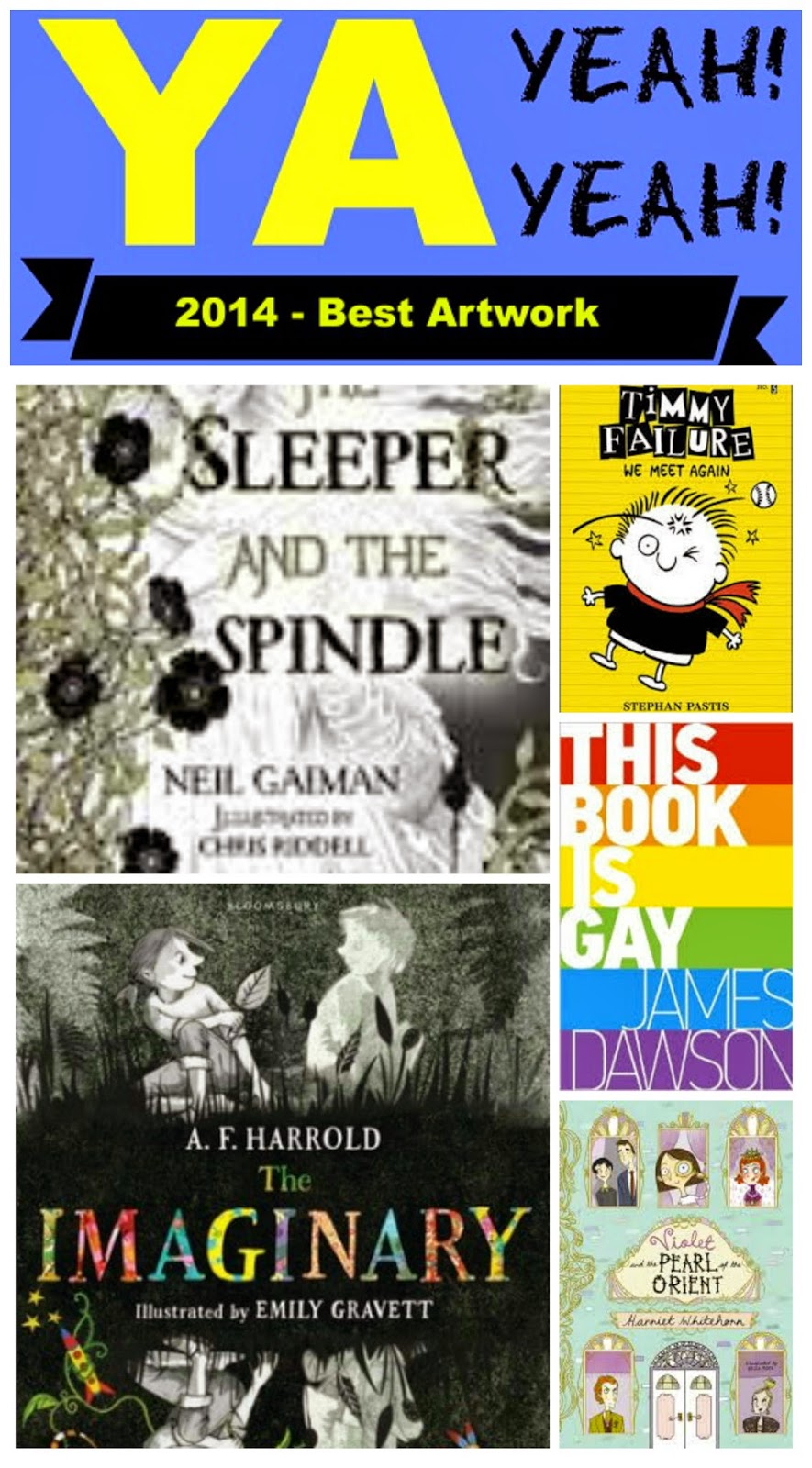 The Imaginary (written by AF Harrold, illustrated by Emily Gravett)

I adored this book, partly because it's so well-written and partly because Gravett's art is breathtaking. Mainly black and white but with splashes of colour - the villain's Hawaiian shirt, the bright pink dinosaur, and others - it features lots of stunning spreads.

Violet and the Pearl of the Orient (written by Harriet Whitehorn, illustrated by Becka Moor)
I fell in love with this one right from the brilliant double-page spread in which we see the characters and their favourite foods. Becka Moor's two-colour illustrations are wonderful.

The Sleeper and the Spindle (written by Neil Gaiman, illustrated by Chris Riddell)
Similarly to The Imaginary, this is mainly black and white but with splashes of colour - although in this case it's a single extra colour, gold. Riddell is a phenomenally talented artist; I love his work on his own Goth Girl, but this is the best I've seen from him.

This Book Is Gay (written by James Dawson, illustrated by Spike Gerrell)
Spike Gerrell's funny cartoons are the perfect additions to James Dawson's wise and humorous writing in this fantastic guide for teens.

Timmy Failure series by Stephan Pastis
Simpler than most of the other in the top five, but Pastis has created some fantastic characters here and Timmy and Total, in particular, are brought to life extremely vividly.
- December 27, 2014